A Midcentury Home in Malibu Shines After a Radiant Renovation

Studio Bracket Architects turn a 1949 International Style home into an ideal escape for a couple who collect pre-war American automobiles.

In 1949, the Malibu Crest house was raised on a hillside knoll with views of Malibu Lagoon to the south and the Santa Monica Mountains to the north. It was the most desirable spot on the hillside, and the first house as far as the eye could see. Designed in the popular International Style of the time, Malibu Crest was built with a flat roof, clean lines, broad overhangs, and lots of glass. 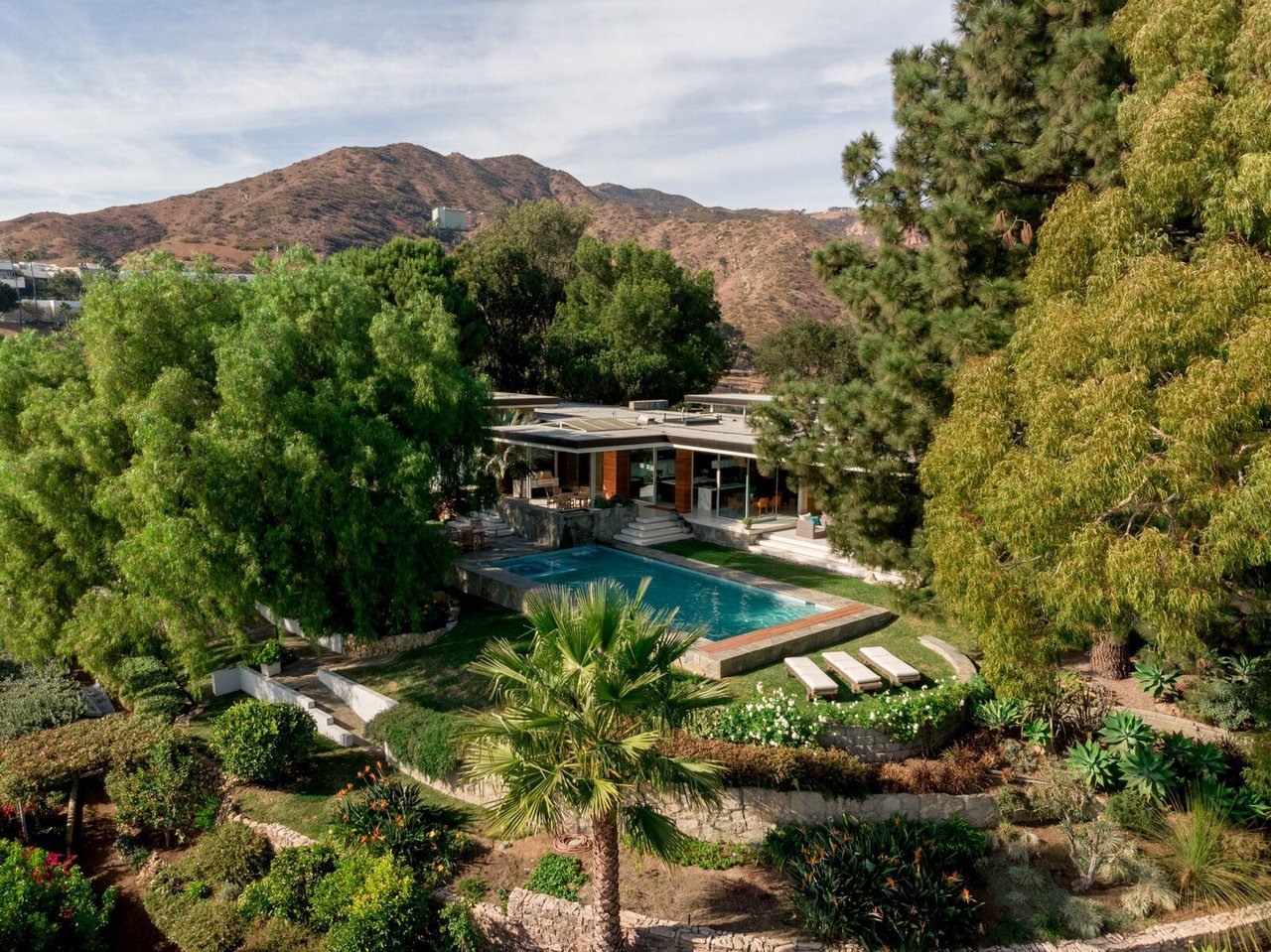 The Malibu Crest residence has the most desirable spot on the hill because it was the first house built there in 1949.

By the time Sam and Emily Mann bought the home in 2008, "it had some really cool bones, but it was kind of a hodgepodge of additions over the years, and showed a lack of rigor with the materials," says Wayne Chevalier of Studio Bracket Architects. Project designer Wayne Chevalier kept automobile elegance in mind as he remodeled the Malibu Crest residence. Here, he exits a Genesis GV80 parked in front of the garage.

He and Adin Dunning were hired by the Manns to remodel the home to suit a modern lifestyle and serve a perfect vacation escape, as the Manns reside in New Jersey most of the year. To do that, Chevalier and Dunning referenced a set of black and white photographs (provided by a relative of the original owner) of the Malibu Crest residence in its 1949 glory. 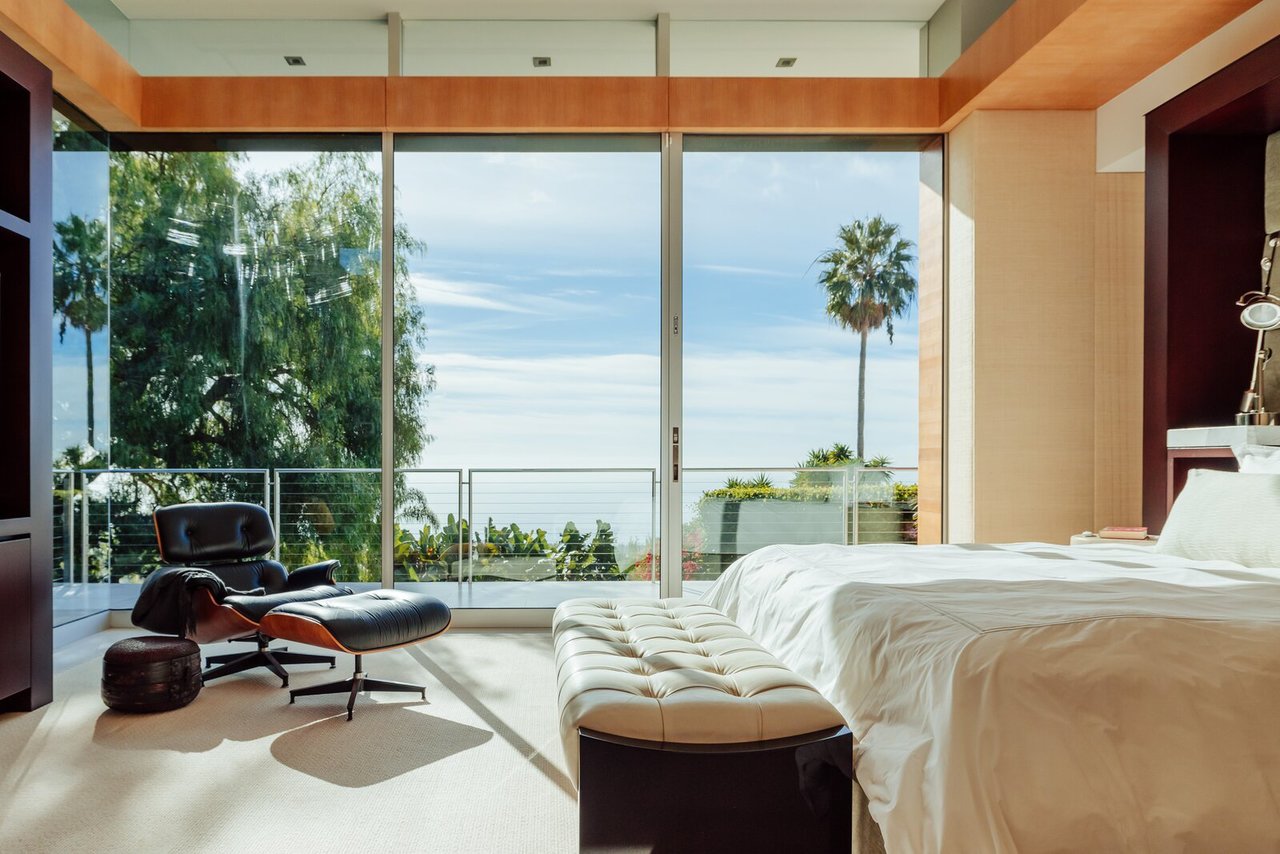 Natural light and great views are an added bonus to this cozy bedroom.

"The house definitely pays respect to the original house, but it’s also a completely new thing. It lives better. I think it works better," says Chevalier.

When Chevalier and Dunning got to work, they had a residence with small rooms and a tiny kitchen at the back of the house with a little window that looked into a courtyard. The layout lacked an element of flow, and it didn’t fully utilize the stunning views of the location. 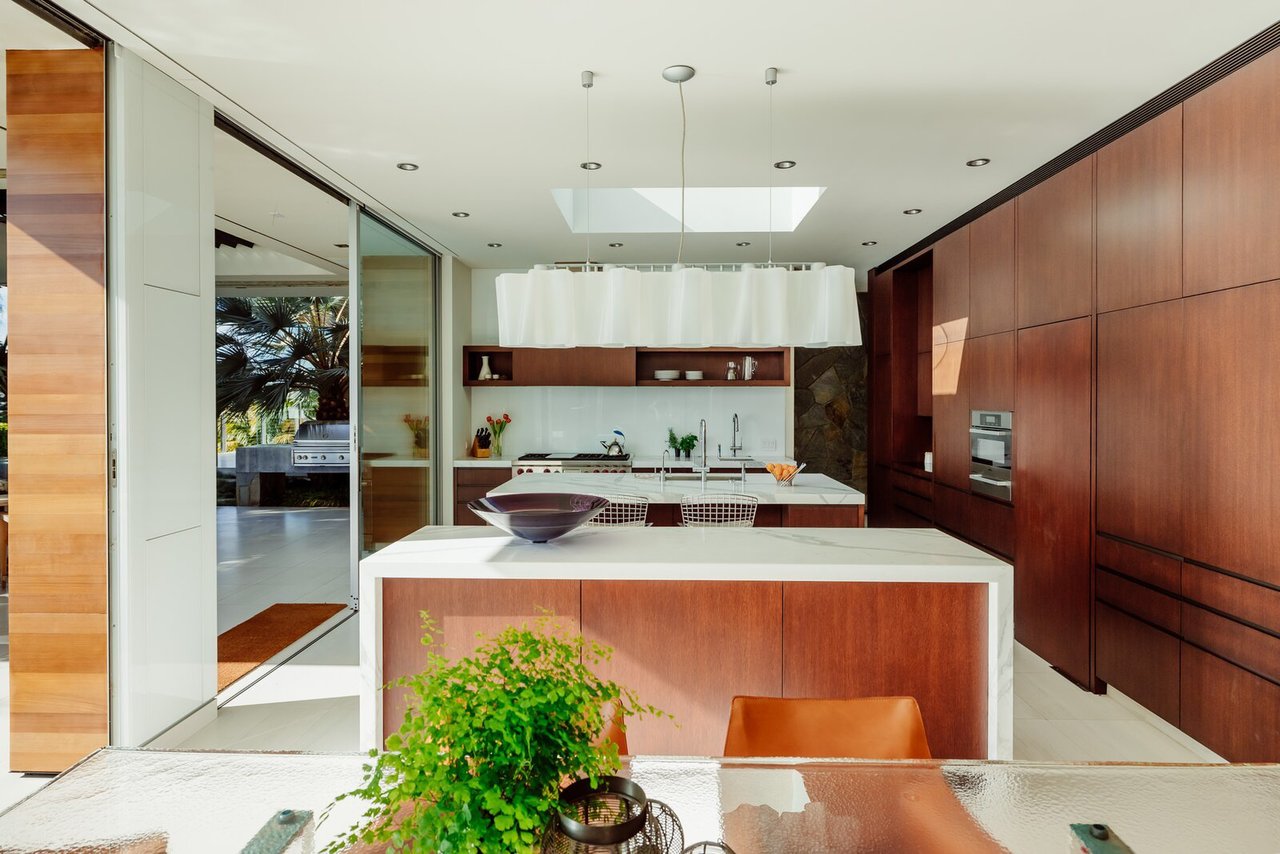 The kitchen was previously located in a dark hallway at the back of the house, but now it’s the core of the home.

To remedy these setbacks in the design, the architects raised the ceiling in places, adjusted the layout to create an open floor plan, added square footage to the main bedroom, and moved the kitchen and dining room to the front of the house. The kitchen became a "utility core" that the whole house circulates around. 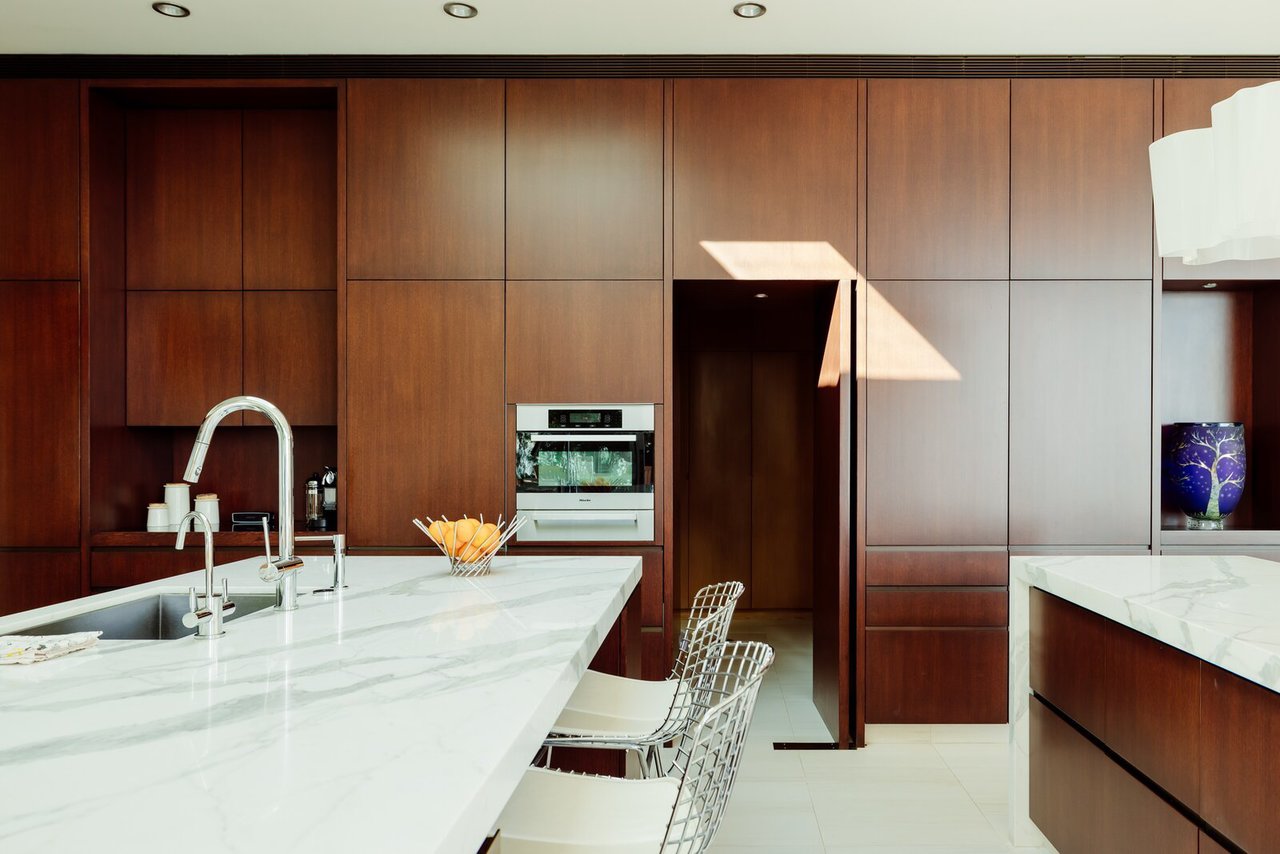 A laundry and powder room are hidden behind artful wood paneling.

"Hidden within the utility core are a lot of the everyday functions of a house," explains Chevalier. "There’s a powder room and a laundry room in there. There’s mechanical ducting. But we didn’t want to see any of that stuff, and we wanted it to read as a mass-as a cabinet." When closed, the doors to the powder and laundry rooms sit flush amidst the cherry wood paneling. Overhangs blur the line between indoor and outdoor spaces at the Malibu Crest residence.

Design decisions, such as the hidden doors of the powder and laundry rooms, were often instigated by the Manns, who Chevalier says were very involved in the remodel. They also weighed in on the style of screws, and suggested operable louvers on the overhangs to track the sun and provide shade. 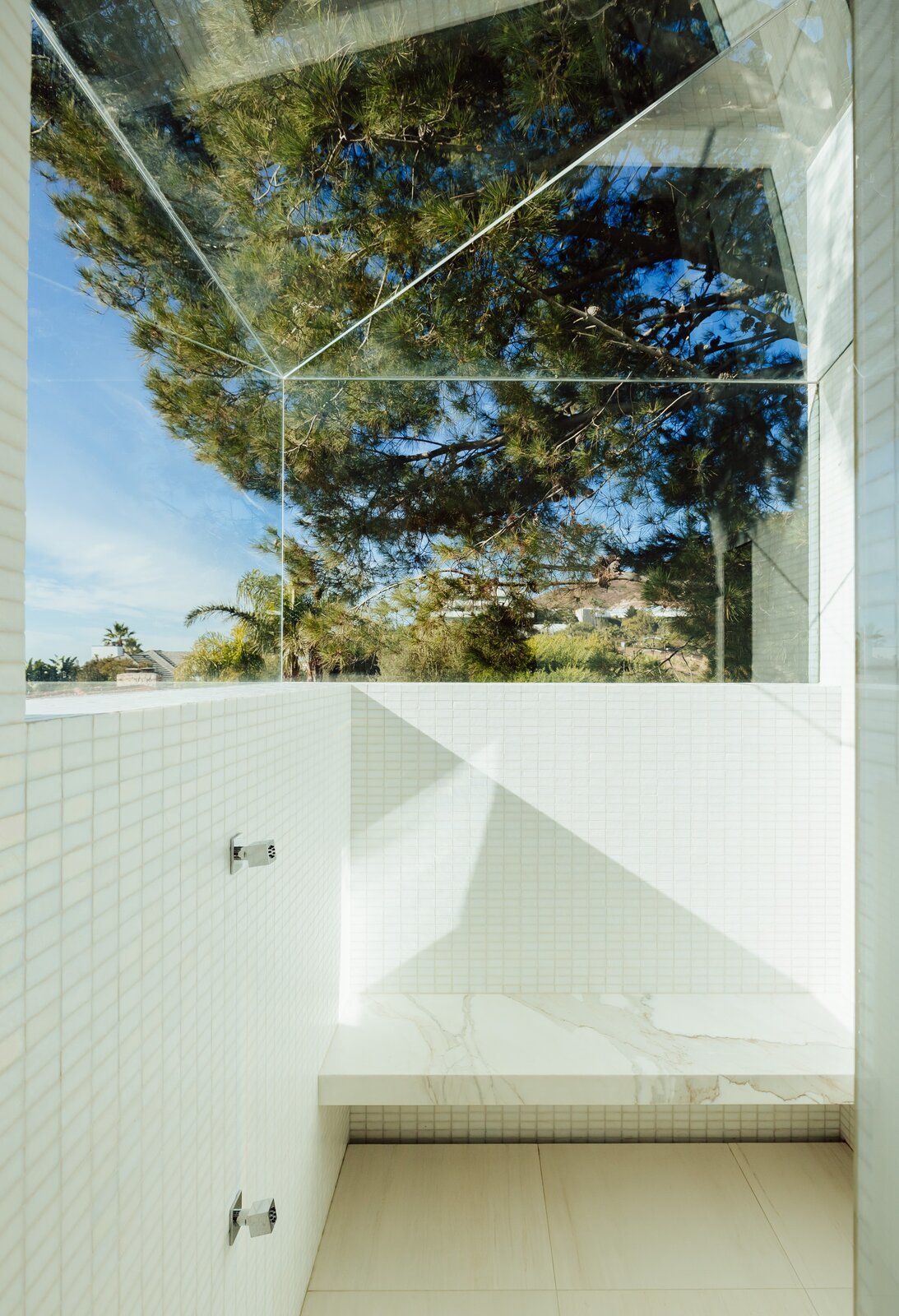 There is a spa-like quality to this shower, with its marble seating, white tile, and faceted glass enclosure.

"They have a very sophisticated design sense. Sam’s an industrial engineer, Emily is an artist, and they have a strong design eye," says Chevalier. "Subtlety is something that is really important to them, and it has to do with the idea of elegance." 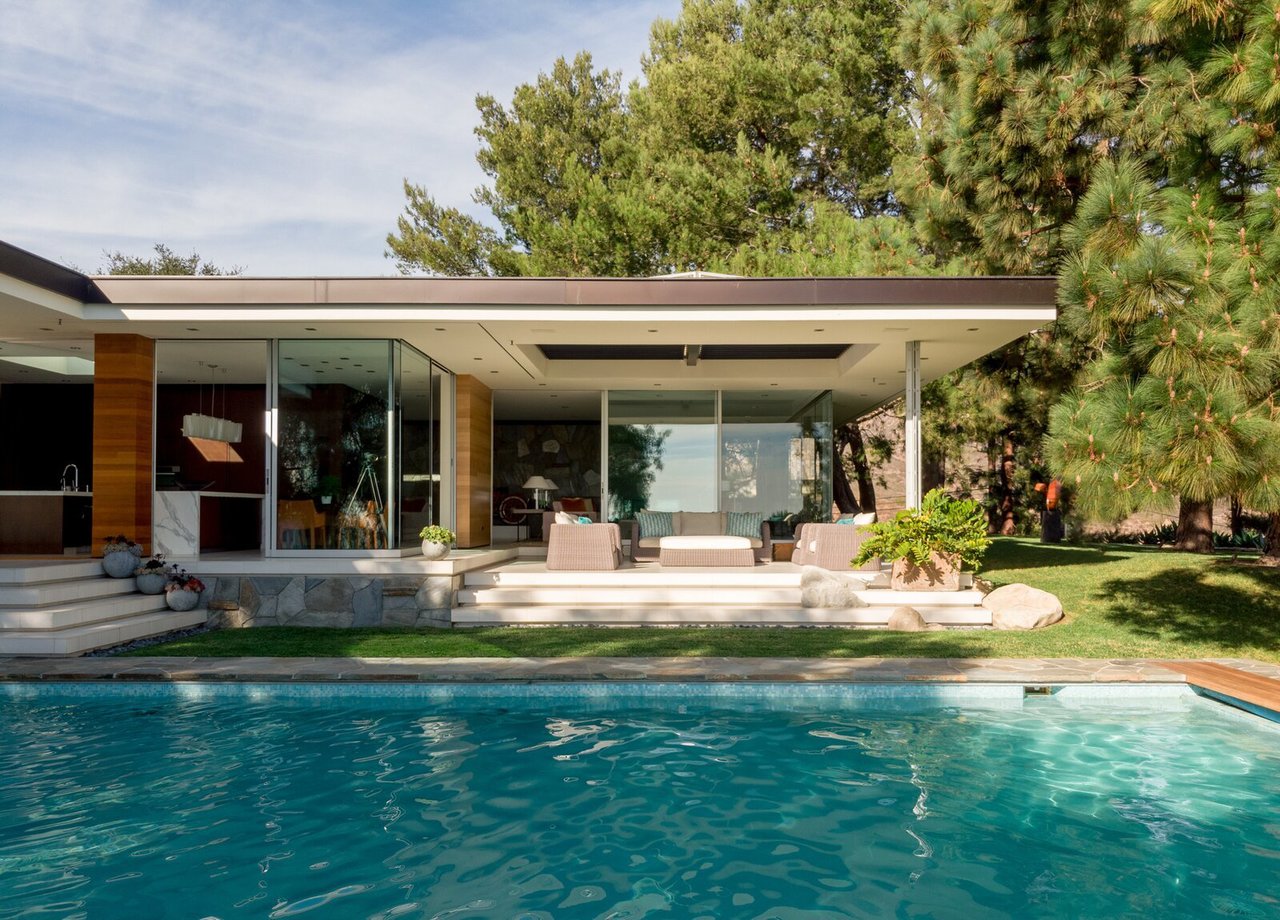 There are two subtle elements of note in the remodel. The first is the exterior bouquet canyon stone-a nod to the home’s midcentury material palette-and the second is the home’s vast arrays of windows. "One of the things we wanted to do was get more light into the house, because even though the original home had a lot of glass, it was still relatively dark," says Chevalier.

The architects replaced walls in the bedrooms, bathrooms, and kitchen with large glass panels, connecting the interior with calming outdoor areas that include a pond, swimming pool, patios, and lush greenery. Skylights throughout the house bring in light, highlighting the Manns’ art glass collection. One of the home’s original exterior walls now serves as an interior wall. Skylights were added when the ceiling was raised in certain areas of the home.

Chevalier and Dunning also took into account Emily and Sam’s collection of pre-war, American antique cars, which the couple show at the Pebble Beach Concours d’Elegance every year. 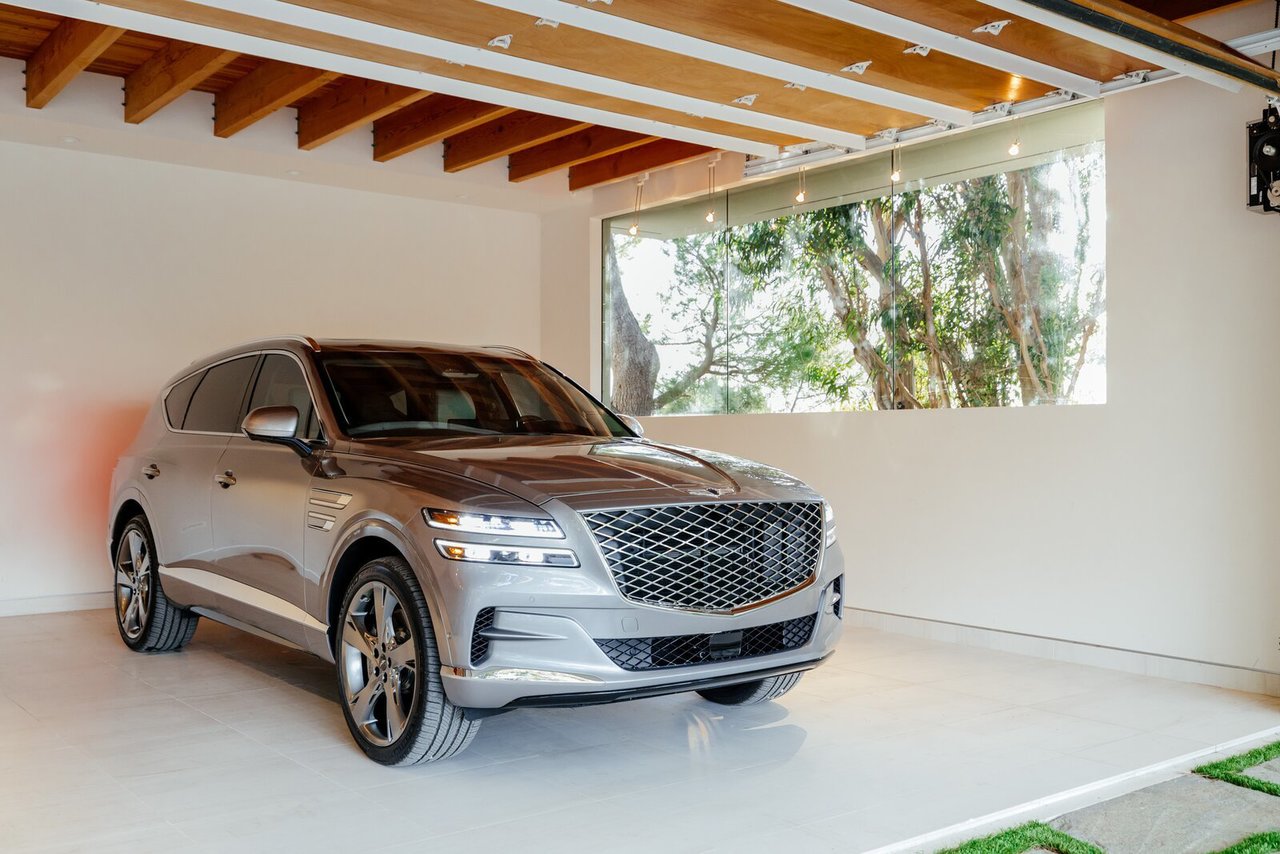 The garage is an integral part of the architecture with its exposed wooden beams and large picture window. Natural light fills the interior, where a Genesis GV80 is parked. Preproduction model with optional features shown.

"One of the things they’re particularly drawn to is the elegance of pre-war automotive design," says Chevalier. "We didn’t want the garage to be an afterthought-it’s unapologetically part of the design of the house, and we wanted to celebrate the automobile in a way that is appropriate to its importance in Sam and Emily’s life." 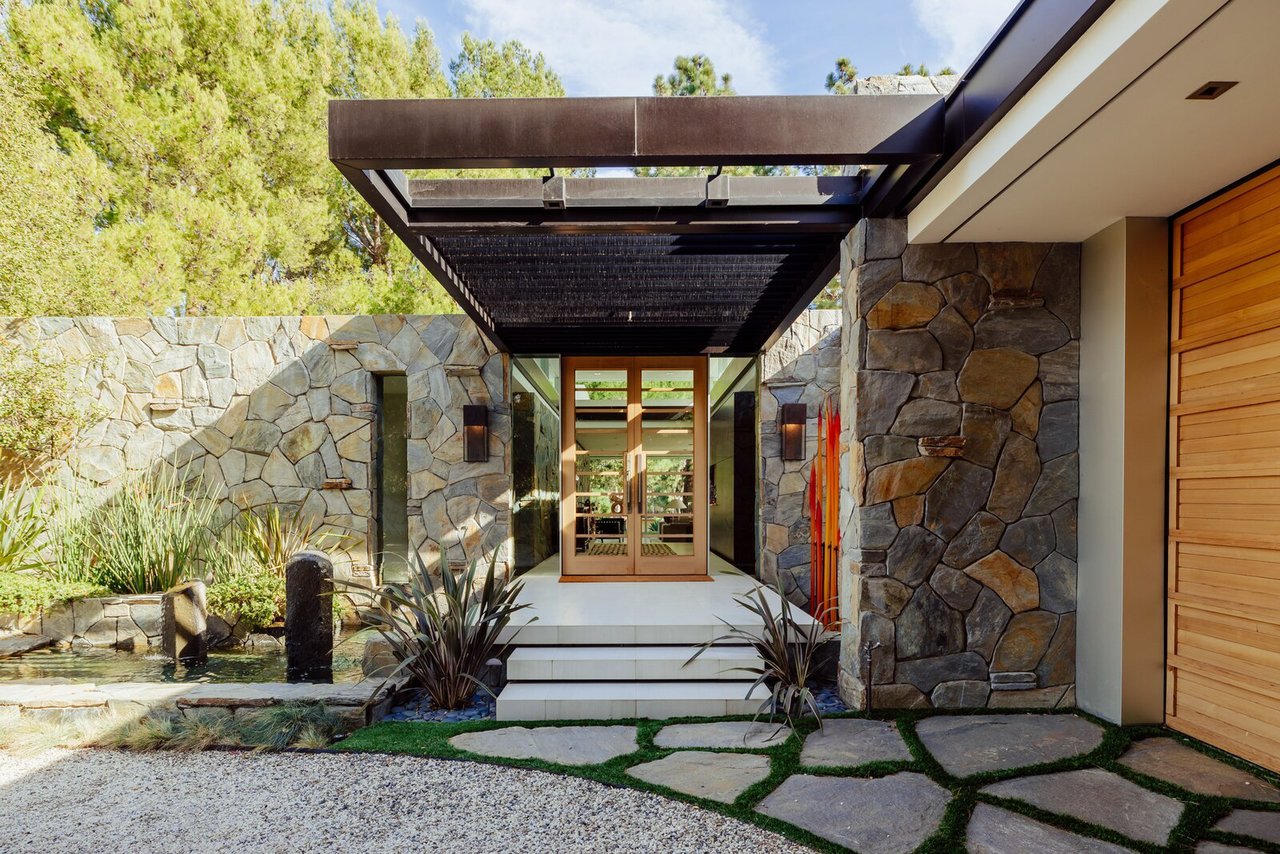 The bouquet canyon stone pays tribute to the midcentury-modern era when the home was built.

In the 1960s, the carport had been transformed into a laundry room and a two-car garage, but Chevalier and Dunning turned it into a four-car garage with wood-paneled sliding doors, exposed wooden beams, and a window. The result is a posh and sophisticated extension of the home where "classic cars can be housed in a way that is fitting to the quality of these vehicles," says Chevalier. 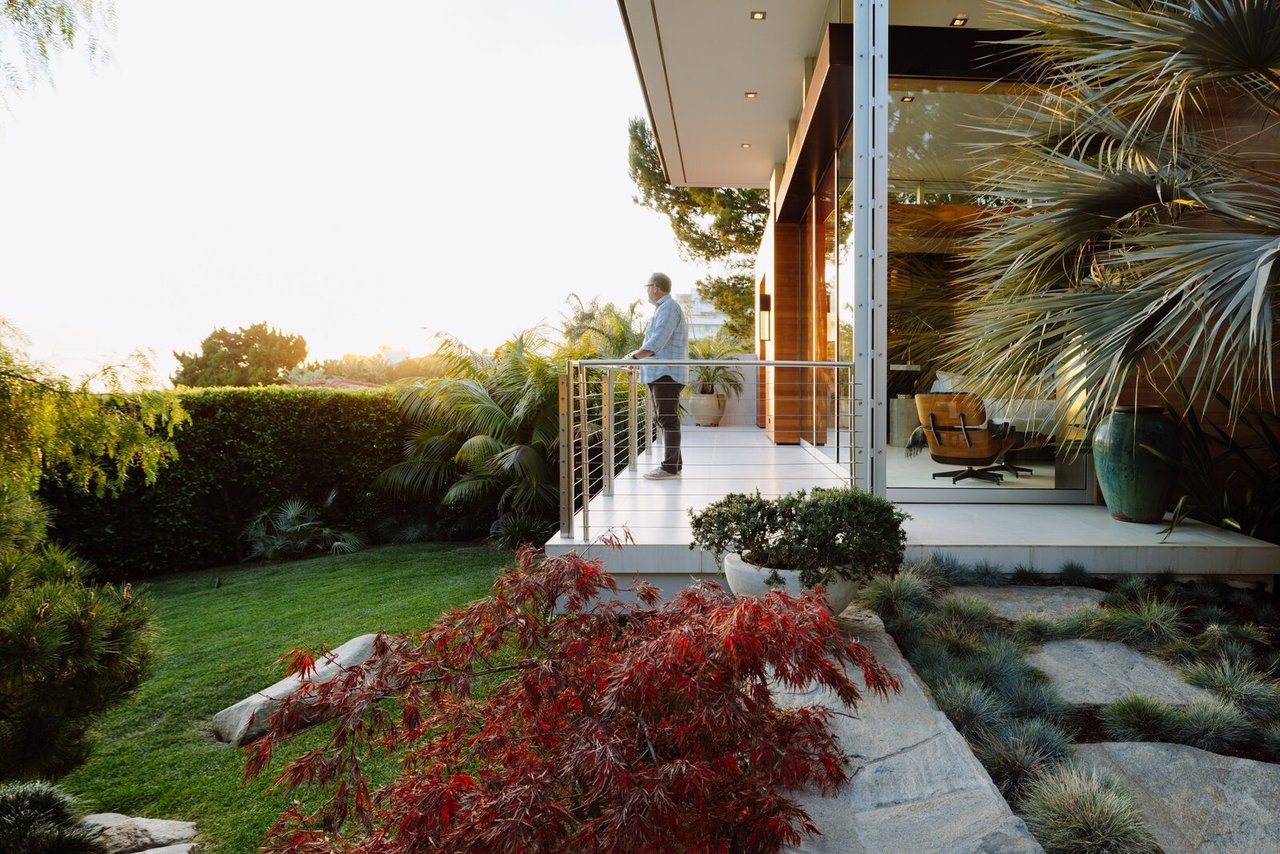 It took about three-and-a-half years for Studio Bracket Architects to turn the Malibu Crest residence into a modern and dynamic retreat for Sam and Emily Mann. Much of that time wasn’t spent making huge changes, but celebrating the elegance of the original design through thoughtful and precise decisions. 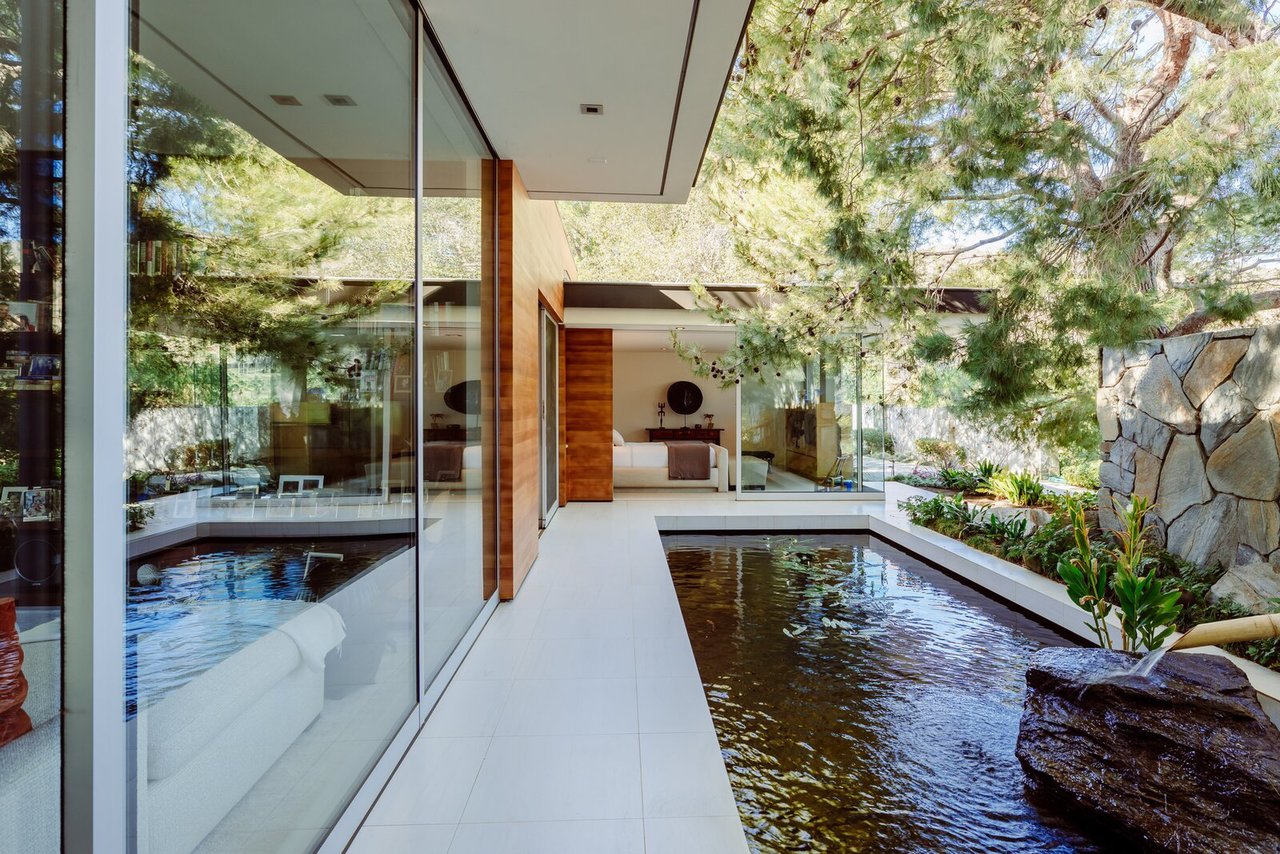 histicated landscape of greenery and water elements add to the escapist nature of the home.

As Chevalier says, "We always try to create fewer elements rather than more elements. I think that’s where the elegance lies-when you can say more by doing less."