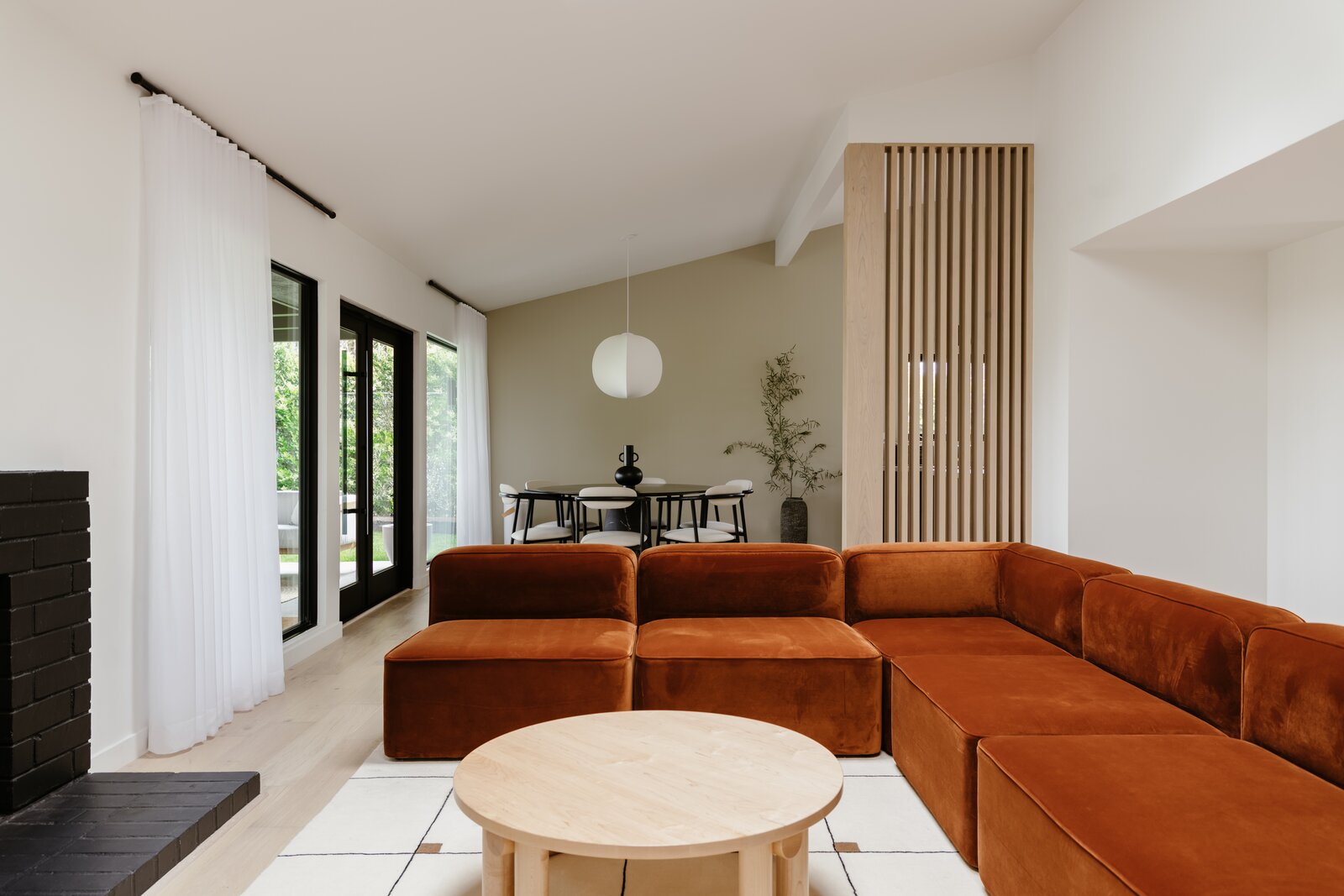 A Midcentury Home in L.A. Gets a Japandi–Inspired Refresh

Dubbed the Zen Den, this serene home by the creative duo behind Working Holiday Studio is brightened with an infusion of natural light and now serves as the couple’s personal residence and design showroom.

After a multi-year search for the perfect midcentury gem to remodel, Los Angeles–based designers Whitney Brown and Carlos Naude stumbled across a neglected 1960s ranch-style home in nearby Woodland Hills and immediately placed an offer on the listing. "The house was a diamond in the rough," says Carlos. "It had great bones-it just needed to be brought back to life." 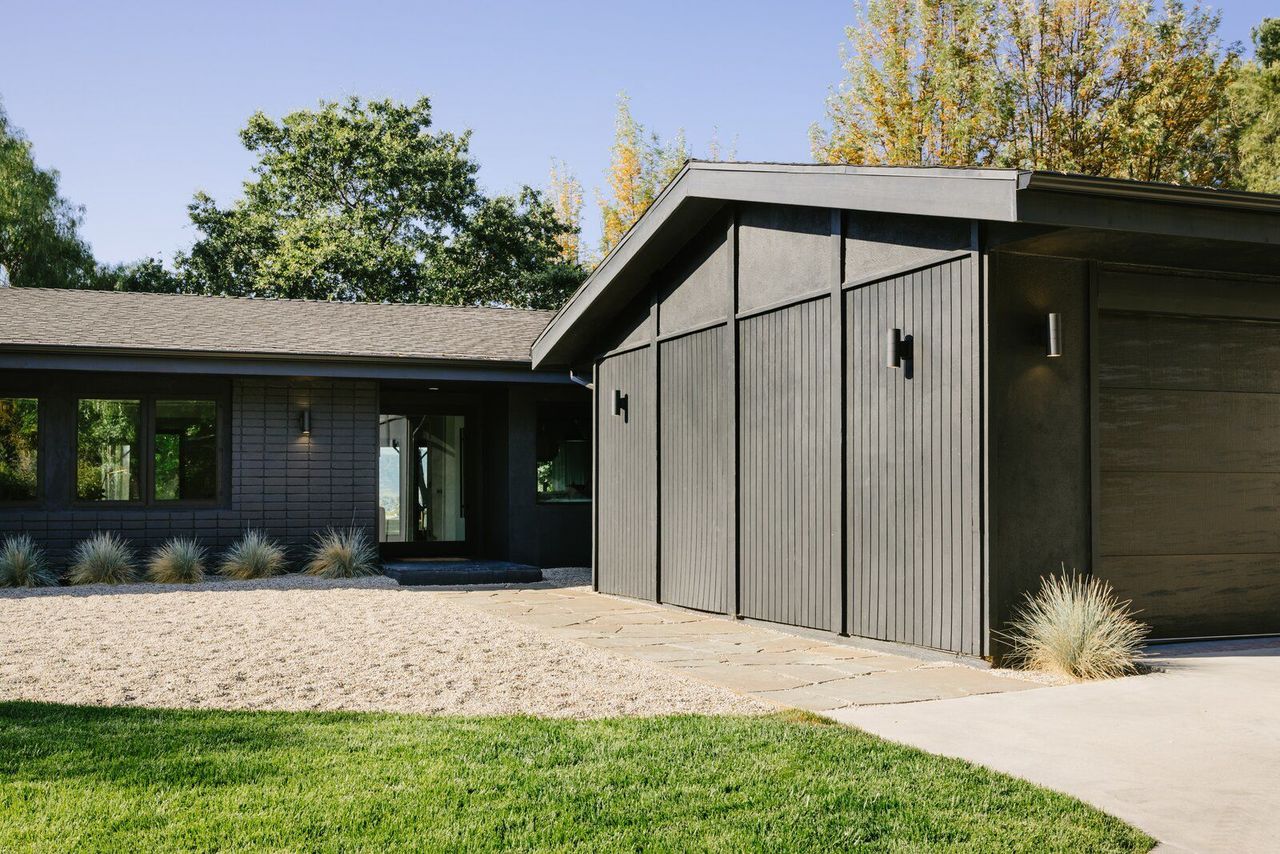 As part of the remodel of this 1960s home in Los Angeles, the owners painted the exterior a dark charcoal hue and landscaped the property with native, low-maintenance plantings. 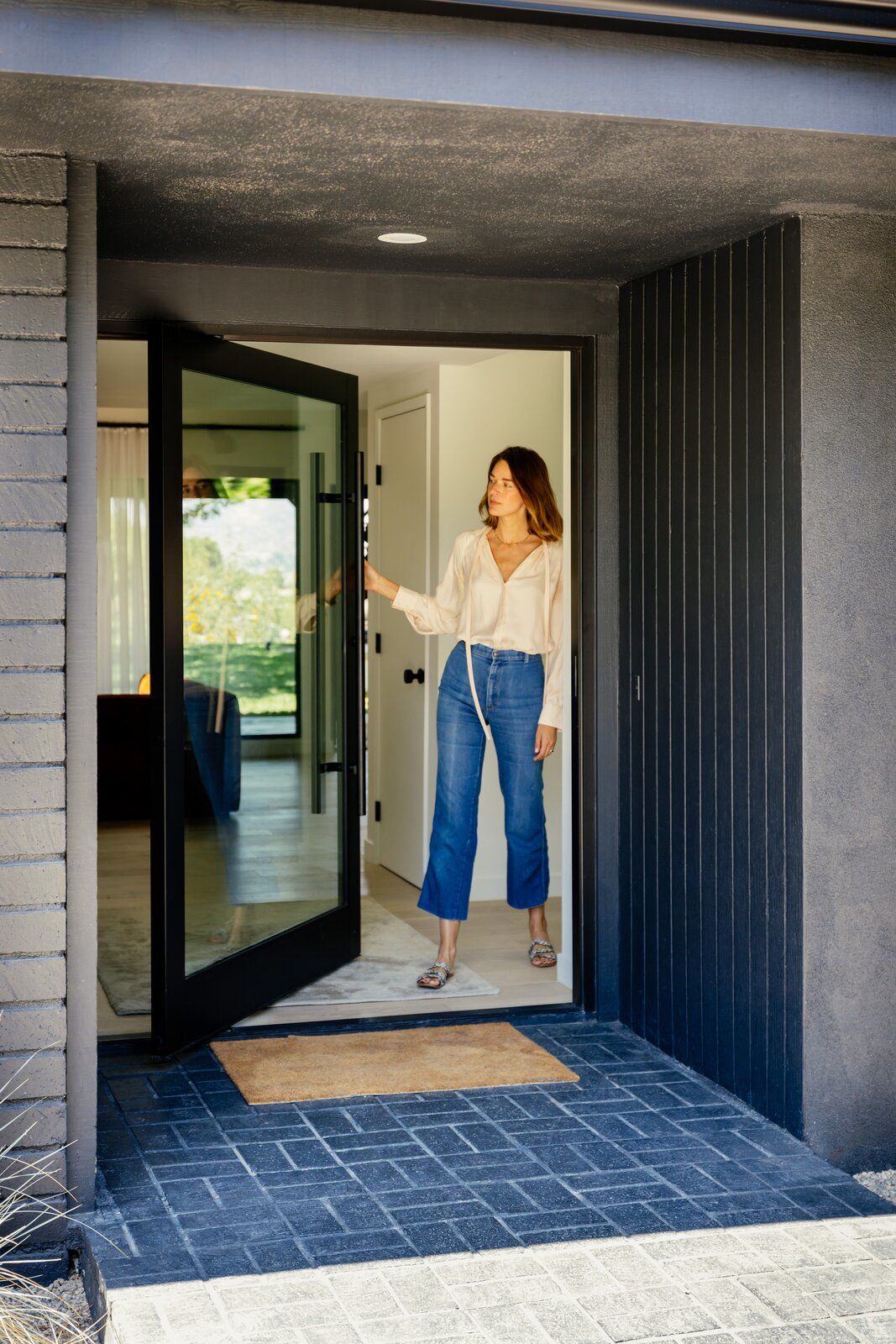 The couple replaced the original wooden entry door with a pivoting glass door to create greater indoor/outdoor connection and let in more light.

Fortunately, the young couple, who are founders of the design firm Working Holiday Studio, were up to the challenge. They had a wealth of renovation experience after having designed two other high-profile projects: Casa Mami, an Airbnb venue in Joshua Tree, California, and The Ruby Street, a converted church in Highland Park, Los Angeles, that now serves as an art venue. 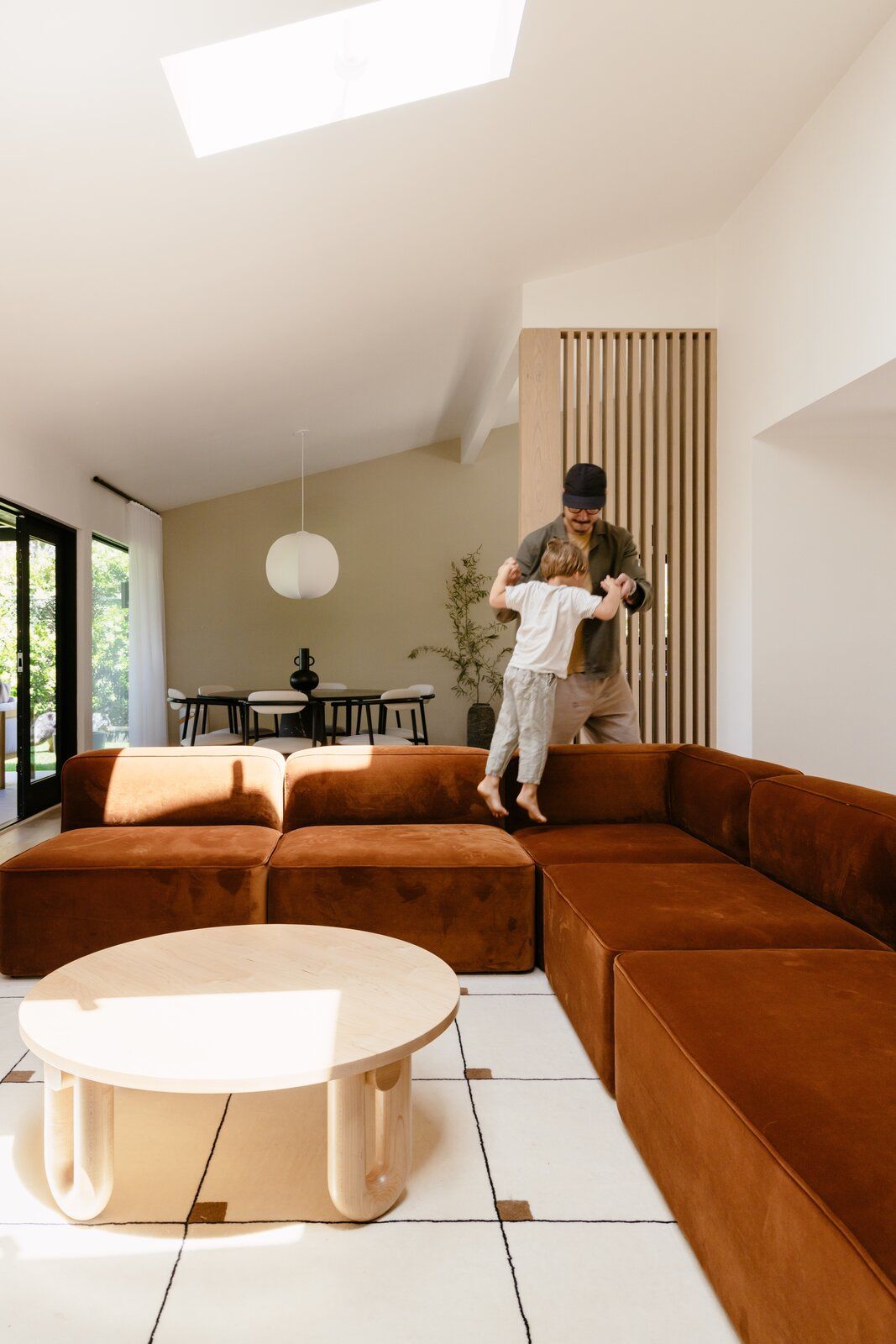 Carlos plays with his son, Rico, in the living room. "Initially we wanted a white couch, but knew that wouldn’t work with a three-year-old," says Whitney. "Instead we chose a sofa in an accent color that would stand out."

The couple sought to "create a place that felt very serene and calming," says Whitney, explaining why they named their home the Zen Den. "We’ve always been inspired by the sleek minimalism of Scandinavian and Japanese designs," she adds, noting they also integrated Mexican influences into the space as a way to celebrate Carlos’s heritage. Carlos says, "Overall, we wanted the house to be soothing and easy on the eye." 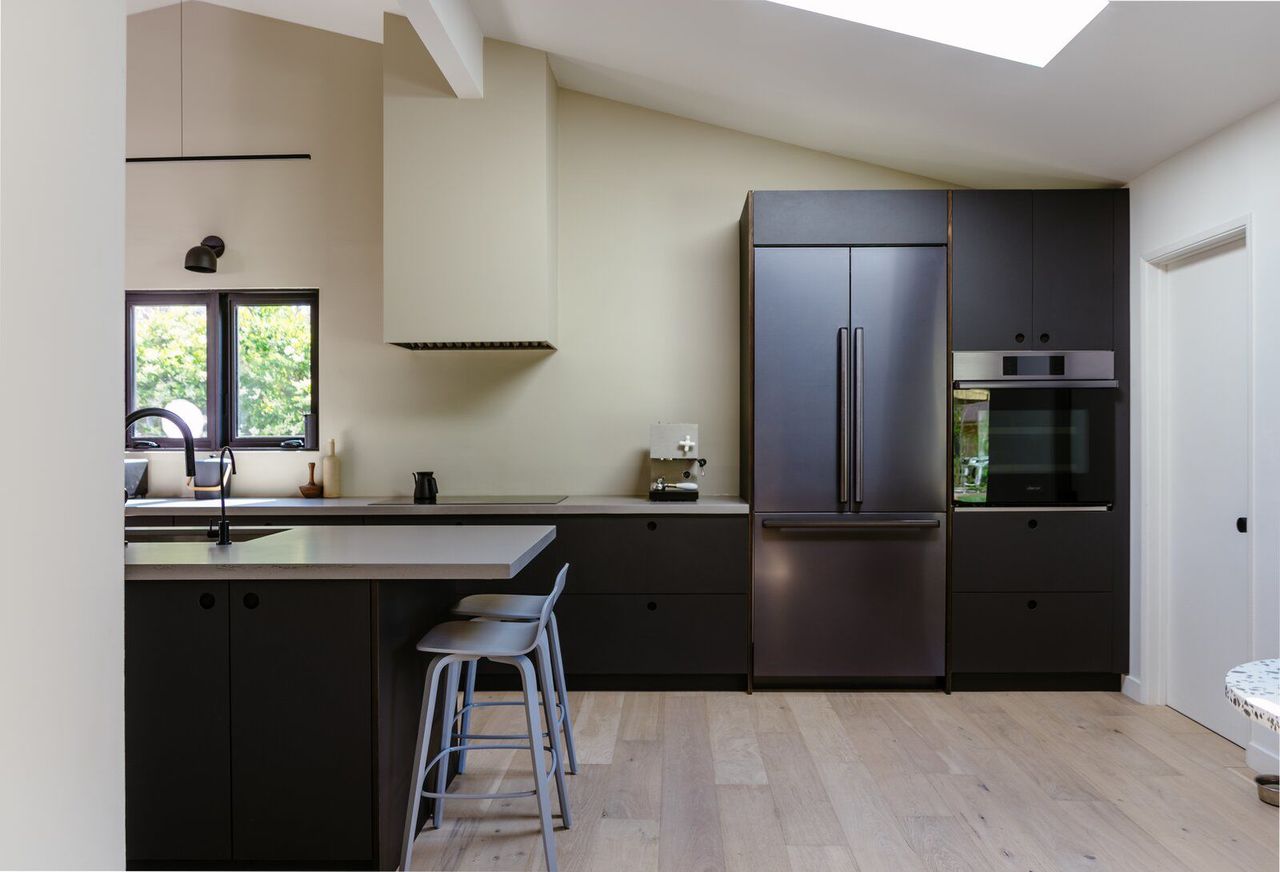 The couple sought to "create a place that felt very serene and calming," says Whitney, explaining why they named their home the Zen Den. "We’ve always been inspired by the sleek minimalism of Scandinavian and Japanese designs," she adds, noting they also integrated Mexican influences into the space as a way to celebrate Carlos’s heritage. Carlos says, "Overall, we wanted the house to be soothing and easy on the eye."

The remodel involved removing a wall in the kitchen to open up the main living spaces. "I typically prefer having individual rooms for certain purposes, but the open plan works well in a midcentury home," says Whitney.

A key ingredient the couple relied on for achieving maximum zen was natural light. "From the start, we knew that by installing new doors and windows, the entire aesthetic of the home would change-and that’s exactly what happened," says Whitney. After researching various companies, the couple decided that Western Window Systems was the perfect fit. "We wanted windows and doors that looked streamlined and modern, but also met all standards of sustainability," explains Carlos. 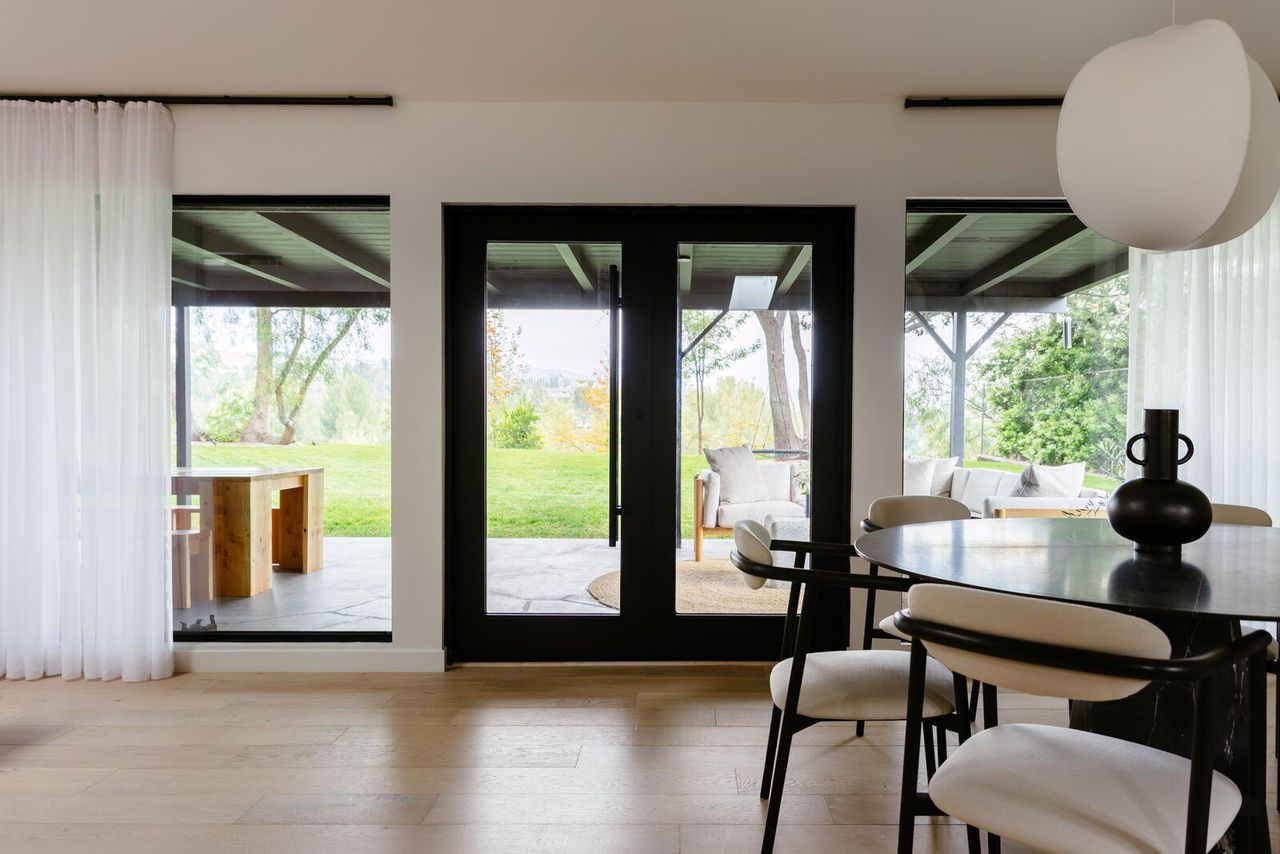 The dining area features floor-to-ceiling picture windows and black-framed glass doors that open onto the back patio. 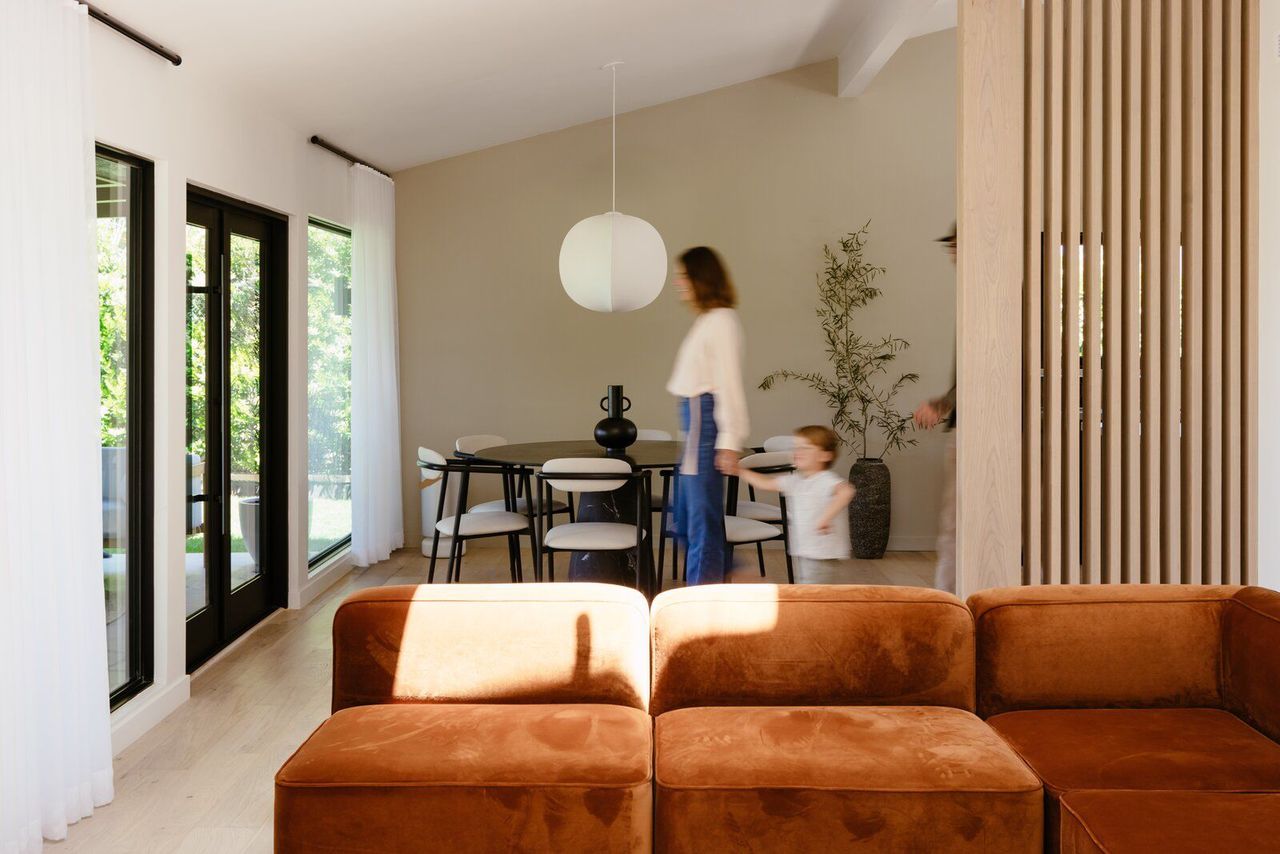 The addition of skylights throughout the home brings in natural light, which bounces off clean white walls.

"Working with Western Window Systems was a great experience," continues Carlos. "From the moment we started the conversation to installation, the company was always supportive and responsive. We gave them rough sketches of what we were looking for, and they basically took care of everything." 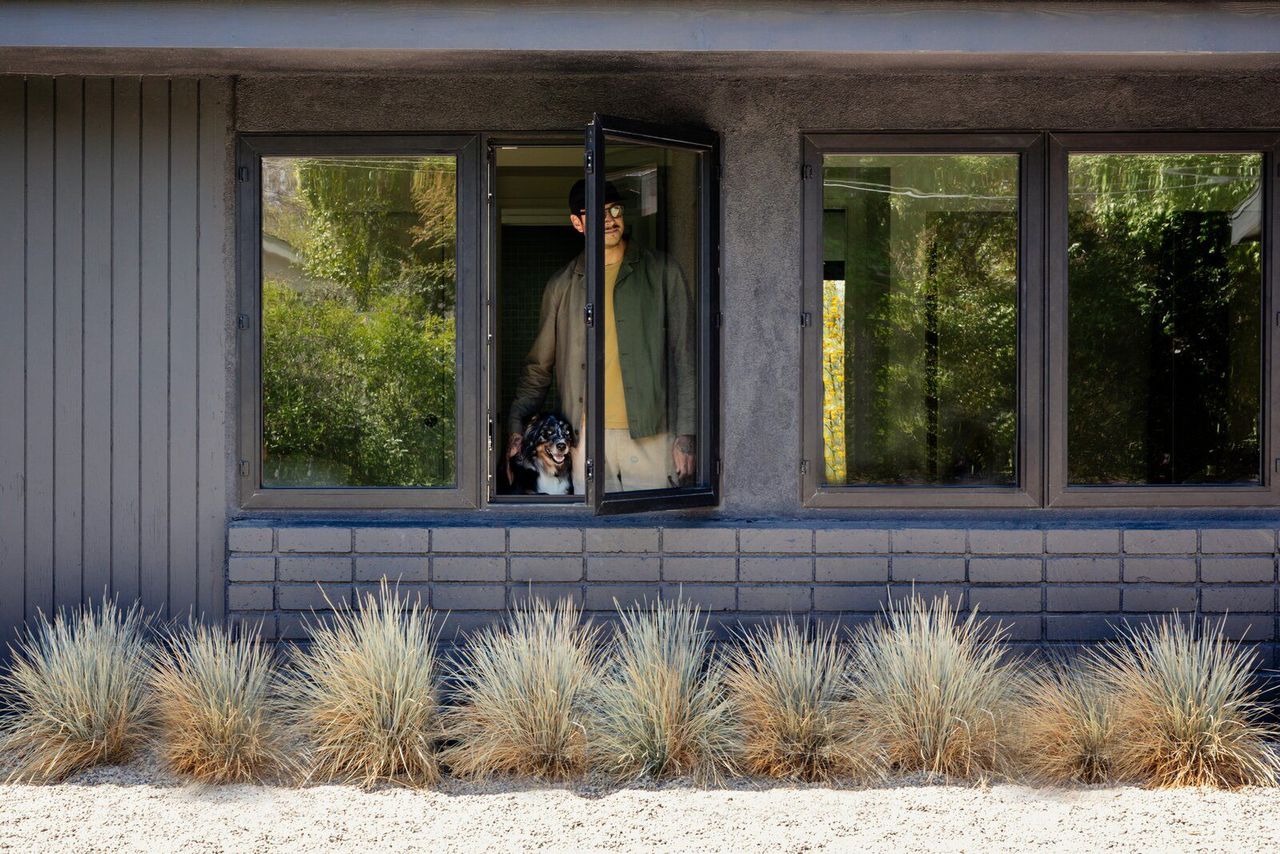 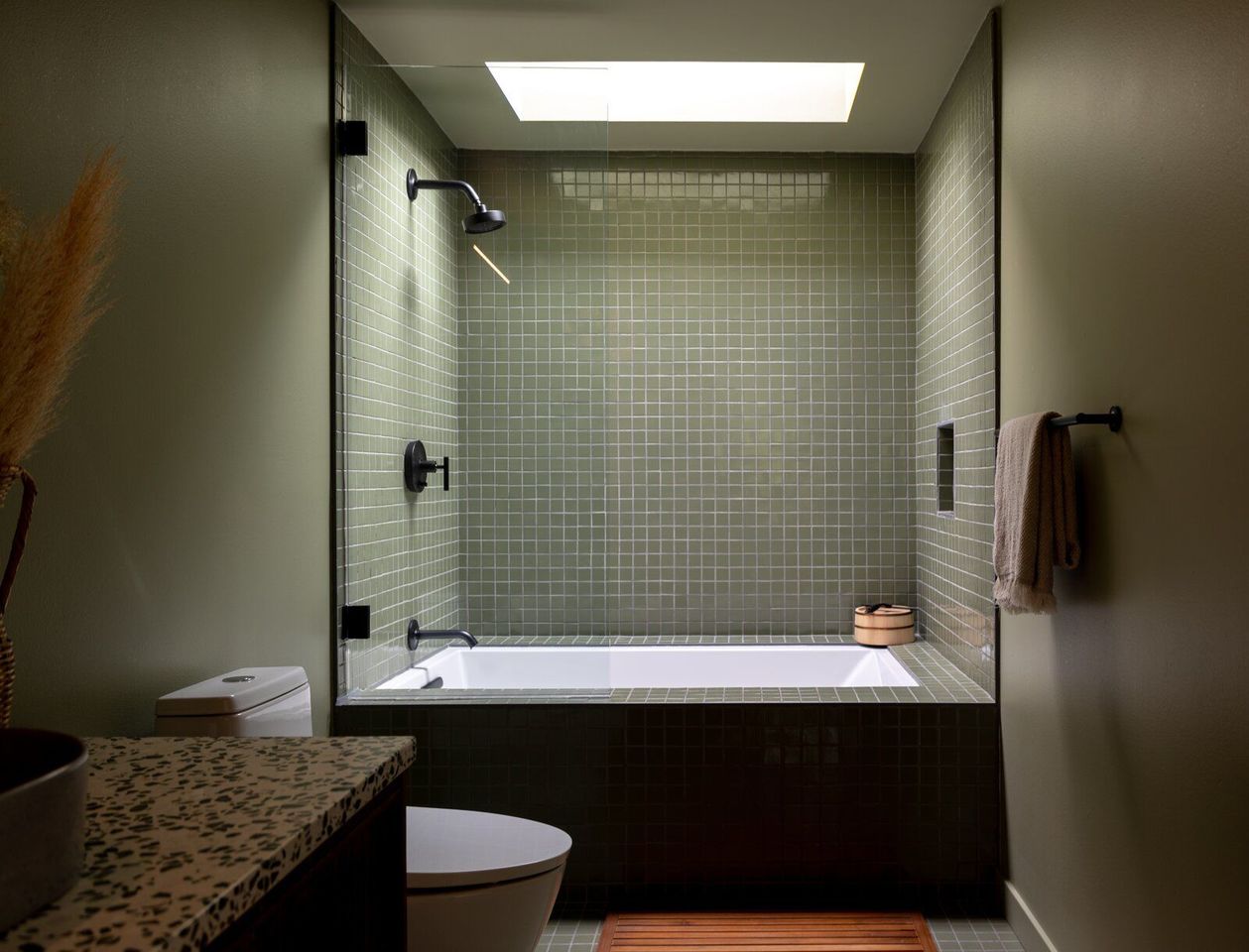 A well-positioned skylight and a monochromatic color scheme in shades of warm gray combine to create a sense of tranquility in the bath.

Throughout the residence, the couple added skylights, picture windows, and sliding doors to draw in light while framing views of the surrounding canyons. "Outdoor living was a big reason we purchased this house," says Whitney, noting the lush lawn that hugs the property. "Installing the swing-out doors in the dining room was a game changer for entertaining." 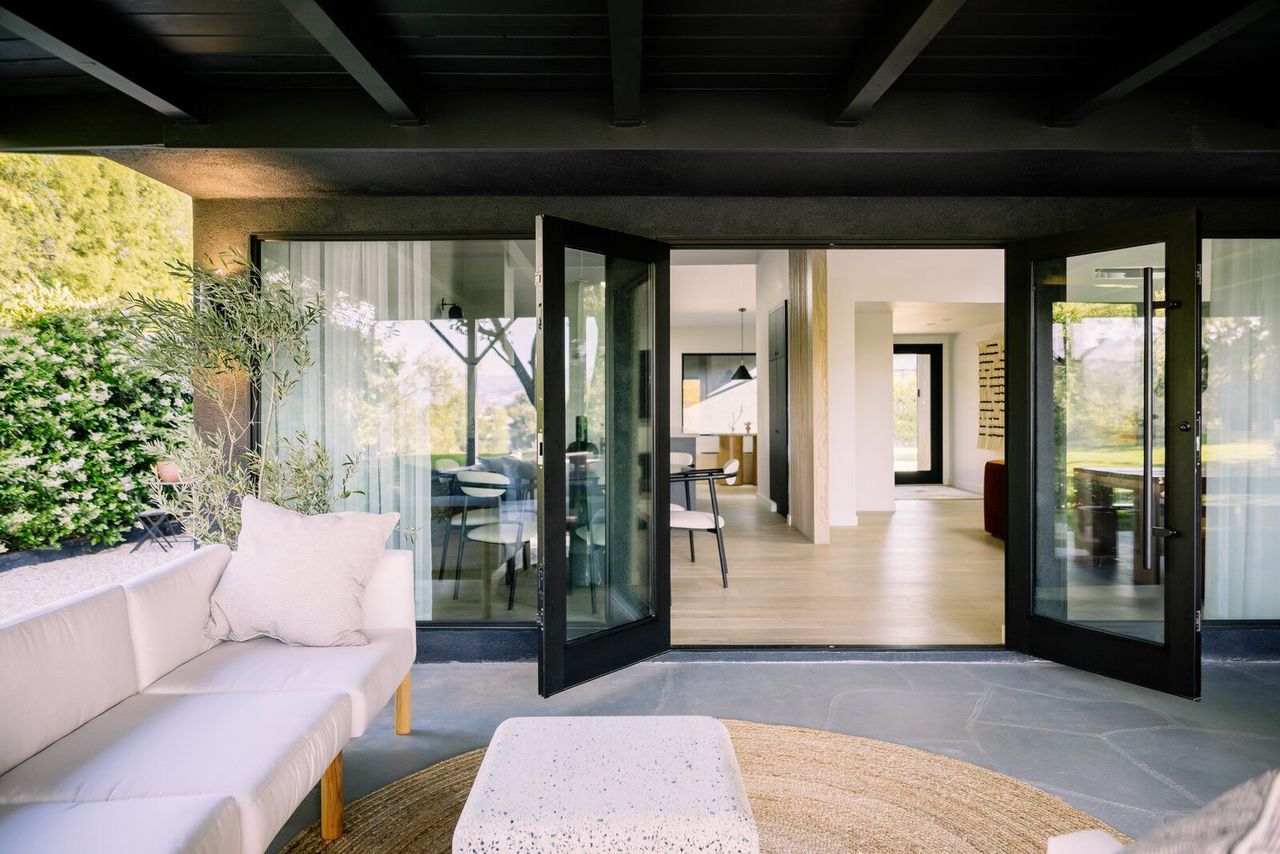 Wood flooring transitions to stone in the couple’s patio, which connects to the dining area for easy entertaining. 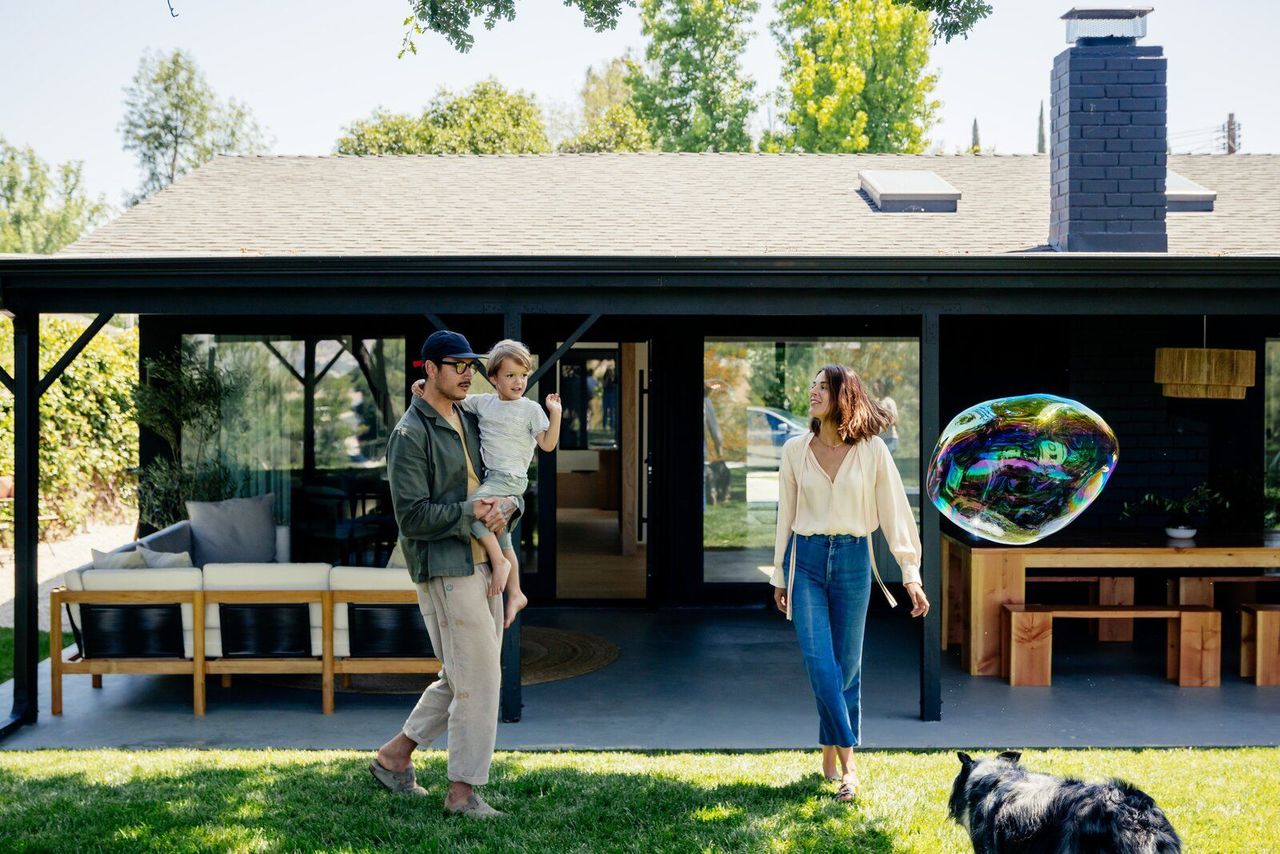 The couple’s back patio and yard are seamless extensions of their indoor living spaces thanks to thoughtful fenestration.

"Now that the renovation is complete, we don’t want to leave home," says Whitney. "Being a bit outside of the city, it feels like a vacation. To be able to lay in the grass in peace and quiet while having your child and dog play and run around-it’s truly a gift."