With an arch motif, cozy interiors, and parapets resembling perfectly coiffed egg whites, the ADU by designer Ben Warwas and architect Chris Skeens turns an Echo Park garden into a whimsical retreat for a writer.

When screenwriter and author Jane Rosenthal acquired her circa-1905 house in the Echo Park neighborhood of Los Angeles, it came with a backyard created by a Hollywood set designer that included a simple outbuilding set into a fanciful garden. Jane immediately transformed the structure into a writing studio, but it wasn’t long before the problems began. "Between drainage issues and a resident skunk, we simply had to replace it," she says. Designer Ben Warwas chats with his family on the roof deck. The decking is Mangaris hardwood.

After an initial meeting with an architecture firm failed to produce a solution-"our visions didn’t mesh," Jane says-an artist friend suggested she look up Chris Skeens, who had recently cofounded Byben and Skeens with Ben Warwas. A former architect with Frank Gehry, Skeens worked with Warwas to create a replacement studio that would strike a balance between the necessities of the structure and what Jane refers to as the "kind of Shakespearean magic" of the existing site. The terraces include a new amphitheater-like space for Jane’s work, inspired by an Instagram picture of her rehearsing a piece with actor friends; a fragment of the original garden design is incorporated into the new construction.

"She was asking for a hut," Skeens says. "So Ben and I came over with a bunch of books on African and Indonesian traditional architecture to show her what was possible." For Jane, the presence of the books was a deciding factor. "As a writer, the tactility of books is very important to me-I knew then the relationship was going to be right," she explains.

Not that there weren’t challenges aplenty: The foundations required caissons, and the closed-off site meant that the backyard property had to be accessed through a sympathetic neighbor’s yard. But the most mercurial aspect of the process was the design itself, which continued to evolve as the architects and client explored finishes and uses that drew inspiration spanning from Luis Barragan’s interiors to the Greek home of Jacqueline Kennedy Onassis. 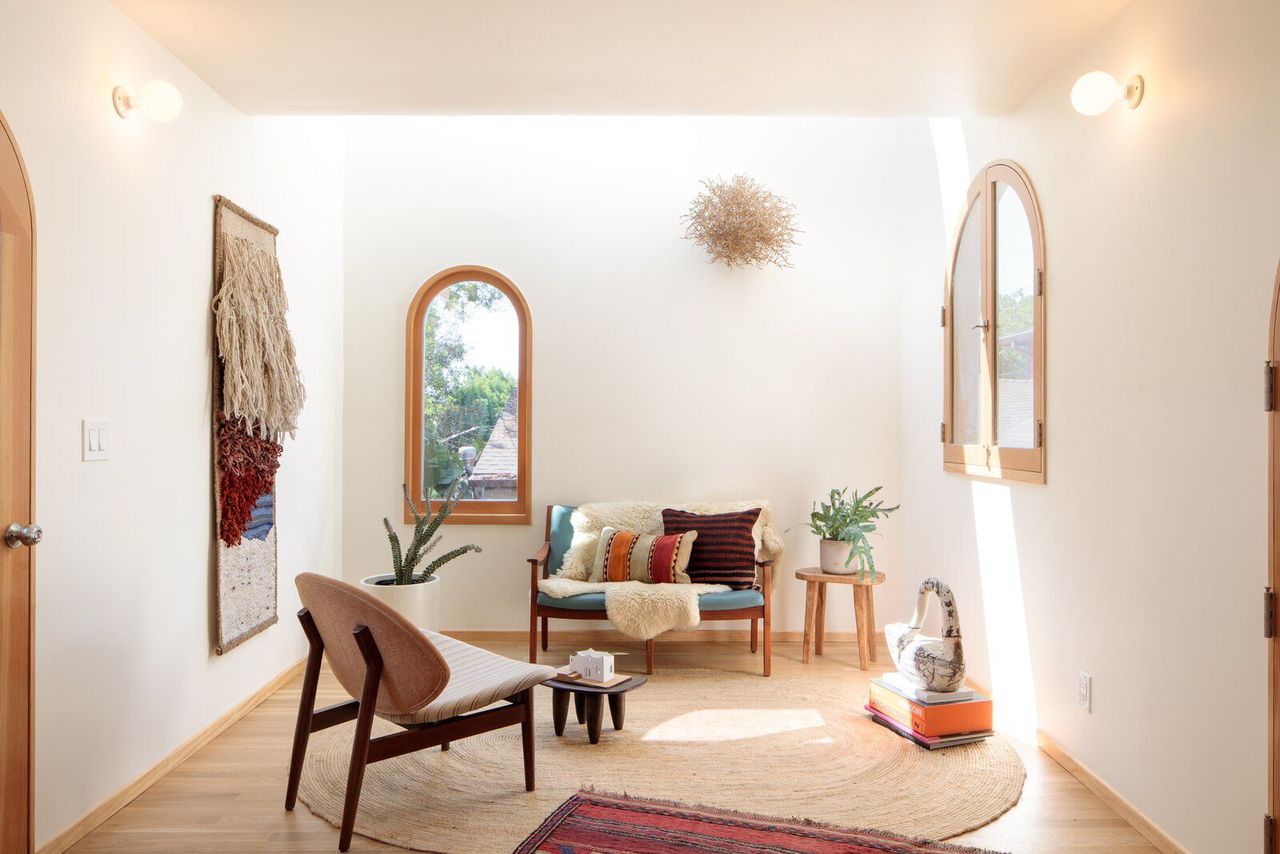 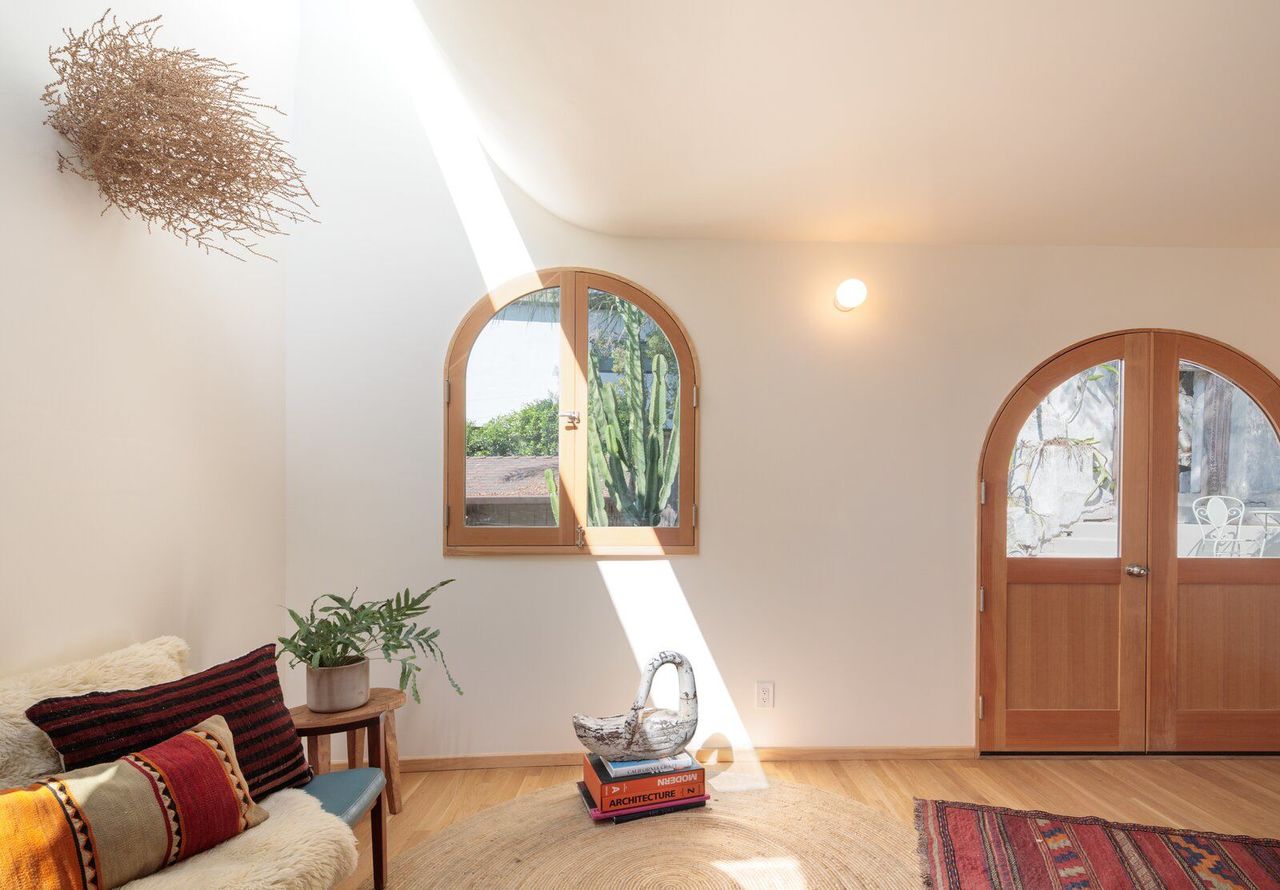 A shaft of light illuminates the interior. "A friend of mine compared the visual elements to Jodorowsky," Jane said. "Very cinematic."

"Jane was planning for smooth stucco, but I was pushing for a stucco with a heavy dash, something that would show a lot of relief and gradient of color," Warwas says. "We met somewhere in the middle."

"When we did the scratch coat of the stucco, she fell in love with it," Skeens adds. "Because the form of the building itself has such a crispness to it, the texture gives it a materiality that grounds it. That was really important for her and for us too." 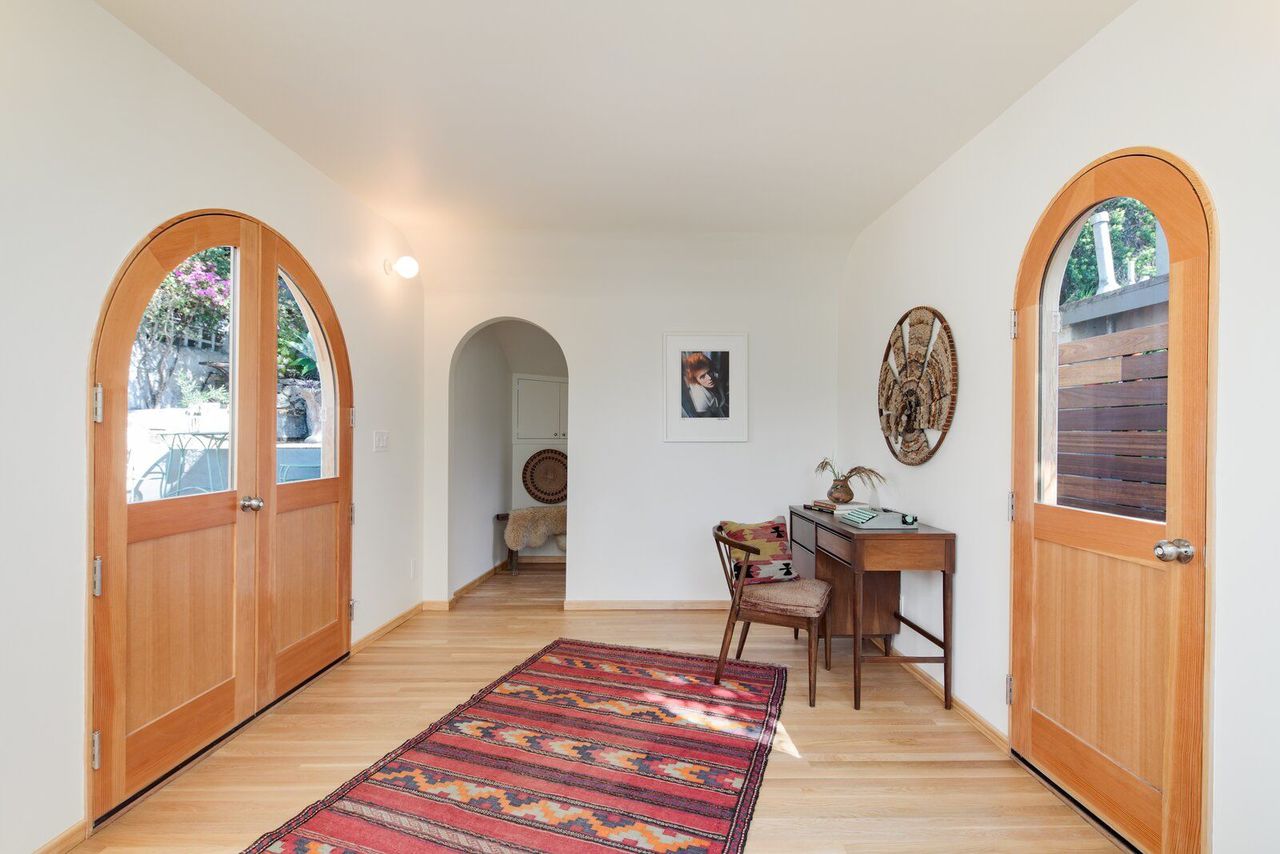 The rounded doors by JT Windows and supplied by Taylor Brothers replaced an original plan for all-glass doors. "The result is much more domestic," Warwas notes.

"The biggest surprise for me is just how light and airy the finished building is," Jane says. "I had in mind something sort of cocoon-like and sequestering, and this has a spiritual openness that really grew out of the process." Skeens agrees, remembering that some of the contractors "thought [they] were working on a chapel."

This is due in part to the gracefully proportioned interior, where the ceiling curves upward at the east wall into a skylight well that Warwas cites as a key component: "We wanted to make the skylight completely part of the building as opposed to just punching a hole in the roof." A series of retaining walls and deck spaces were designed by the architects to surround the studio. A property wall was constructed out of concrete with a new fence and lower deck made of Mangaris hardwood. 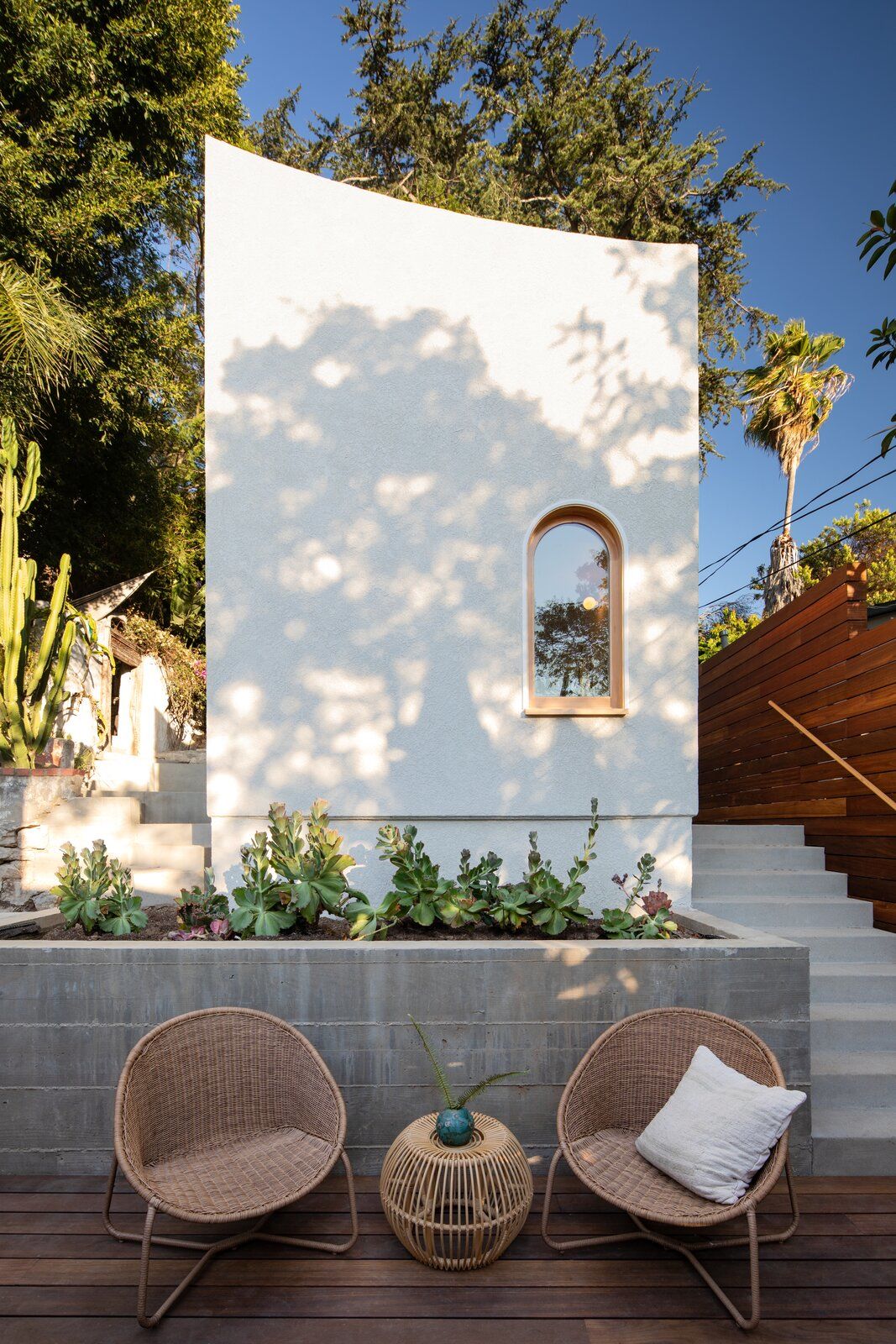 The house is accessed from both the north and south facades, and is surrounded by staircases.

The roof itself became a deck accessed by an exterior staircase. "We realized we had a roof deck opportunity due to the slope of the site," Warwas says. "It just made sense." Jane agrees: "It ties into everything else and is a beautiful feature-the view of Echo Park Lake, the space." "The parapet makes the building look quite a bit bigger than it is and it creates an idea of mystery—or discovery," says Warwas.

The deck is framed by a fantastic parapet of scalloped "waves" that give the house its name, Stiff Peaks. "It’s a confectionary term, whipping egg whites to make an airy meringue," Skeens says, noting that the result is as light and deceptively simple in appearance as the desserts themselves. Warwas points out that the forms also serve as a balustrade for the roof deck staircase. "They were designed to be oceanic," he says. "They don’t line up—they aren’t symmetrical." Small windows puncture the parapet, including an upside-down arch that Warwas calls "a joke we wanted to make obvious without being labored-something that anyone could immediately read as humor." "This project is the beginning of ‘Fluff Menage’ architecture," quips Warwas.

Jane appreciates the punchline: "I loved working with them [and] melding the whimsical and the practical." Skeens adds, "There was a lot of laughter. We had a lot of fun."