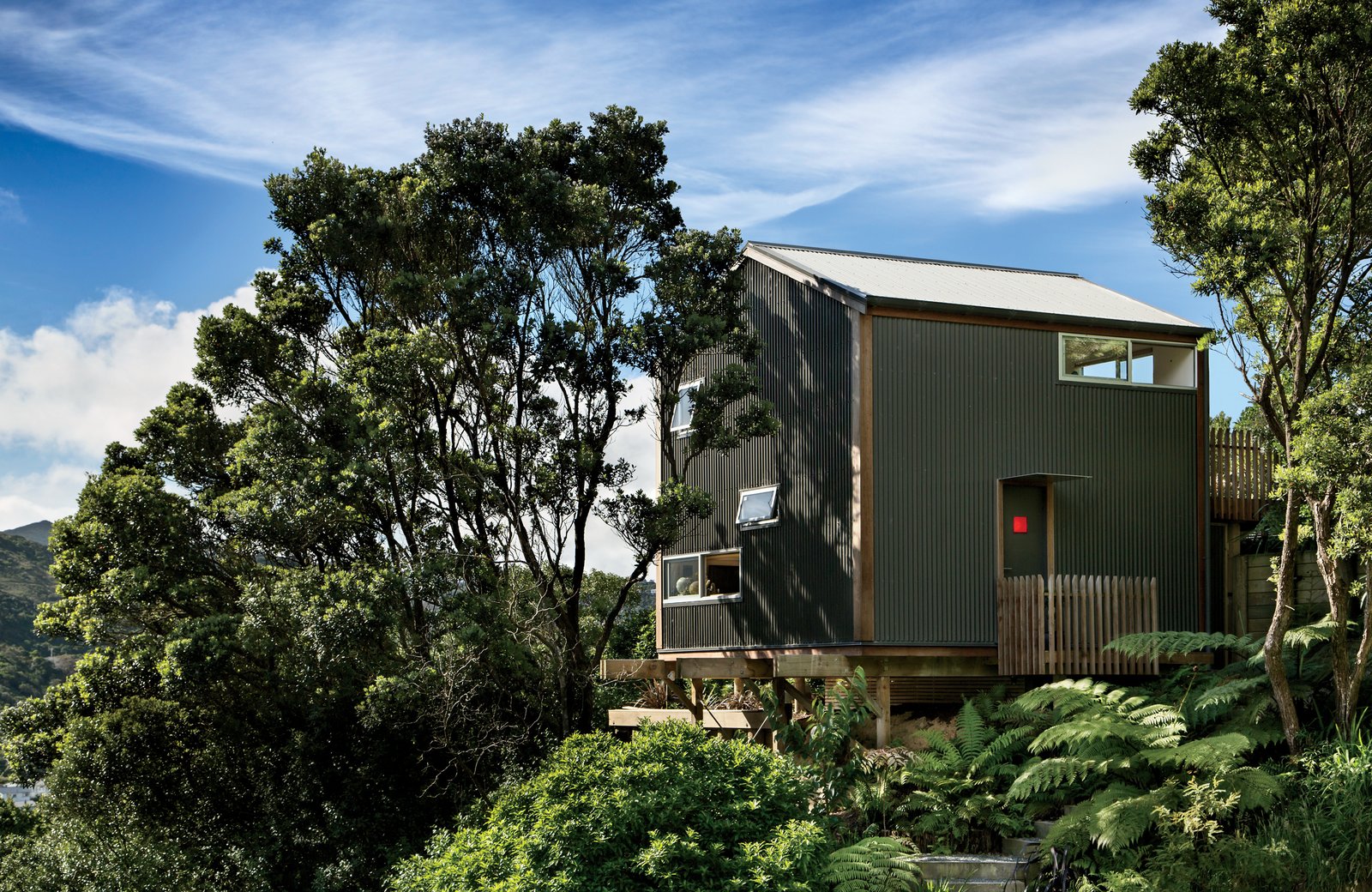 A Home's High Ceilings Are Responsible for Some Impressive Views

An architect with a taste for unconventional living spaces creates a small house at lofty heights with a starring view. 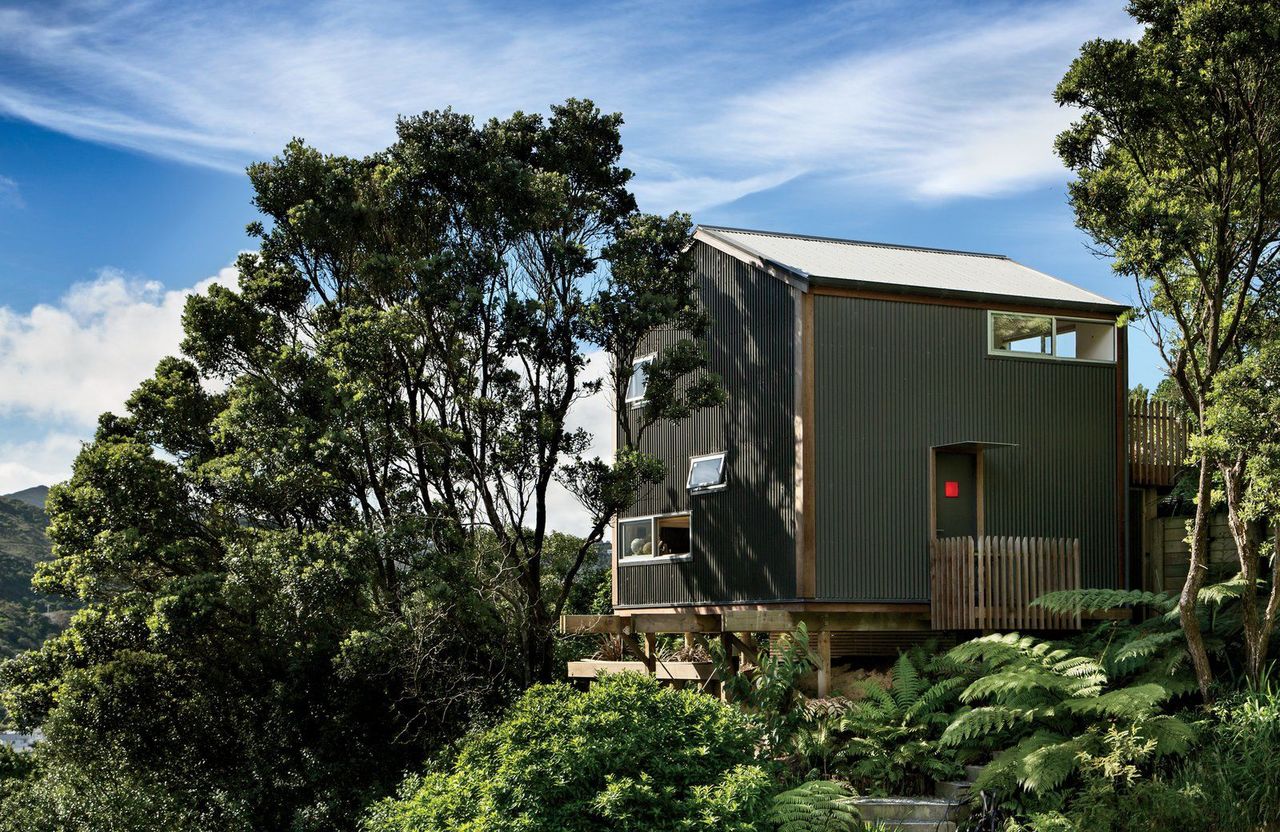 When he was a student and a habitué of Wellington’s nightlife scene, Simpson lived in a variety of eccentric spaces, including an active warehouse in which he contrived a home by bending walls of corrugated cardboard into complex, self-supporting shapes.

When his fiancée, Krysty Peebles, entered the picture, the couple tried living in a traditional home but quickly labeled the attempt a failed experiment. "We found standard houses strangely unsatisfying," Simpson says. "It made me realize a three-bedroom house with a garden doesn’t suit everyone. I had shaped my earlier dwellings rather than being pigeonholed into a specific way of living." 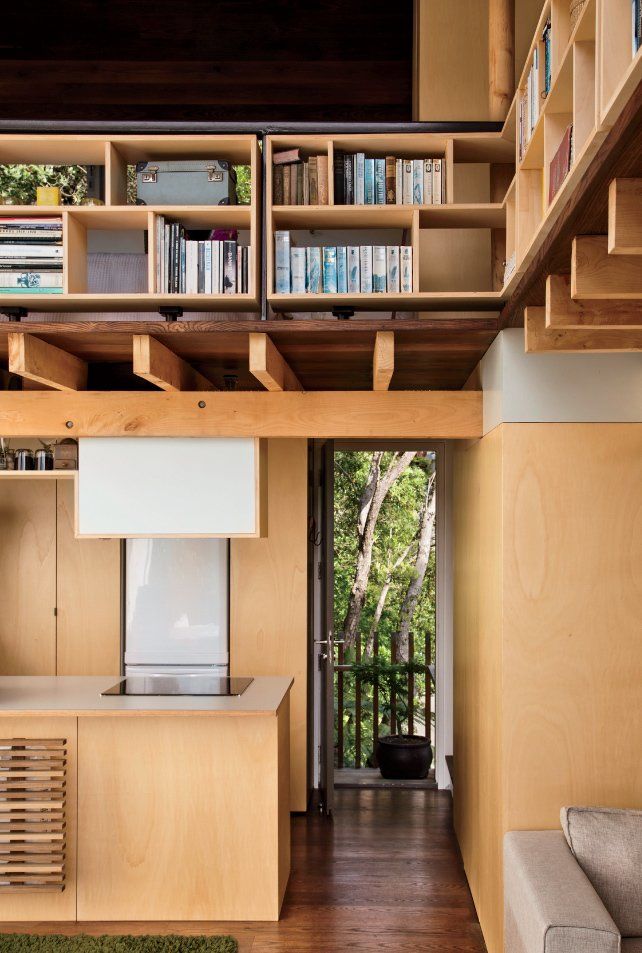 So they moved into a tiny freestanding apartment, a former architecture office partially constructed from repurposed school windows that rattled in Wellington’s notorious winds. They later upgraded to another converted office, this time inside a rambling contemporary residence on the city’s waterfront. "These spaces were uplifting and exciting to live in," Simpson says. "The idea of returning to a more conventional mode of living was becoming less and less attractive." 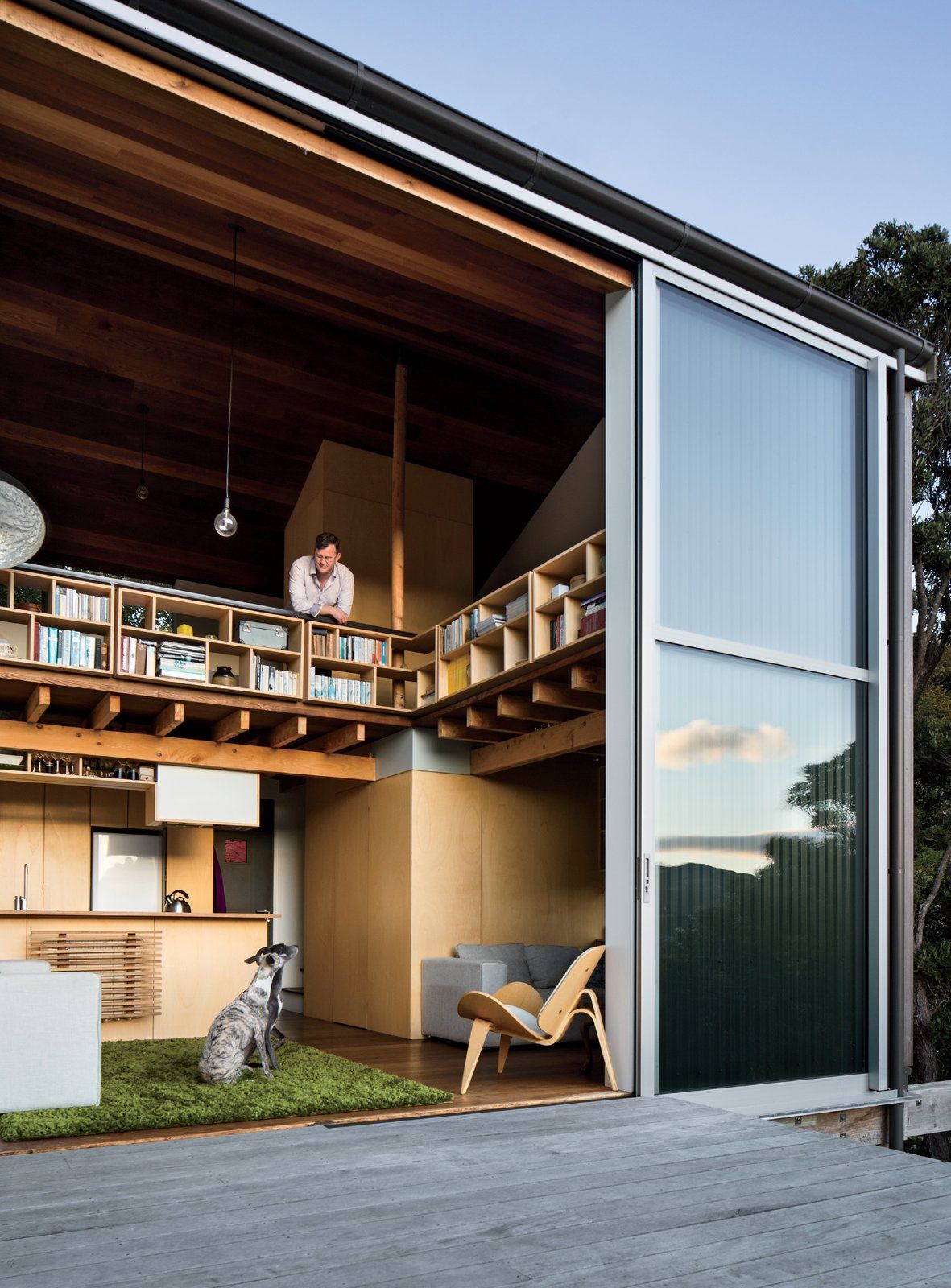 Open enclosures and connections to adjacent living spaces keep the home inviting and airy rather than densely packed-a key feature for an owner of two dogs: Ben, a whippet, and Flynn, an Irish gypsy dog.

When the couple finally decided to design and build their first real home, it was to these unorthodox spaces that they turned for inspiration. They purchased an untraditional plot-a small and sharply sloping piece of land with a majestic, unimpeded view across Island Bay, a coastal suburb just south of Wellington-and Simpson sketched out plans for a 538-square-foot house that would accommodate a more experimental way of living. 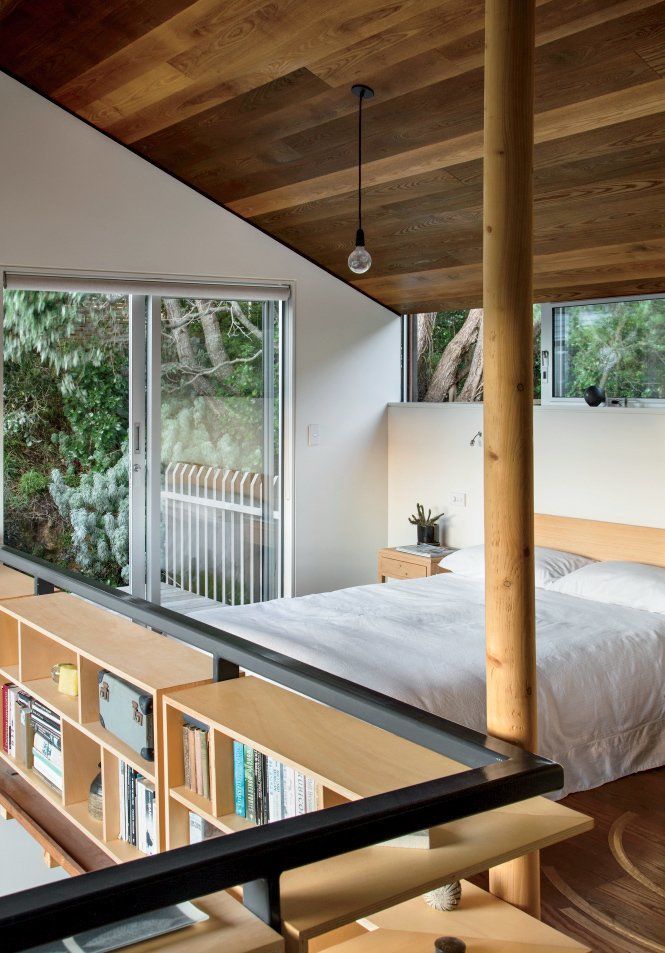 "Being your own client is very difficult, and different from the standard process-you get to be more experimental."-Andrew Simpson, architect and resident

A major influence on this design was Simpson’s experience as an intern in Kyoto, Japan. It was there that he became interested in the work of Makoto Masuzawa, an architect who, in 1952, designed the Minimum House, an economical family home based on a rigorous set of principles, including a strict envelope, a gabled roof, and one "open" glass wall. "Masuzawa’s process resonated with me, as did the economic reasons he developed it," Simpson says. "Of course, today, you’ve also got environmental reasons to build small." 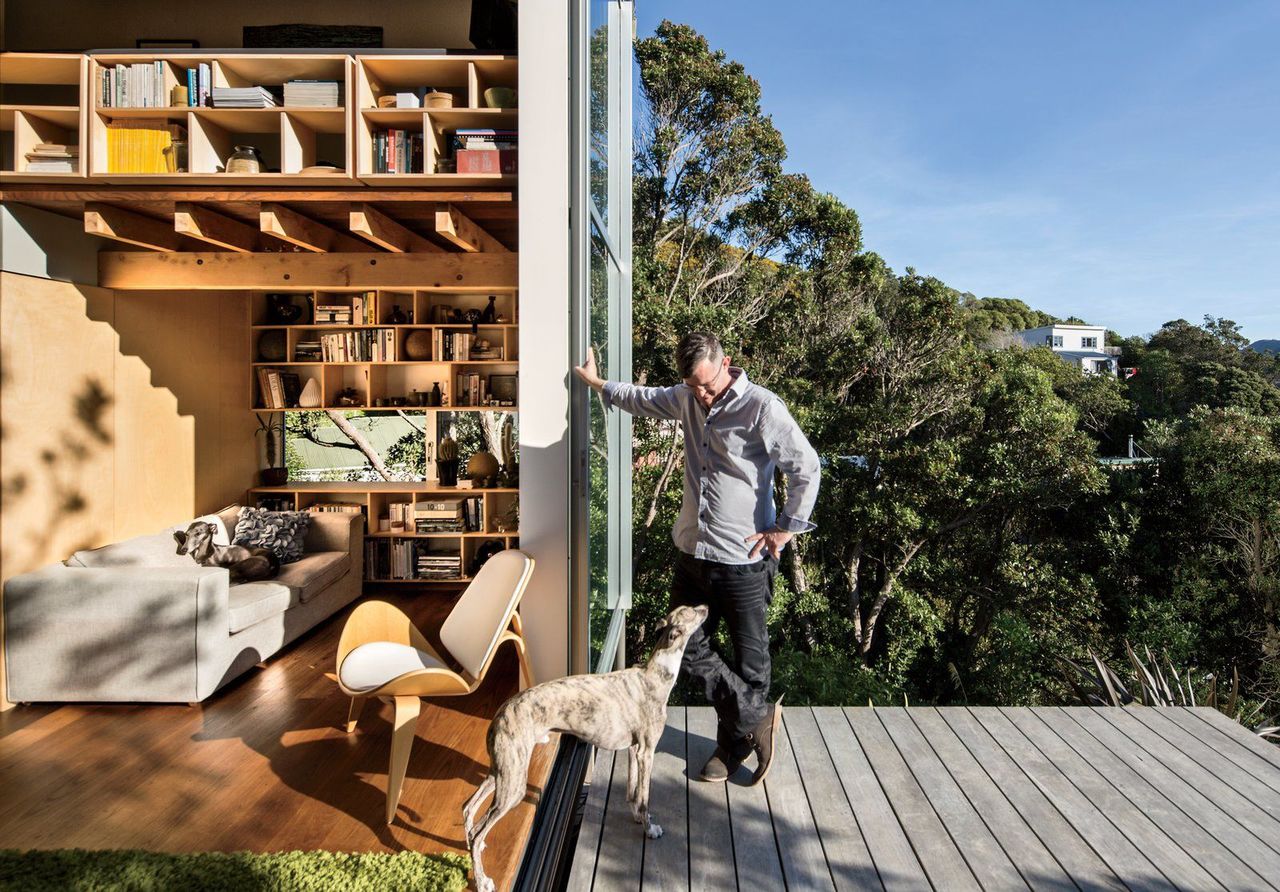 Oriented to absorb the afternoon sun, floor-to-ceiling doors comprise two-thirds of the home’s west-facing walls, which open to an elevated deck overlooking Island Bay. Combined with extra-thick building insulation, this passive element provides sufficient heating for the home, even during winter months-a true feat given the region’s cold seasonal winds.

Seen from the outside, Simpson and Peebles’s house is unassuming, its inexpensive corrugated-metal cladding echoing the tin shed, a vernacular style of the region. "It’s a box, basically," Simpson says.

"You enter through a modest door at the back, and the whole house opens toward the west," he says. "It’s a surprise-a low entry that opens out, like Frank Lloyd Wright did at Fallingwater. From that point of view, it is utilitarian, but there is also whimsy." 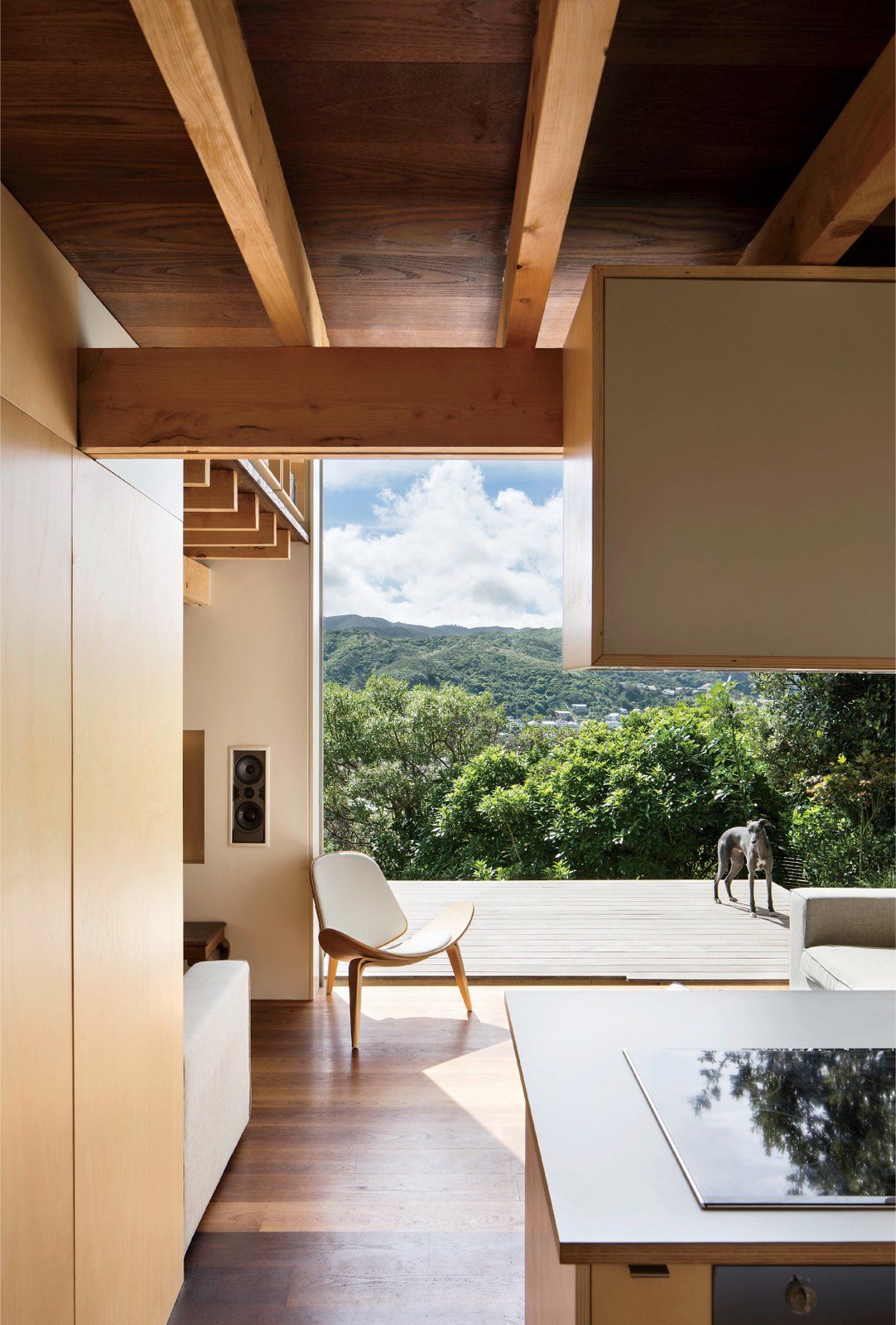 The home also extends into outdoor panoramas, even-and especially-from the ground floor, where a westward-facing deck cantilevers out into the lush landscape.

Much of the structure’s true beauty lies behind its unremarkable outer skin. As do most Masuzawa houses, the couple’s home contains a double-height space that was left undivided to allow the interior areas to connect and "borrow" space from one an-other. For example, Simpson says, the mezzanine bedroom in their house would feel cramped if it were fully enclosed, but opening it to the living area below makes it seem much larger. The same goes for the kitchen and the study, where the architect now runs his independent practice, WireDog Architecture. 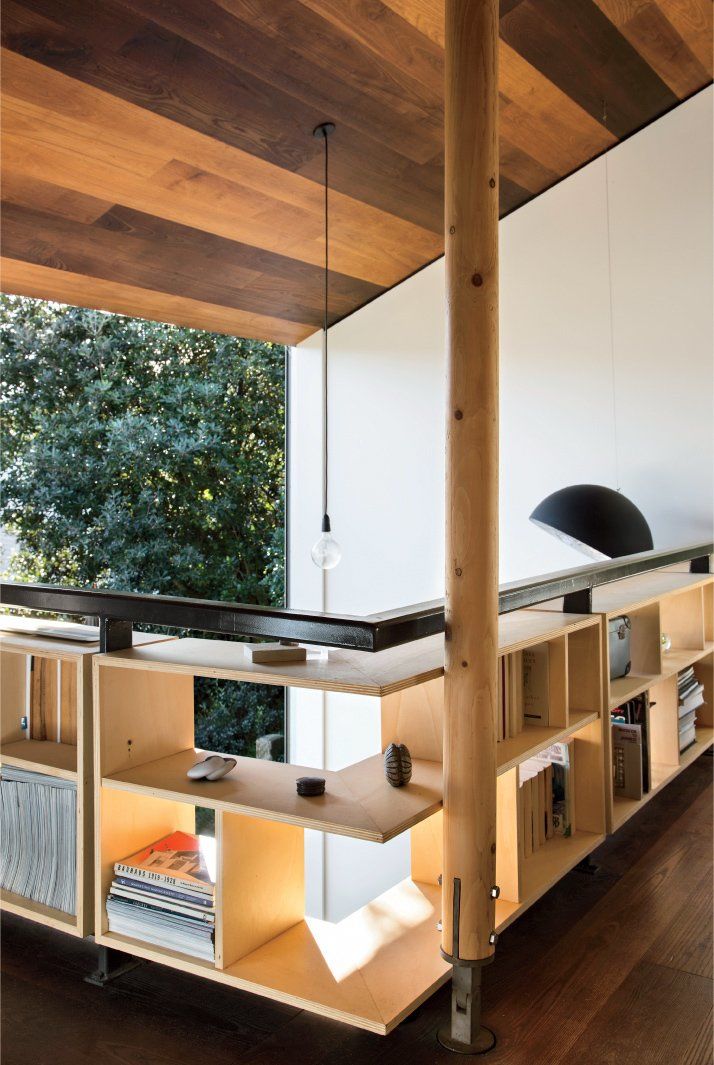 Simpson runs his practice, WireDog Architecture, from his home study, where custom bookshelves line the perimeter of the mezzanine for a storage solution that doubles as railing.

Two-thirds of the west-facing wall comprises huge floor-to-ceiling glass doors that slide completely away, opening the house to that stunning view. The door bottoms are lower than the threshold, so the joinery frame is hidden when the doors are closed. Elevated among the trees, the house gives the sense of being perched in the leafy canopy.

Oriented to capture the afternoon sun in winter, the glass wall allows for maximum heat gain. This, combined with the tight envelope of the building’s insulated, five-and-a-half-inch-thick walls (the local standard is three and a half inches), means that the living space doesn’t need heating in winter-an impressive feat for a house on a coastal hill, where the weather is often blustery and cold. 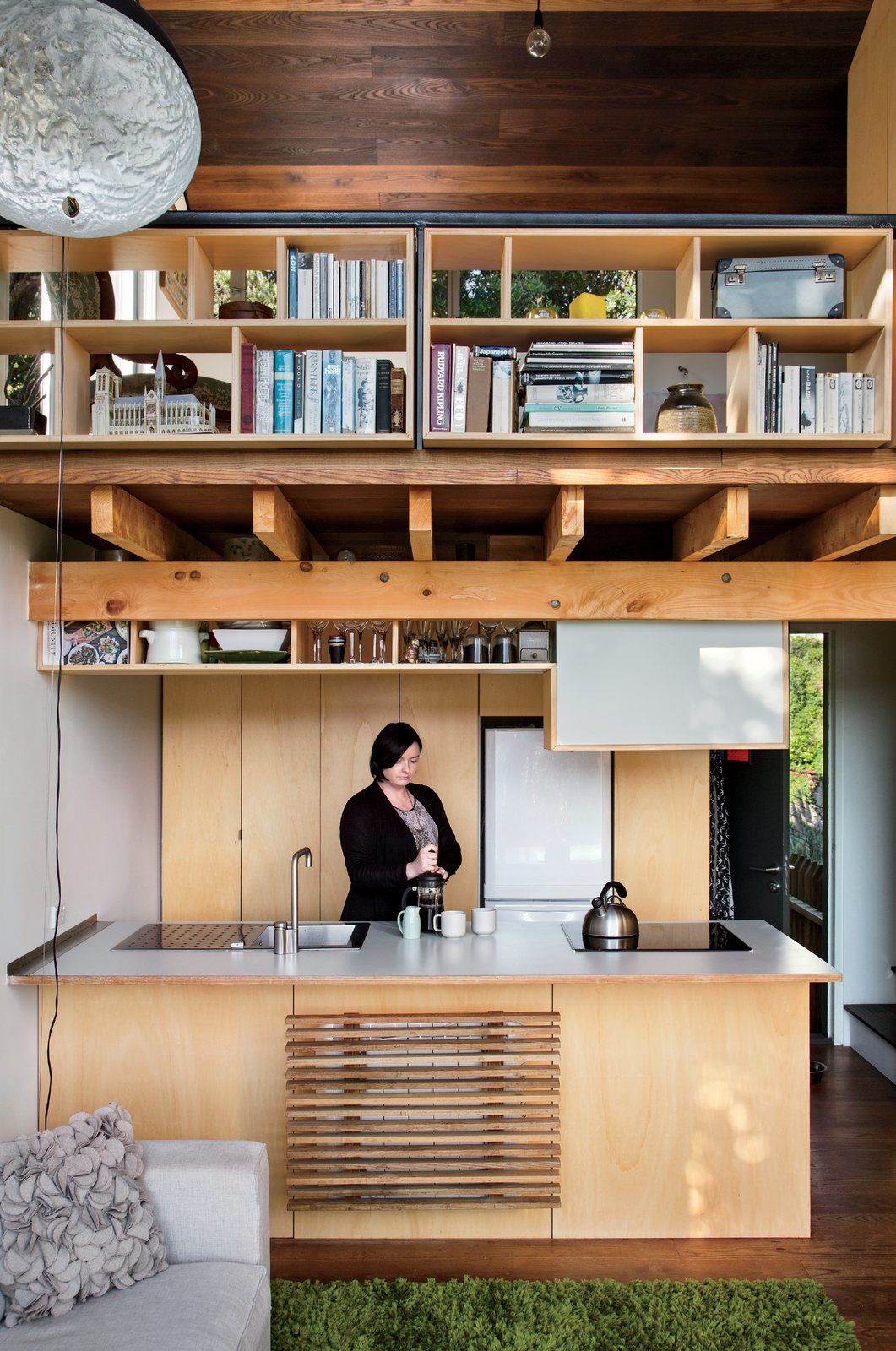 After the initial construction phase, the couple moved into the empty shell of the house and spent their weekends using a circular saw to craft the internal joinery, space-saving shelving, and a bookcase that doubles as the mezzanine balustrade. Materials like Italian poplar and Lawson cypress work together to give the space a warm, inviting feel.

Simpson’s favorite element, however, is the white ash on the floors and ceilings, which was oiled once in place. The ash was torrefied, a process in which wood is left in a kiln until it begins to caramelize, giving it a rich chocolate tone. Much of the relatively tiny budget of under $150,000 was devoted to a few luxurious internal materials and fittings, with the limited scale of the house putting this small number of pricey items within the homeowners’ reach. 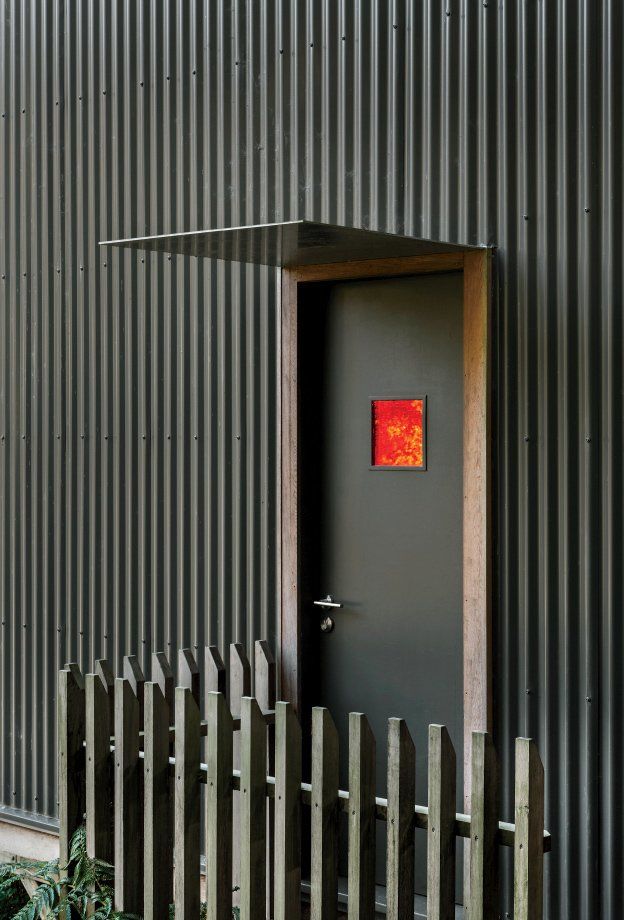 "I suppose you could consider me part of a subculture who lived in various inner-city spaces," says Simpson, whose previous homes include ad hoc spaces in industrial warehouses, floors of office buildings, and units above shops and bars. In designing his Island Bay home completely from scratch, he retained his experimental spirit: "We wanted a house that responded to our wider social, environmental, and economic concerns rather than something that blindly followed convention," he says. Unassuming in sight, the home’s corrugated-metal cladding (above) recalls the tin shed, a vernacular housing type in the region.

In a country where low population density has encouraged architect-designed homes to become increasingly expansive and unaffordable, Simpson’s house is a bold statement-and potentially a challenge to the status quo.

The home reflects the couple’s belief that a small footprint doesn’t necessarily equate with compromise and that it supports a better model of living, one with the excess whittled away. "Because we had lived in experimental houses before, we were able to take that route-which is a privilege," Simpson says. "This house seems to have hit a nerve. Technically, it’s small, but it feels generous." 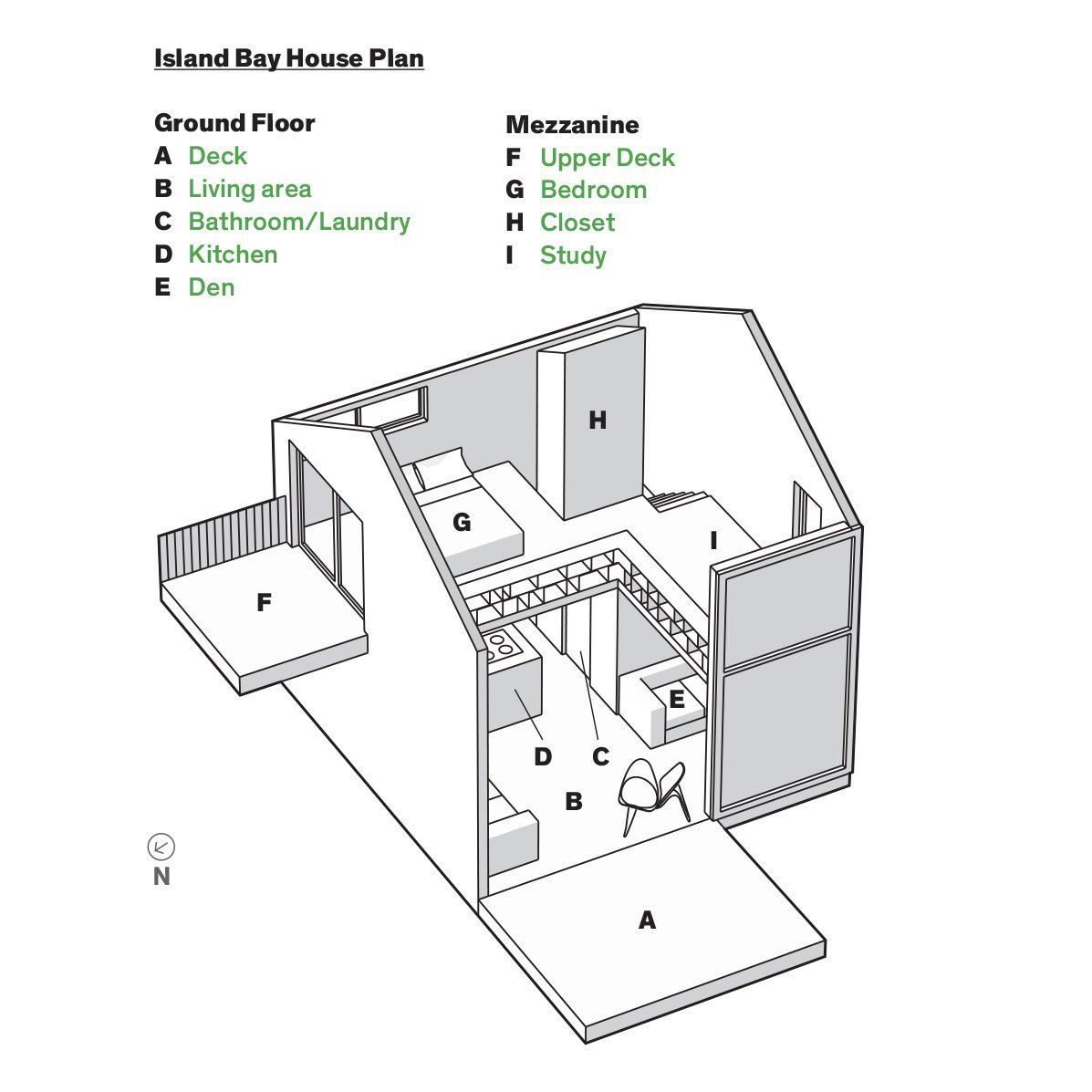 "There’s that iteration you go through, trying to both maximize space and the feeling of space,so that it doesn’t feel cramped."-Andrew Simpson