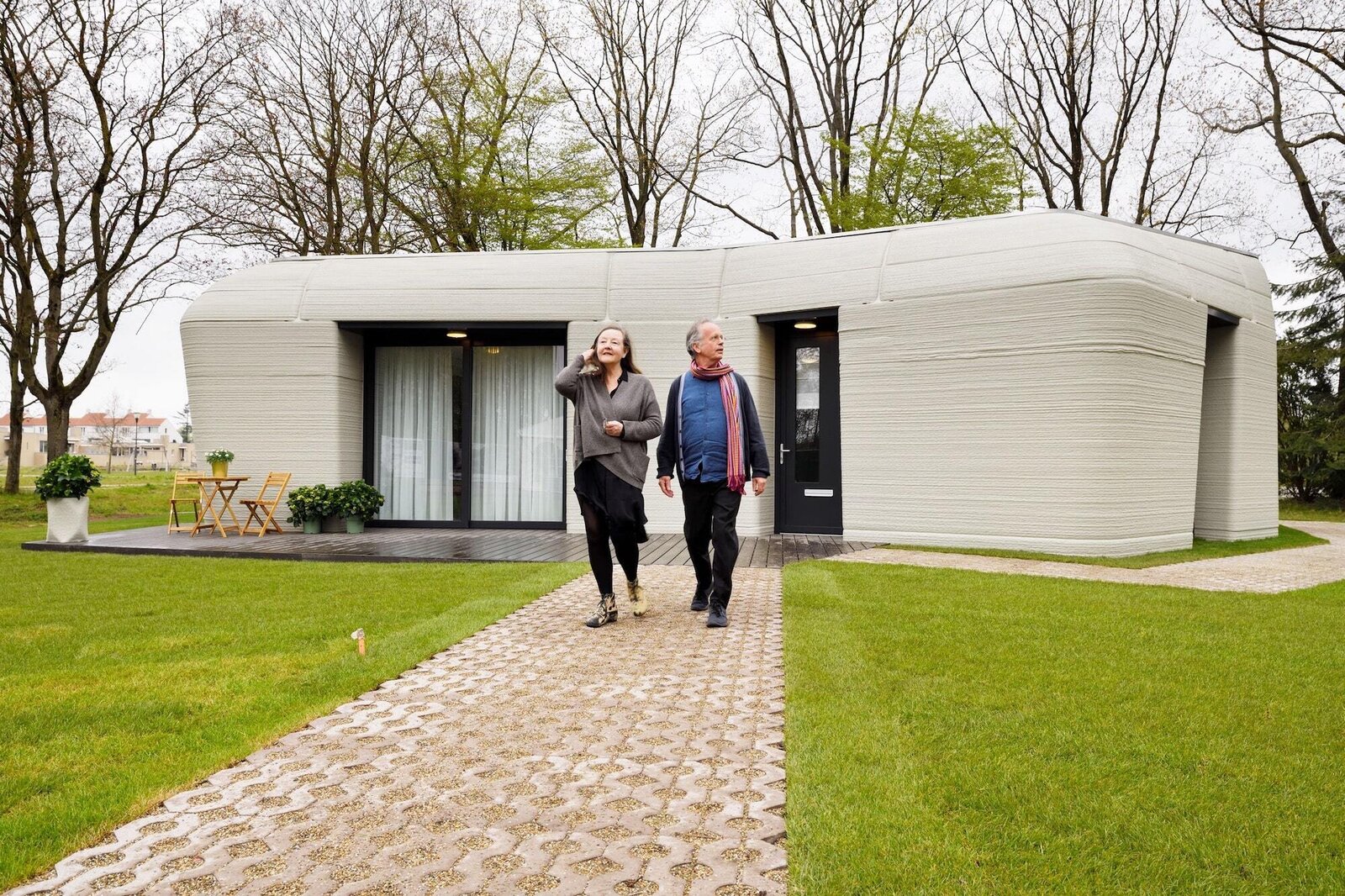 The Flintstones-style home in Eindhoven is the first legally habitable house in Europe with 3D-printed load-bearing walls.

3D-printed homes have made headlines in recent years, but most have been more conceptual than practical. Now a boulder-shaped home in the Eindhoven suburb of Bosrijk has become the first legally habitable property with 3D-printed load-bearing walls-and on August 1, a retired Dutch couple, Elize Lutz and Harrie Dekkers, will officially move in. "My first feeling when I saw the picture [of the house] was like a child in wonder," recalls Elize. "It’s a fairytale house-a gigantic boulder!" Dutch couple Elize Lutz, 70, and Harrie Dekkers, 67, are the tenants of the 3D-printed home near Eindhoven’s Beatrix canal. They picked up their digital access key on April 30, and they will officially move in on August 1. The retired shopkeepers from Amsterdam applied to live in the property for six months following a call for applicants, and they are paying €800 a month-about half the market value. 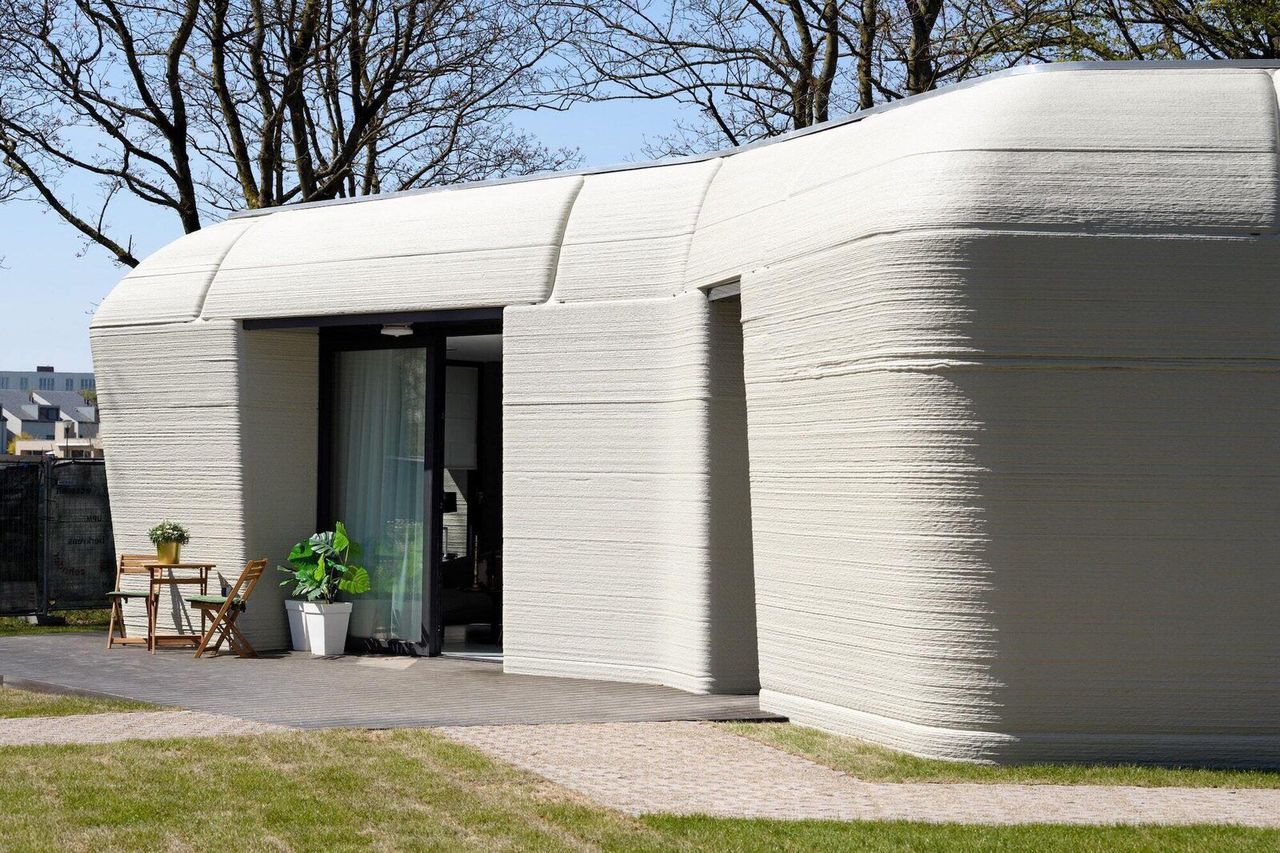 Project Milestone is made up of participants from Eindhoven University of Technology, mortar and concrete company Saint-Gobain Weber Beamix, engineering firm Witteveen+Bos, and construction company Van Wijnen. The land was made available by the local authority, and the homes will be bought by residential investor Vesteda and rented out to test their viability.

The two-bedroom bungalow is part of Project Milestone, which aims to create the world’s first 3D-printed homes that meet statutory building requirements and are fit for habitation. During a six-month rental period, Elize and Harrie will keep track of their experience in the home to test whether this method of building is viable for the future.

"It will be a pleasure for me to share our living experience," says Elize. "I am a diarist, and I enjoy describing the daily experience." 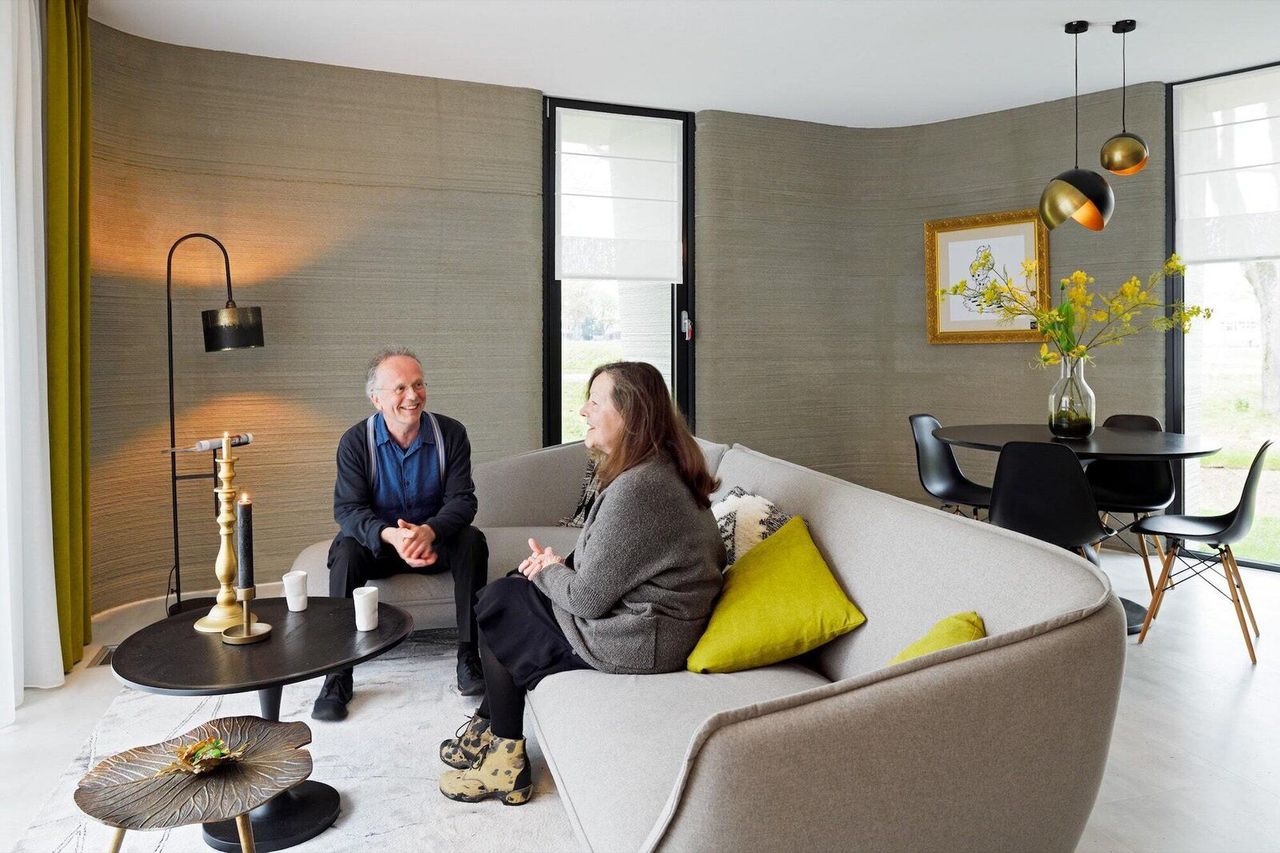 The home has 94 square meters (1011 square feet) of living space, with an open-plan living, dining, and kitchen area and two bedrooms. Large windows flood the interior with natural light. The built-in kitchen and bathroom were fitted on-site, along with windows, flooring, roof, and other finishing details.

An enormous robotic arm with a nozzle printed the home using an architect’s plan and a specially developed concrete that is printed in layers. According to the developers, printing with concrete has many advantages over traditional construction-including the ability to create interesting shapes without the need for formwork, a faster construction process, and the ability to create reinforcement and openings at the same time. And, due to the robotized nature of the technique, construction can take place 24 hours a day. The interior and exterior walls feature the same pattern, which expresses the 3D-printing construction technique. 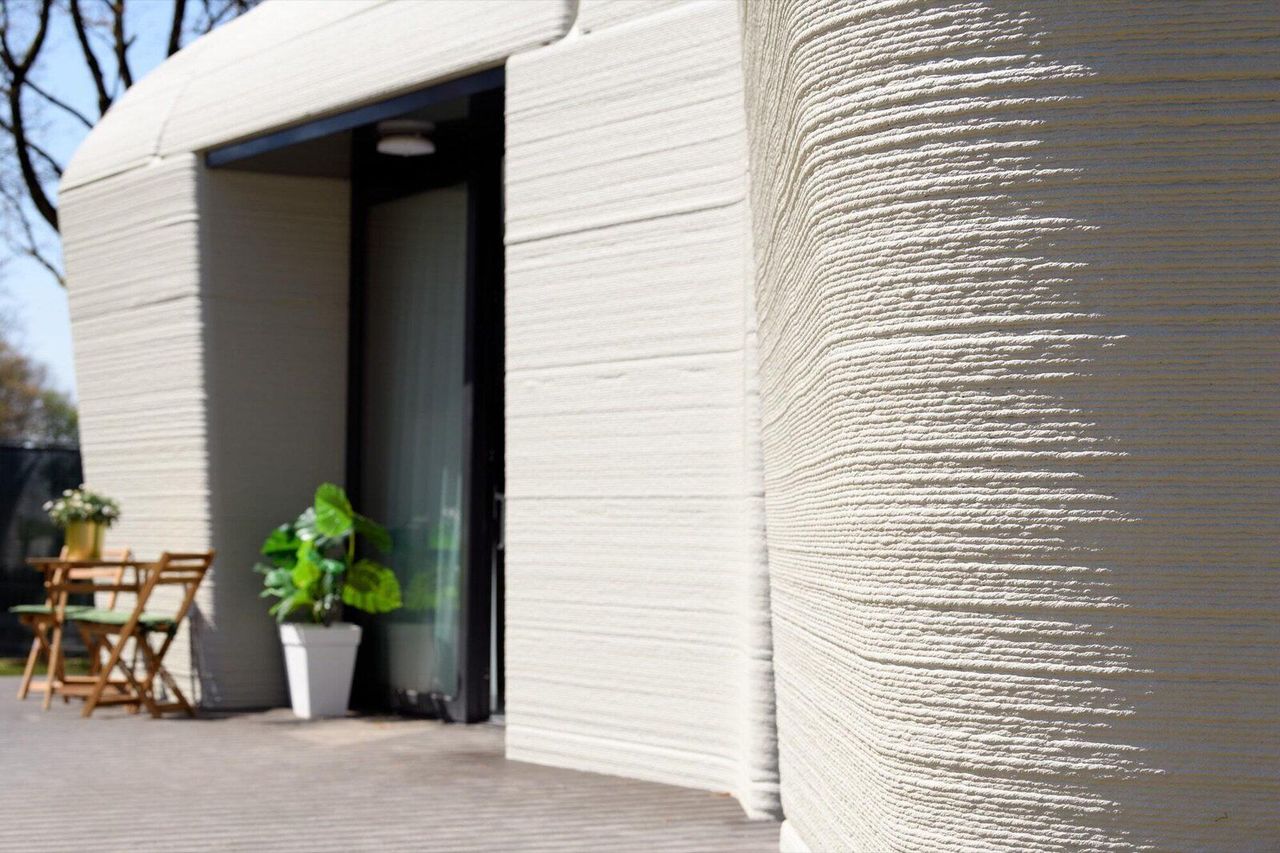 The home was printed using a specially formulated concrete mixture. Given the quality of the materials, the developers expect a project lifespan of well over 50 years.

The construction also offers impressive sound insulation. "It is very quiet in the house, in every room," says Elize. "As soon as you close the door, you don’t hear anything. You really are in your own bubble." Extra-thick insulation and a connection to district heating mean the house is also highly energy efficient.

Project Milestone also aims to explore unusual building forms that are only made possible through the use of 3D-printing-the curvaceous, boulder-like form of the first home would be costly and difficult to build using traditional methods. The pattern on the home’s walls is a visual expression of the construction process-it shows the layers of concrete printed by the robotic arm, and the points at which the nozzle head needed to be changed during the build. 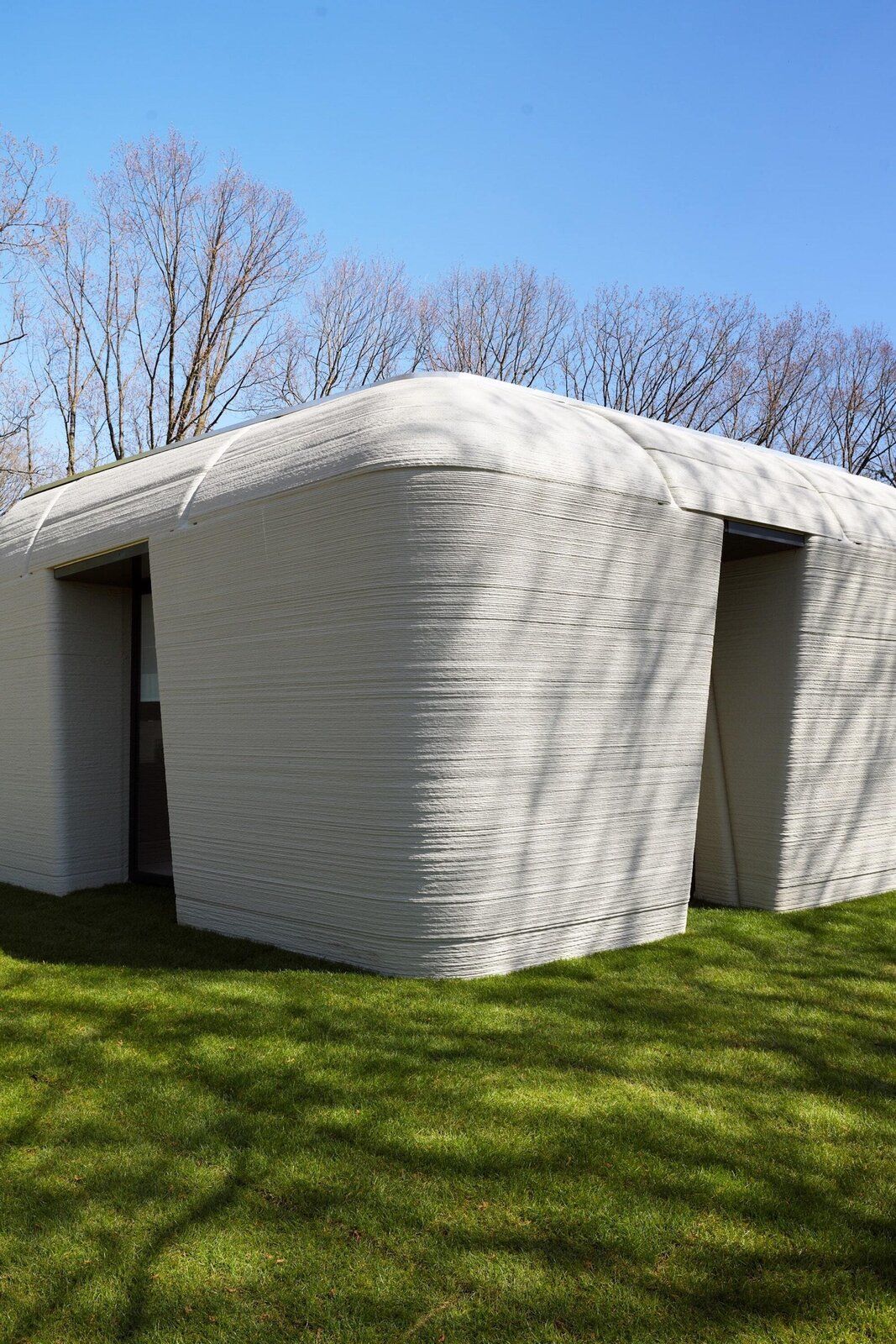 The home’s bold, curved form was made possible by the 3D-printing process-although there were construction delays due to the original architect’s design, which includes challenging overhangs on the external walls.

It took just 120 hours to print 24 one-meter-high sections at a factory, which were then transported by lorry to the site, and fixed to a foundation. The finishing touches, including the windows, doors, and roof, were then fitted on-site.

The learnings from executing this home will go on to inform the design of four additional houses that will make up the Project Milestone community. Each home will push the construction process further, and the fifth and final dwelling-a three-story, three-bedroom family home-is designed to be printed entirely on-site. The home has an energy performance coefficient of 0.25, making it highly energy efficient-yet the developers believe there is still room for improvement through the use of materials. They believe that they can reduce the amount of concrete required for future homes, leading to a lower CO2 footprint. A rendering shows the plan for all five of the Project Milestone homes, which will increase in size and ambition as the initiative progresses. While the first home is a simple two-bedroom bungalow, the fifth home will be a three-story, three-bedroom family home.

The entire process-from development to construction-is digitized, which optimizes the use of materials and construction time. It also means there is exciting potential for the new technology to create more affordable and sustainable housing that meets the demands of modern living. The home combines 3D-printed concrete walls with more traditional building materials, including plasterboard internal walls and standard window and door frames. The homes don’t have a gas connection, but they will be connected to district heating installed by the local authority. 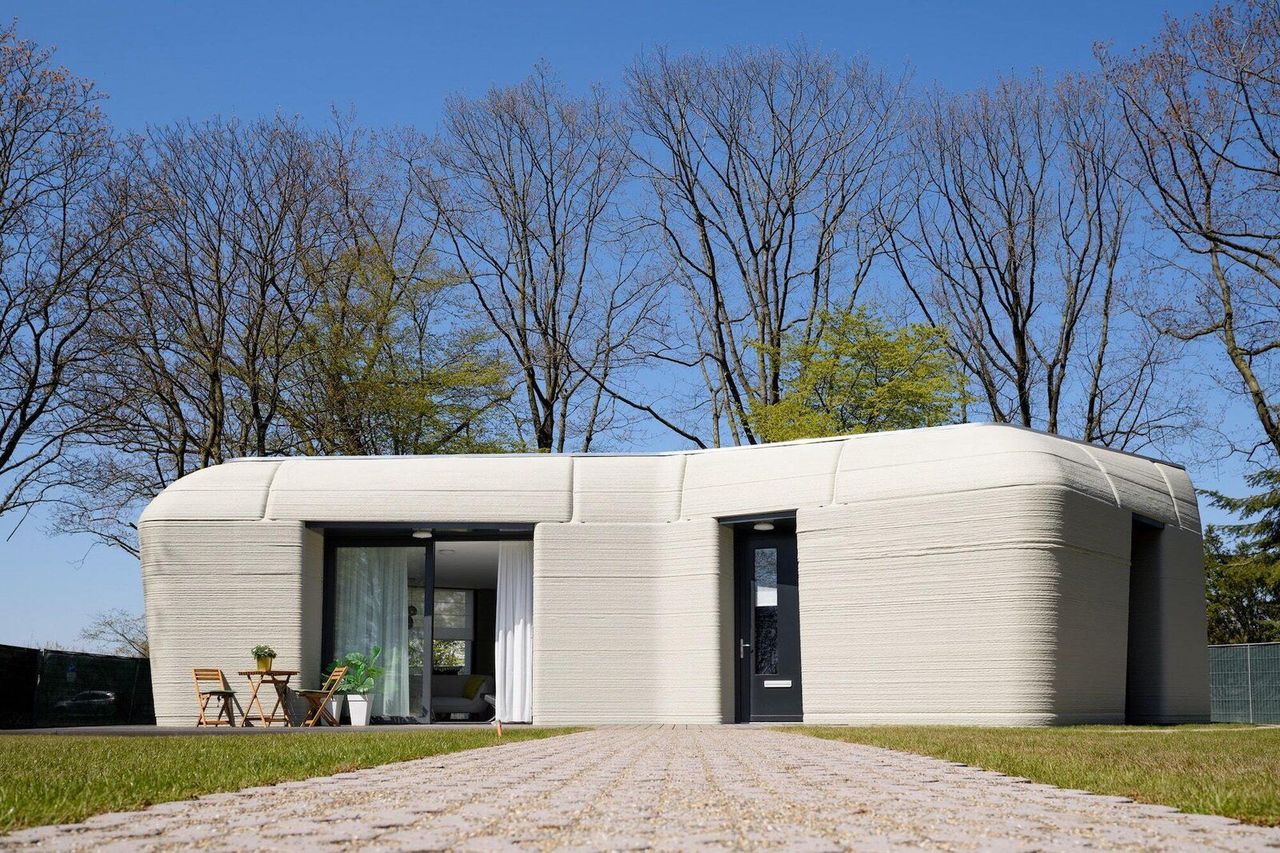 The tenants for the Project Milestone homes are selected from applications to Vesteda’s website. As new homes are completed, there will be additional calls for tenants.

As the first homes are completed in Eindhoven, the plan is to roll out Project Milestone to other countries. "The cost of house number one is high, but we have learned a lot," says Huysmans. "We know that, in the future, 3D concrete printing will contribute to making construction faster, cheaper, and more sustainable." The two-bedroom home under construction. Future homes on the site will explore techniques to print the floor and roof, and homes will be increasingly printed on-site rather than prefabricated in a factory.