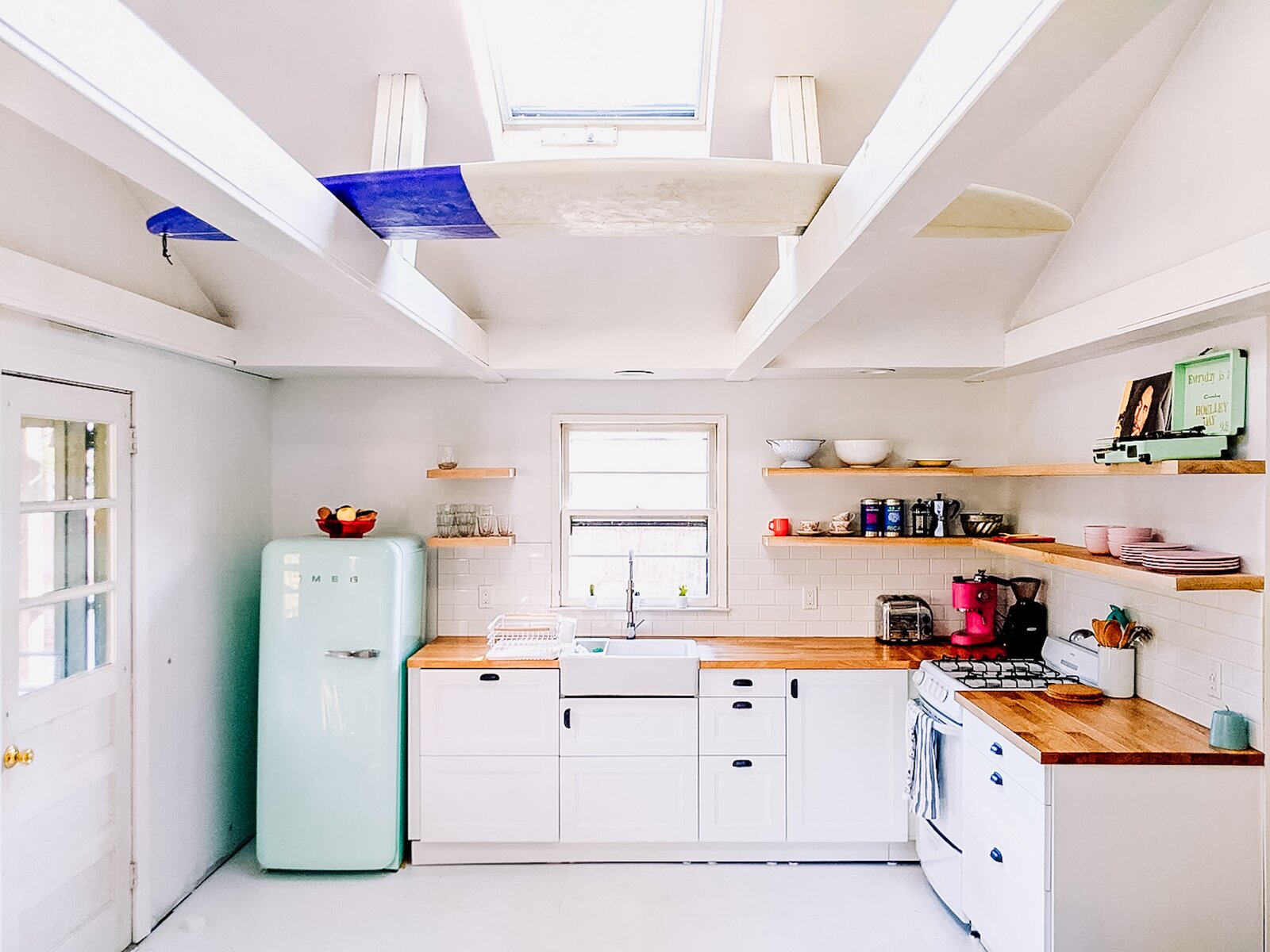 It can be challenging to spot a diamond in the rough, but Sophie-Claire Hoeller and Timothy Holley have a keen eye. "It wasn’t love at first sight by any stretch of the imagination," confesses Sophie, remembering when she and Timothy first saw this 1950s cabin in East Hampton. "But we were somehow both immediately able to see the place’s potential." After scooping up the home, the duo spent the better part of a year doing much of the renovation themselves, ultimately planning to rent it out on Airbnb while they weren’t there. The couple purchased the home with the intent to rent it out on Airbnb on the weekends, but have spent the past year living there during the pandemic.

However, 2020 had other plans in store: Just as they wrapped up the major stages of the revamp-"We basically gutted the place," explains Sophie-their workplaces, and much of their surroundings in Brooklyn where they live, shuttered in March of 2020. With nowhere to go and nothing to do, the couple went full-time at the Hamptons property, adding finishing touches to the home. 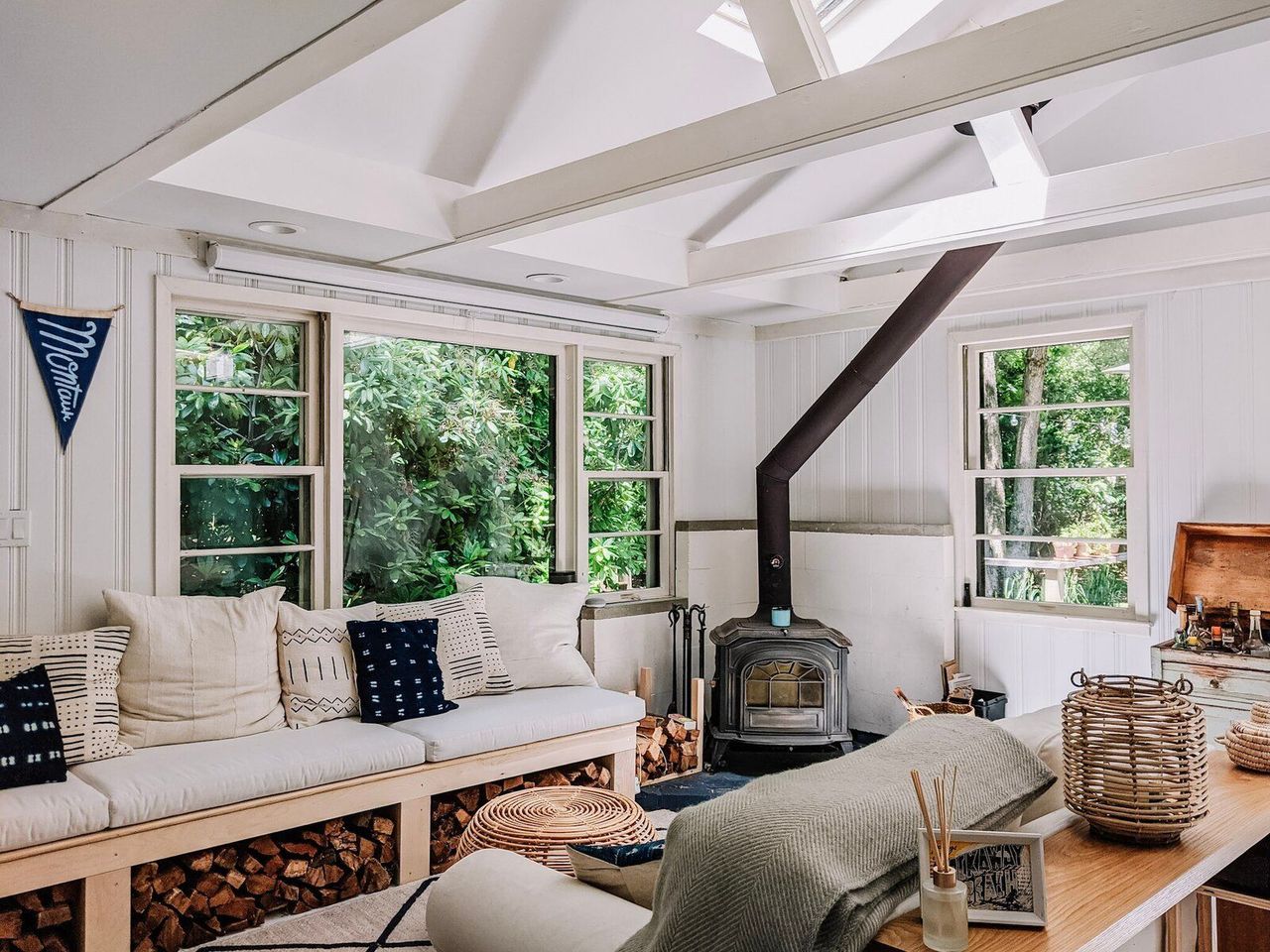 Sophie-Claire Hoeller is an Austrian-born writer and editor, while her husband, Tim Holley, is a UK-born expatriate who works in tech for Etsy. The two met in Germany before coming to New York.

The house is estimated to have been built at some point during the 1950s, and had been remodeled with an addition at some later point. It was a "hoarder’s paradise," says Sophie, half joking. Clutter and dust cramped every corner, and peeling brown linoleum flooring ran throughout. 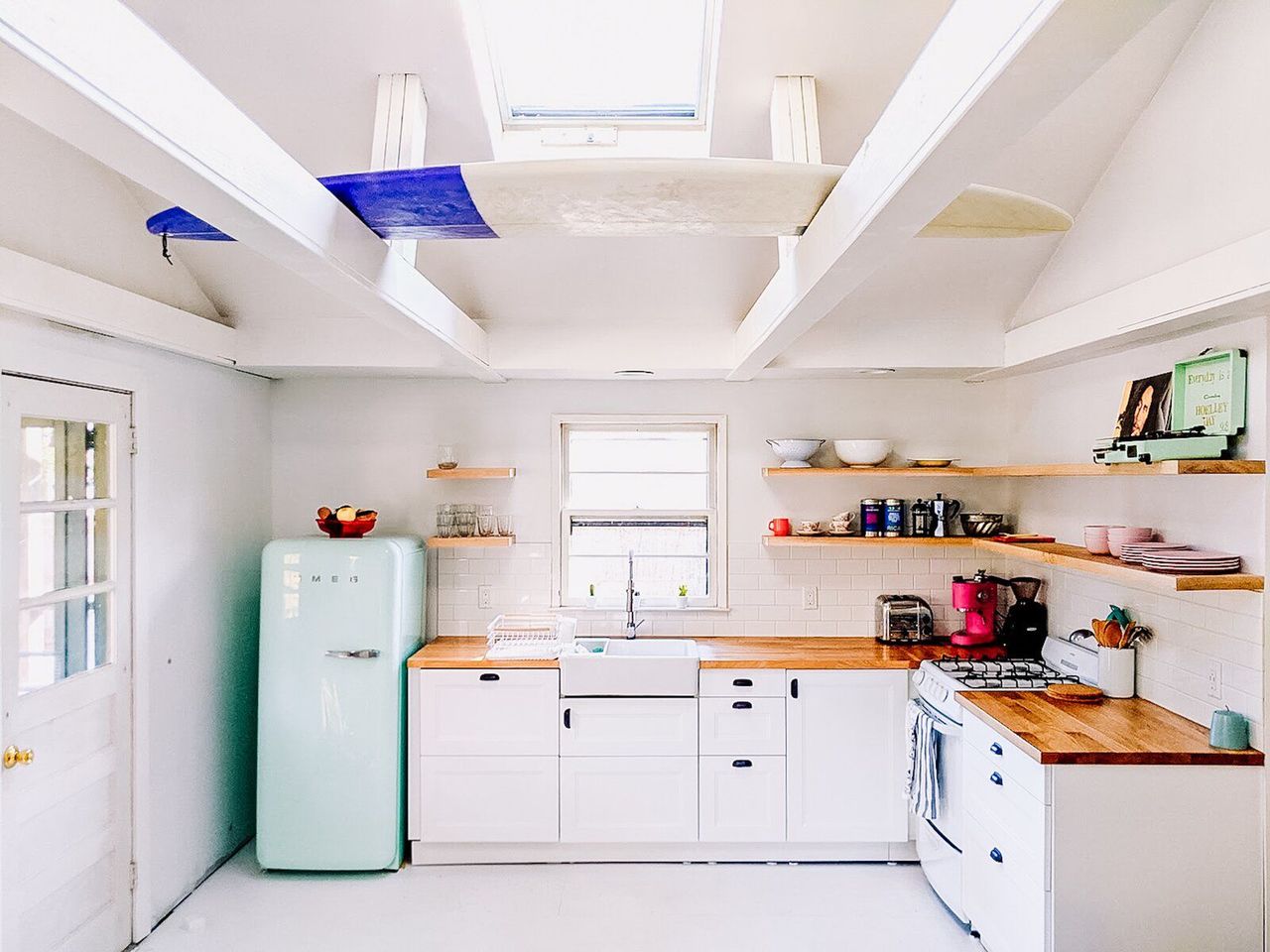 They gutted the kitchen and went with a bright and fresh palette of all-white walls, floors, ceiling, and cabinetry. The Smeg refrigerator adds subtle color, and the butcher-block countertops bring warmth and texture.

The spatial arrangement of the original home was a little funky; it had a tiny living room and kitchen, but a huge primary bedroom. To introduce a more balanced floor plan, the couple removed nearly all of the interior walls to start anew. The layout now features an open kitchen, dining, and living area, a larger and more functional bathroom, an area for a home office that could later become a second bathroom, and two appropriately proportioned bedrooms. Built-in closets and additional shelving also went in, and the deck outside was replaced. 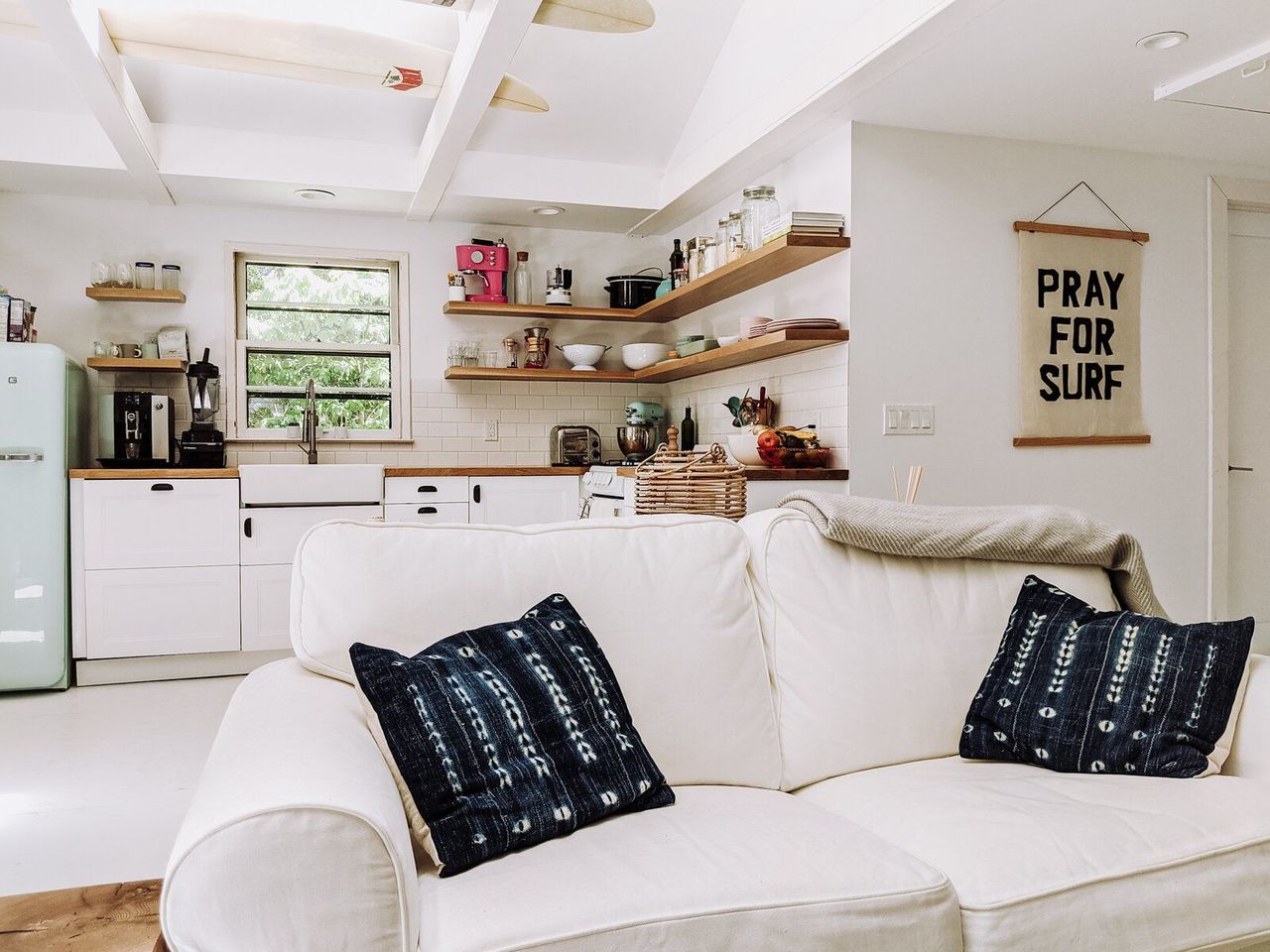 Surfboards placed above the rafters in the kitchen and living area serve as artwork. Next to the couch are tables that Tim handcrafted from a beam that was part of an old Amish barn. 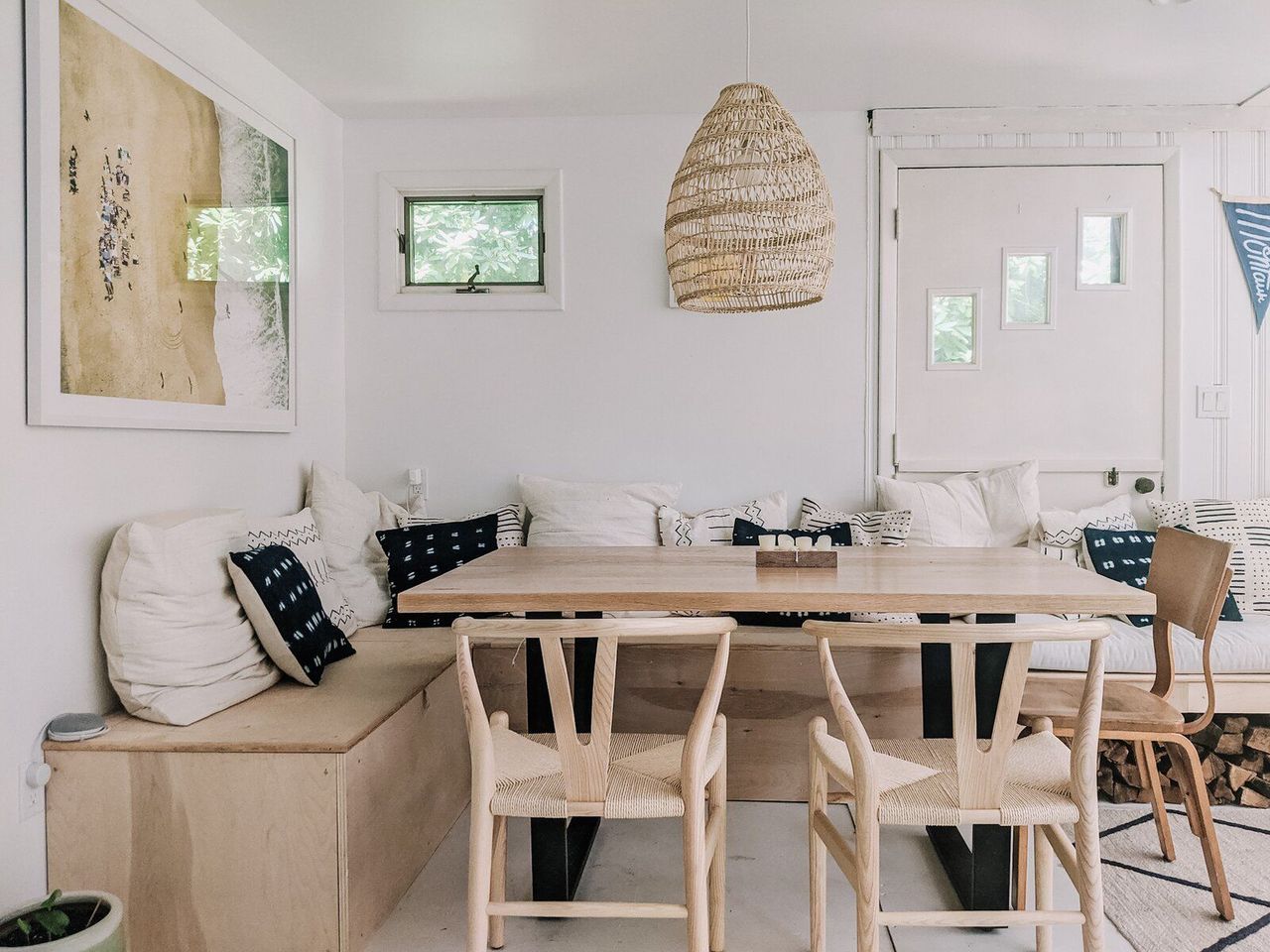 One of the couple’s favorite moments in the home are the banquettes in the dining area. "We both grew up in Germany," explains Hoeller, "where wraparound seating areas at the dining or kitchen table are common."

Though the couple hired out for electrical work, framing, and drywall, performing the demolition and installations themselves was no small feat. "I have less than no experience doing any sort of renovations or DIY," says Sophie wryly. "I don’t even have the patience to pick up a creative hobby." 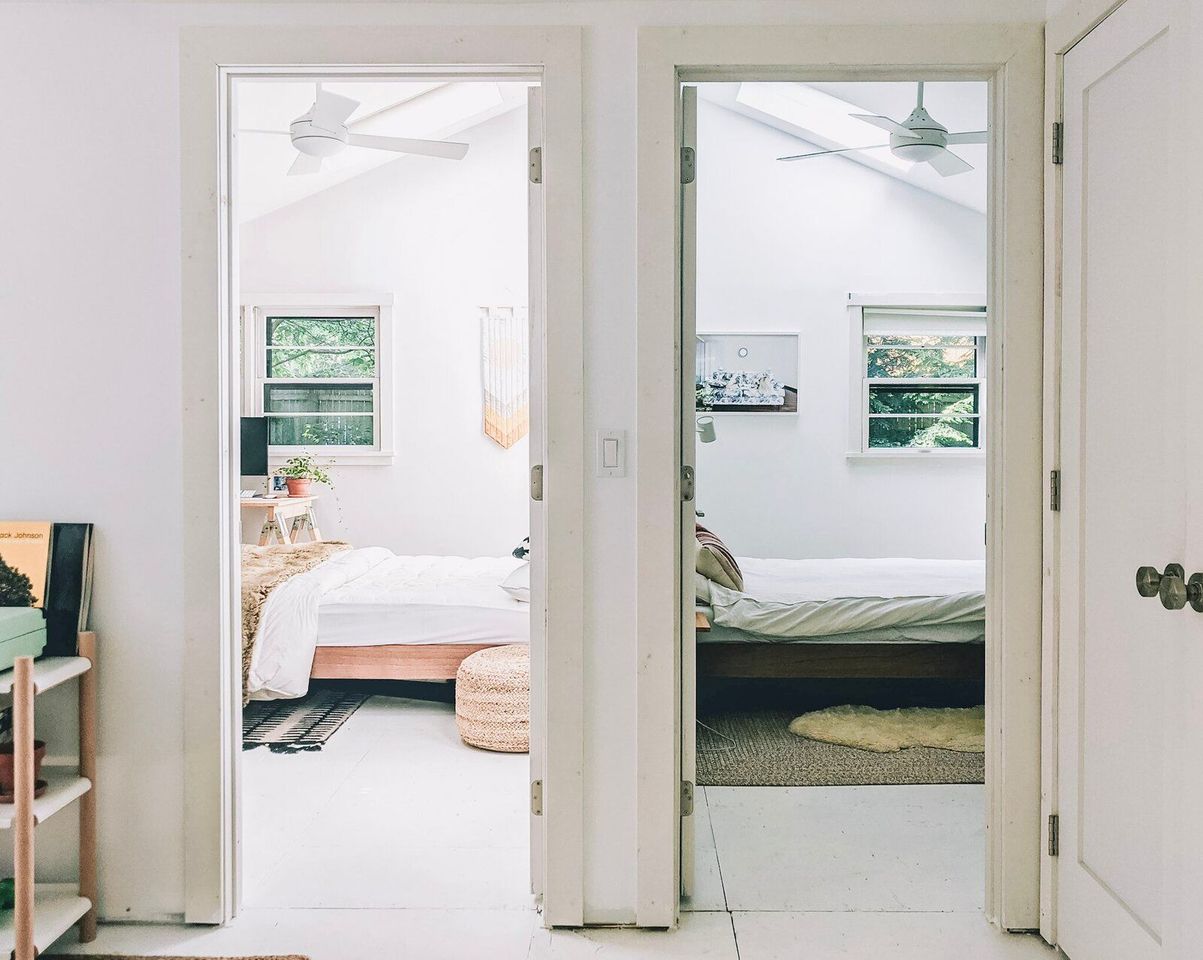 A major part of the renovation was reframing and resizing the two bedrooms. Now, they are mirror images of each other in plan, with distinguishing decor and furniture.

Tim was a bit handier-he did everything from installing the toilet and bathroom tiles, to building several pieces of furniture: side tables, built-in benches, the dining room table, the headboards for the bedrooms, shelving, closets, and more. The couple’s vision for the renovation was to create a space that felt fresh and warm, but still modern and beachy. Although the house isn’t next to the beach, its location in the Hamptons, along with the duo’s love for the water (and Tim’s surfing habit), served as inspiration for the decor and furniture. "We wanted it to feel like you could open the front door and see the ocean," explains Sophie. 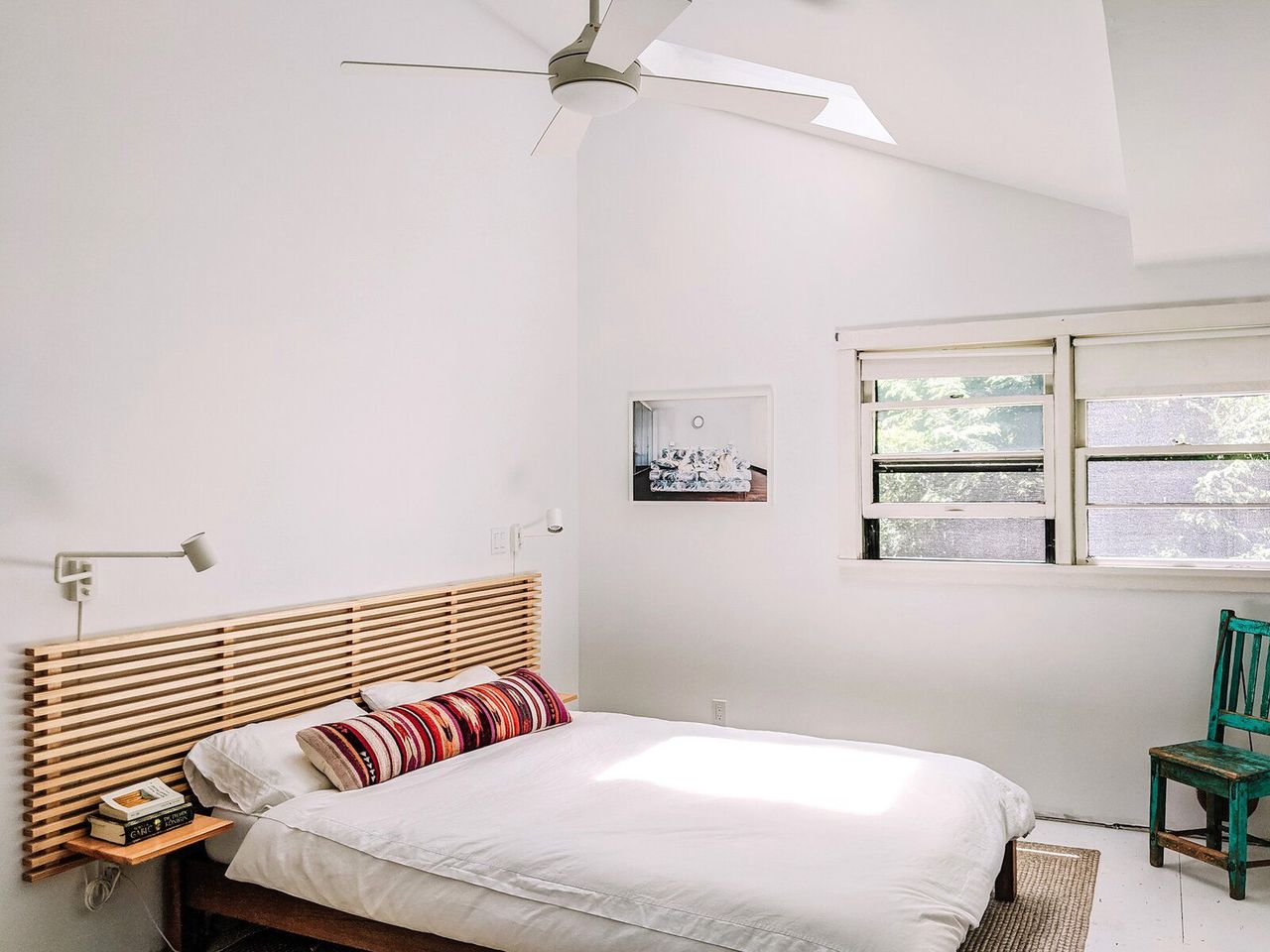 Artwork thoughtfully placed throughout the rental is another element to appreciate, thanks to Sophie’s mother, who’s a gallery curator. A Vincent Gallo hangs in the reading nook, while a Thomas Locher is in one of the bedrooms. The aerial beach shot in the dining room adds a personal touch: It’s an image of Sophie and Tim’s post-wedding brunch on the beach in nearby Montauk. The expanded bathroom received a new sink, toilet, flooring, and a washer/dryer. "From demo to installation, we did absolutely everything with our own hands, besides the electrical work and putting up the framing and drywall," says Sophie. The couple was able to keep the existing tub.

Despite the setbacks of the pandemic and unexpectedly spending so much time in the cabin, their shared vision and collaborative spirit made it easy to move forward. They enjoyed spending time working towards a common goal, but they’re still not done: Currently, a 200-square foot shed in the yard is set to become an office and guest room. The couple also redid the deck, making it an ideal place to lounge and entertain. "From demo to installation, we did absolutely everything with our own hands, besides the electrical work and putting up the framing and drywall," says Sophie.