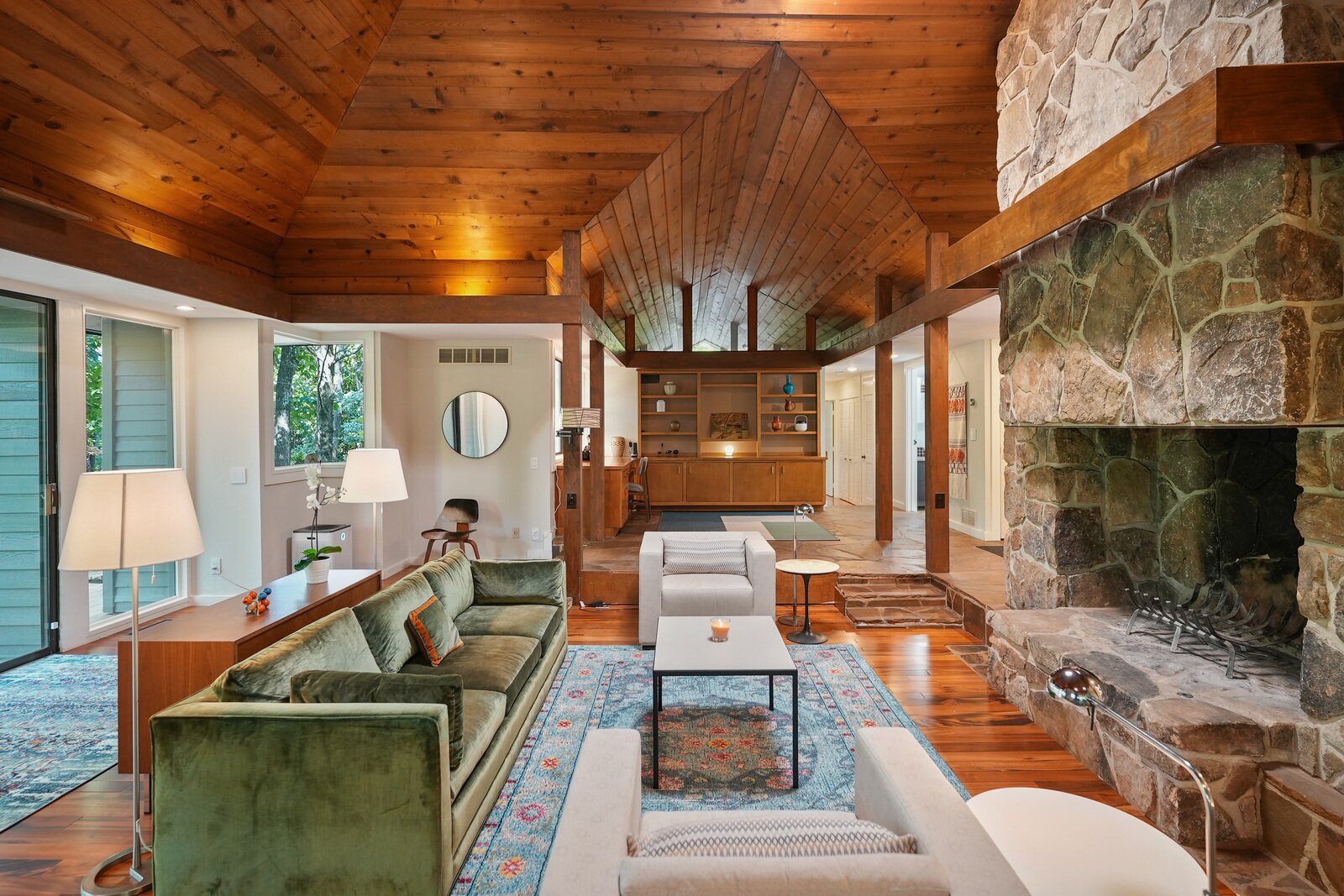 In the late 1950s, after dropping out of Georgia Tech, Robert Miller Green sent his portfolio on a whim to Taliesin West, Frank Lloyd Wright’s desert retreat and school in Scottsdale, Arizona. His hope was that it would make it to the desk of the renowned architect. Soon thereafter, Green, at the age of 23, received an invite to visit Wright, who was 90 at the time. Though neither of them knew it, Green would become Wright’s final apprentice. 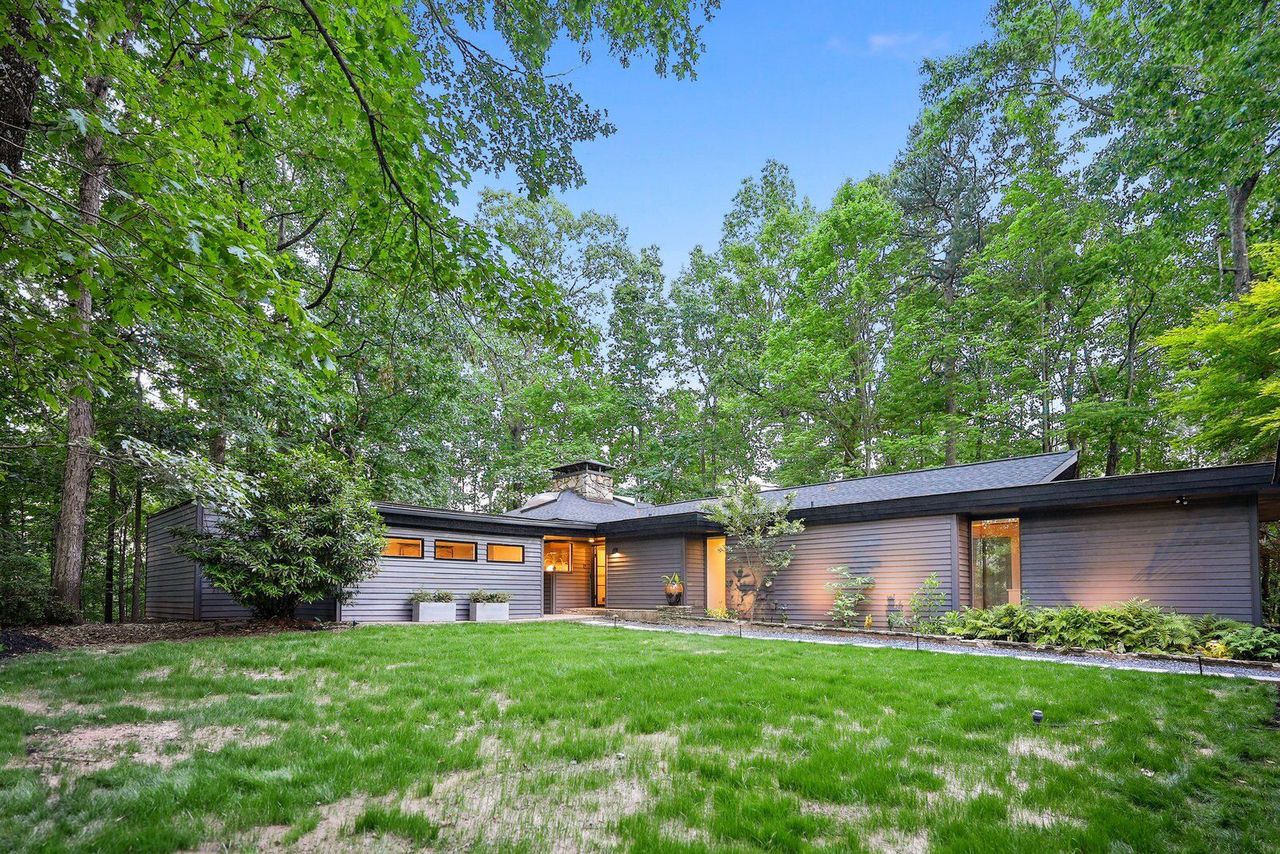 Set on a hilltop lot, the 1974 home offers a quiet city escape while being conveniently located to various popular areas, including Buckhead, Midtown, and Sandy Springs.

Wright died six months into Green’s fellowship at Taliesin West, prompting Green to move back to his hometown of Atlanta, Georgia. He quickly got to work, starting what would become a 40-year career in architecture.

The former apprentice "established himself as the closest thing to Wright [Atlanta] has produced-in a state with no buildings by the American icon," reads a post by Atlanta magazine. Today, his works can be found in and around the city, with one dwelling having recently hit the market. 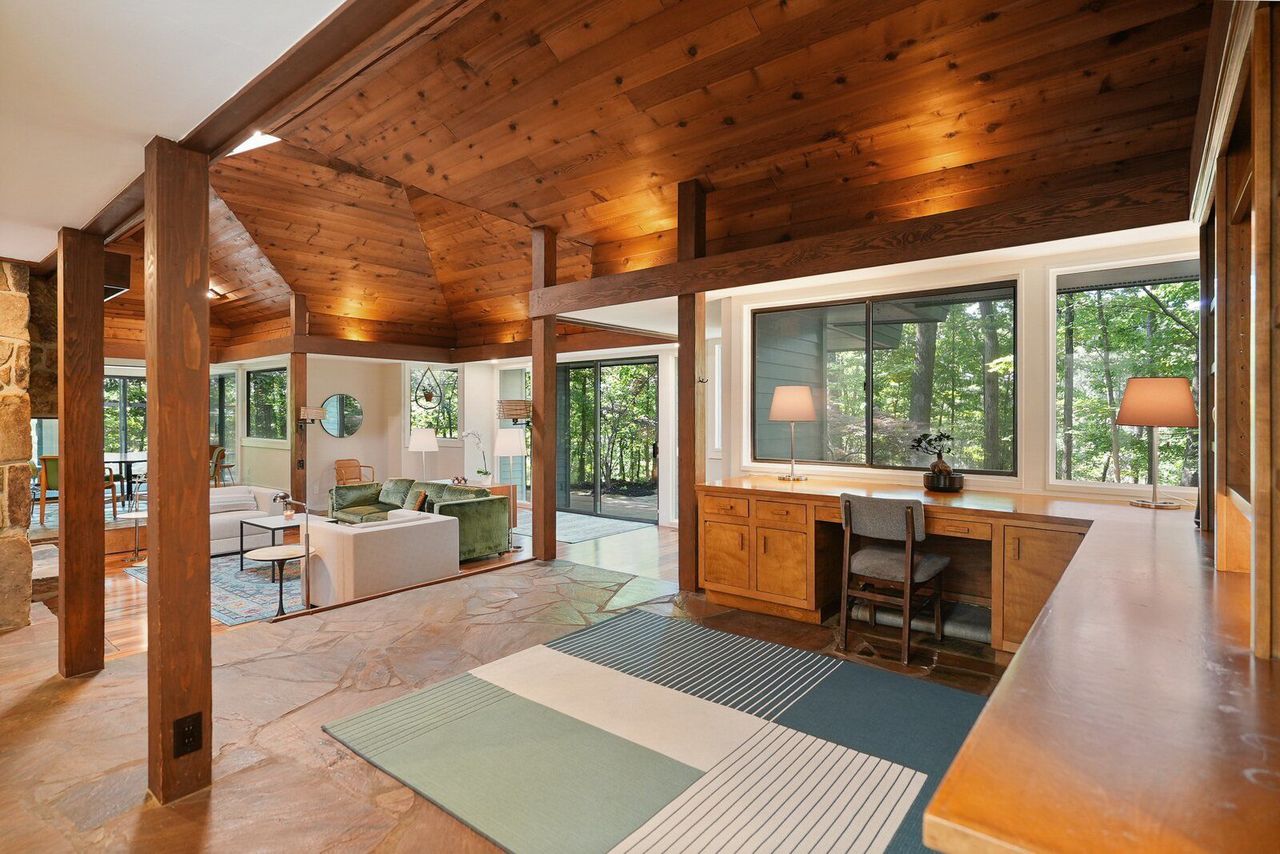 Upon entry, an extensive built-in desk area sits at the edge of the primary living spaces.

Designed in 1974, the residence sits tucked away on a one-acre lot, offering a secluded, private oasis. Natural elements of stone, wood, and glass, unite to help blend the home into its lush setting. 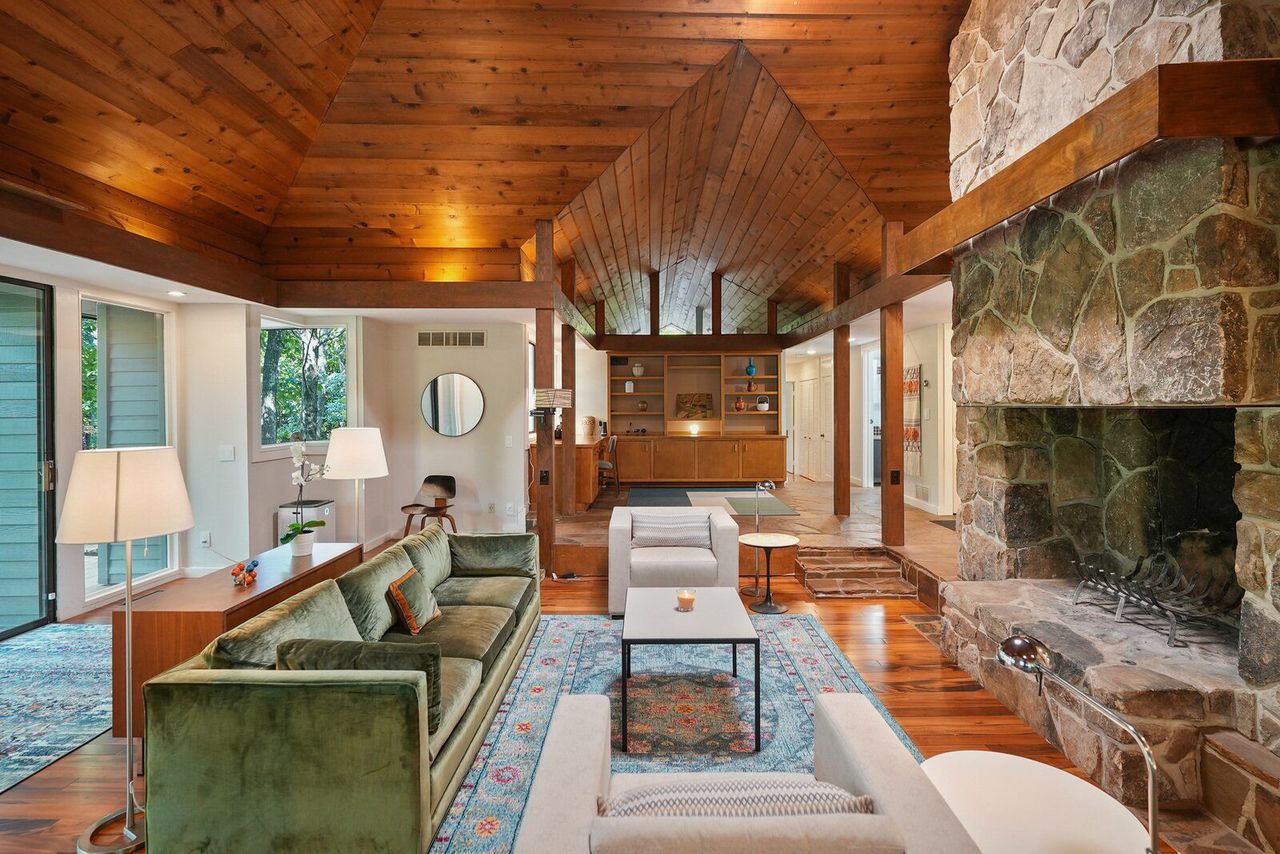 In the living room, recessed lighting is used to emphasize original wood-clad ceilings.

Measuring over 2,600 square feet, the dwelling has been meticulously cared for over the decades, with much of its original character intact. "One of my favorite features of the home is the multifaceted cedar ceiling in the main room, which continues uninterrupted through the remainder of the interiors," says the current owner. "The massive stone fireplace, which anchors the house and serves as a backsplash in the kitchen, is both striking and impressive." 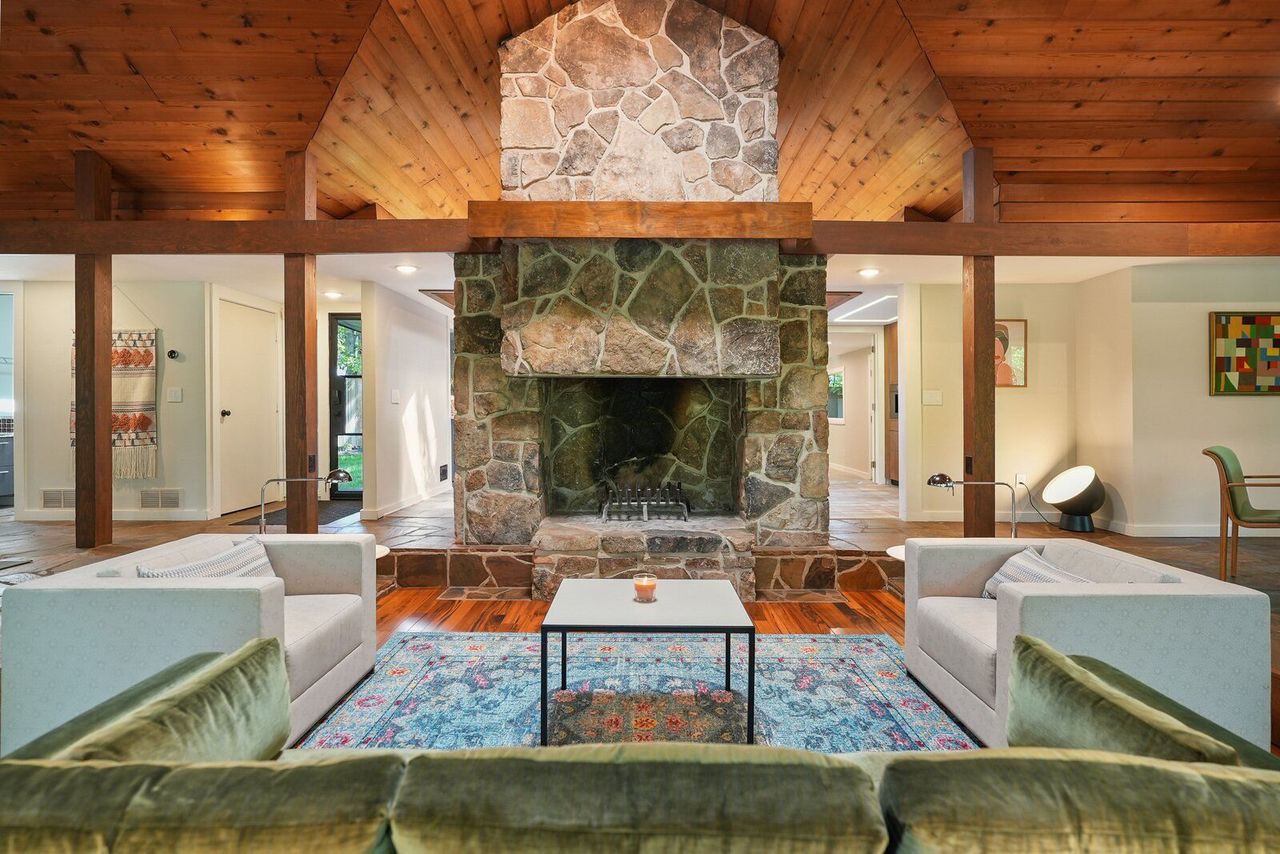 The broad stone fireplace soars to the ceiling, enhancing the room’s overall sense of scale.

To accommodate comfortable modern living, the residence has been treated to several updates, including a new roof, windows, an exterior deck addition, as well as a 1,200-square-foot garage with electric-car charging capability. The kitchen was also fully remodeled, and now sports new flooring, stainless steel appliances, and custom cabinetry. 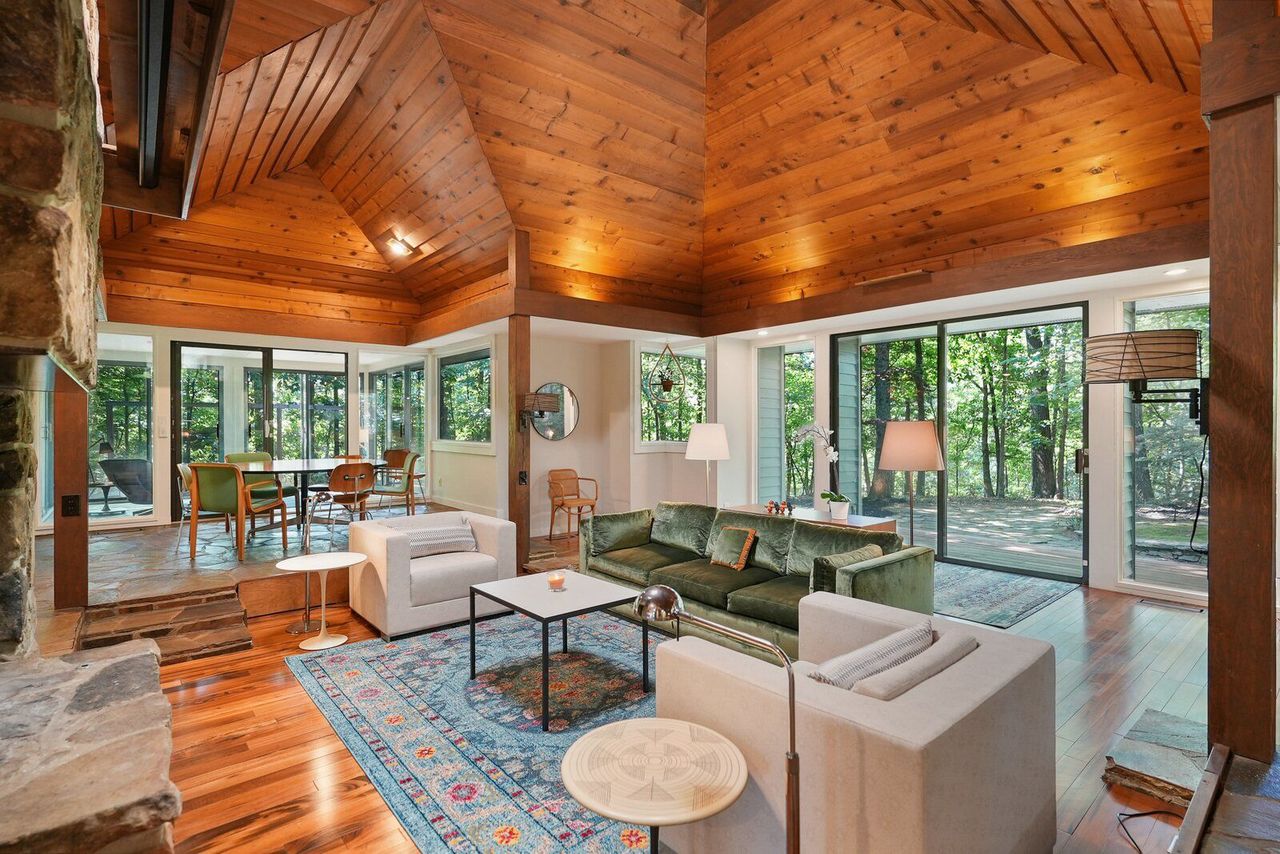 Another view of the living spaces showcases the open layout and cohesive material palette.

In addition to spacious, free-flowing living spaces, the home also offers three bedrooms, two baths, and a glazed sunroom. "Owning a Robert Green home is a rare and wonderful experience," notes listing agent William Bedgood. "This one in particular has no fewer than six sliding glass doors, allowing you to always feel surrounded by nature." Keep scrolling to see more of the property, currently listed for $749,000. 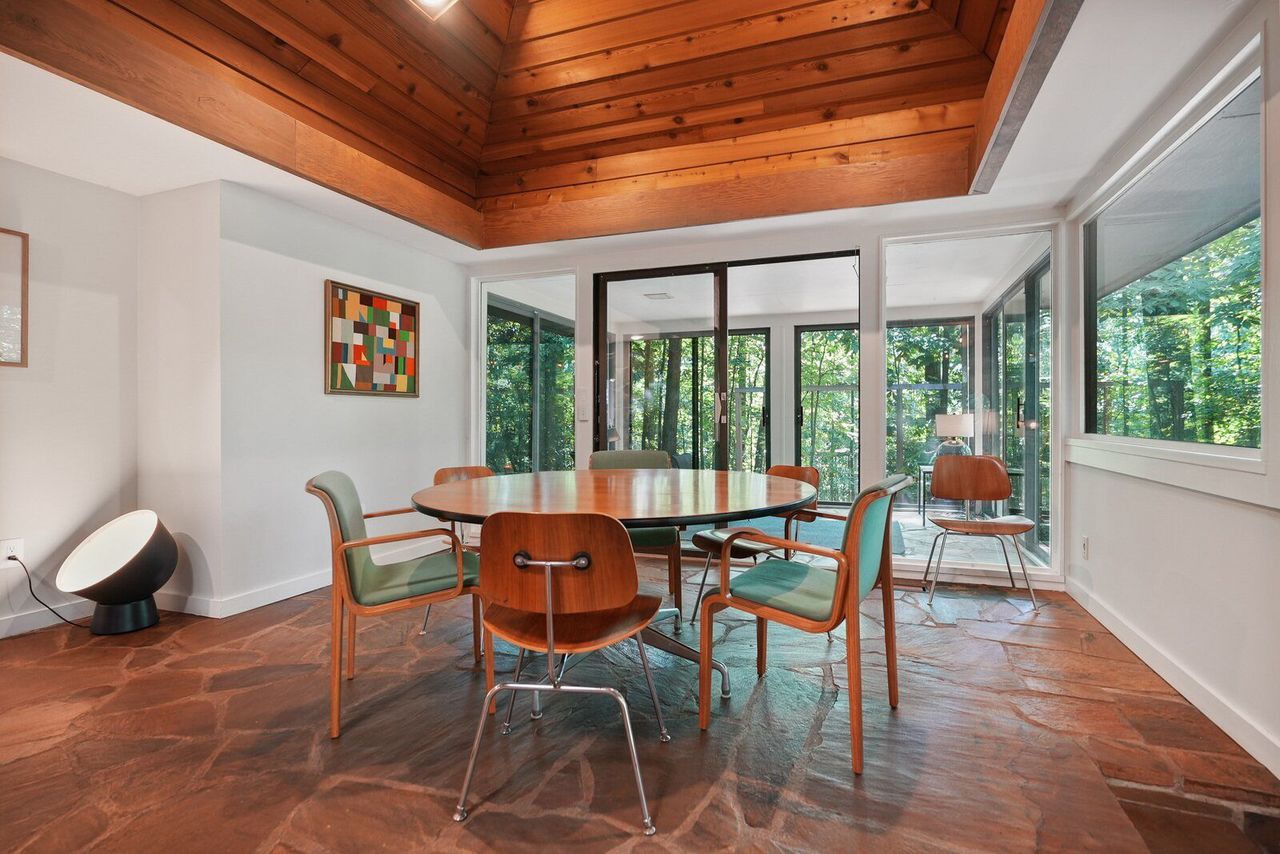 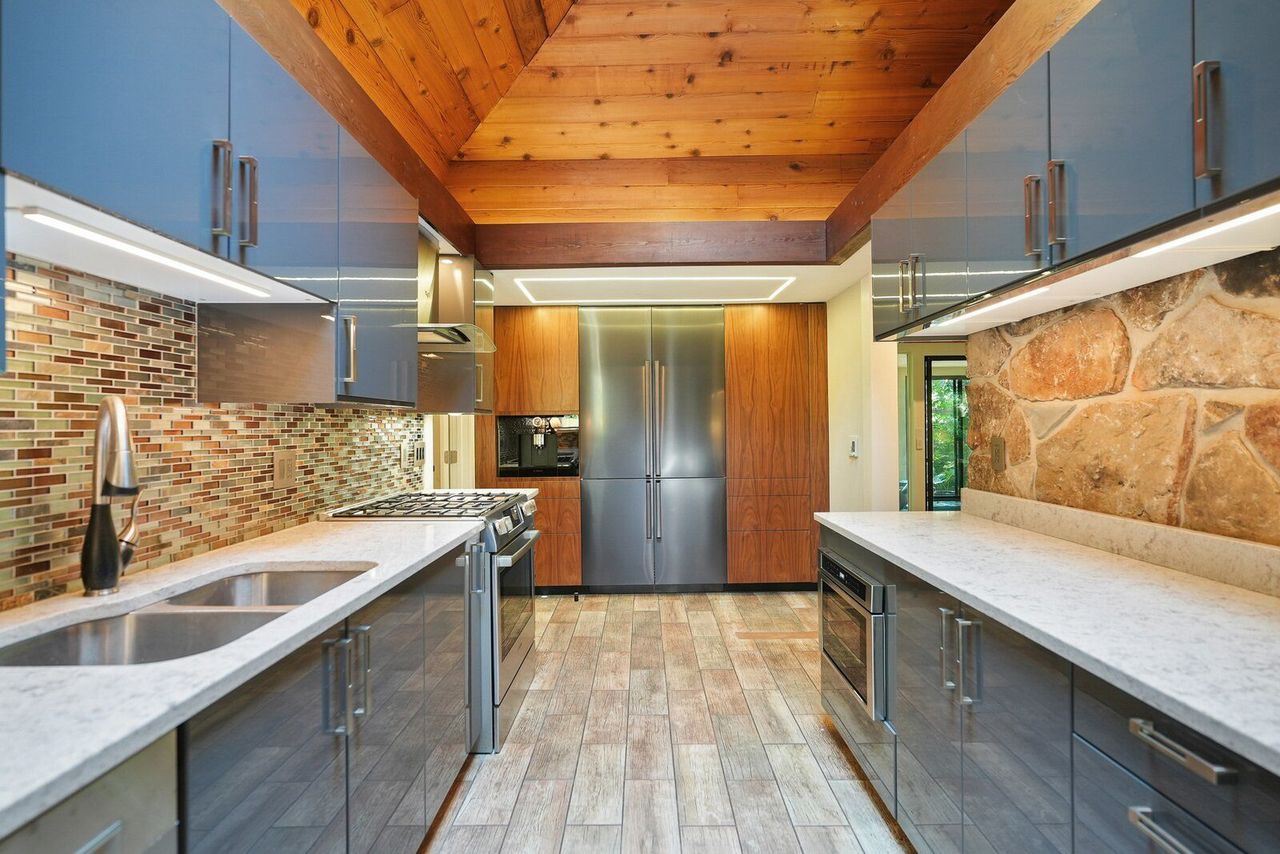 The vaulted ceilings continue into the kitchen, where blue cabinetry adds subtle color. 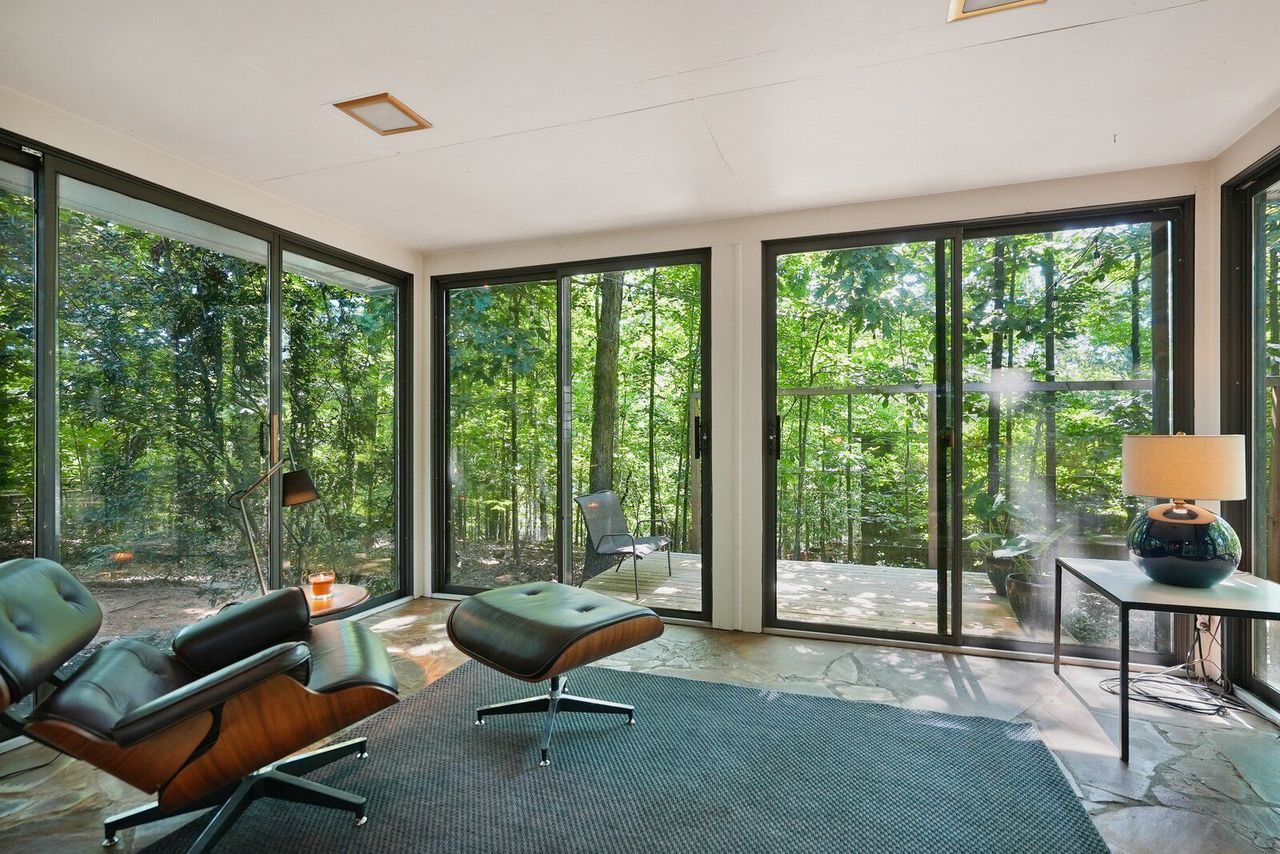 Sliding glass doors wrap around the rear sunroom, opening the space to the wooded lot. The sunroom is extended outdoors via a generous deck, offering a shaded corner to relax. 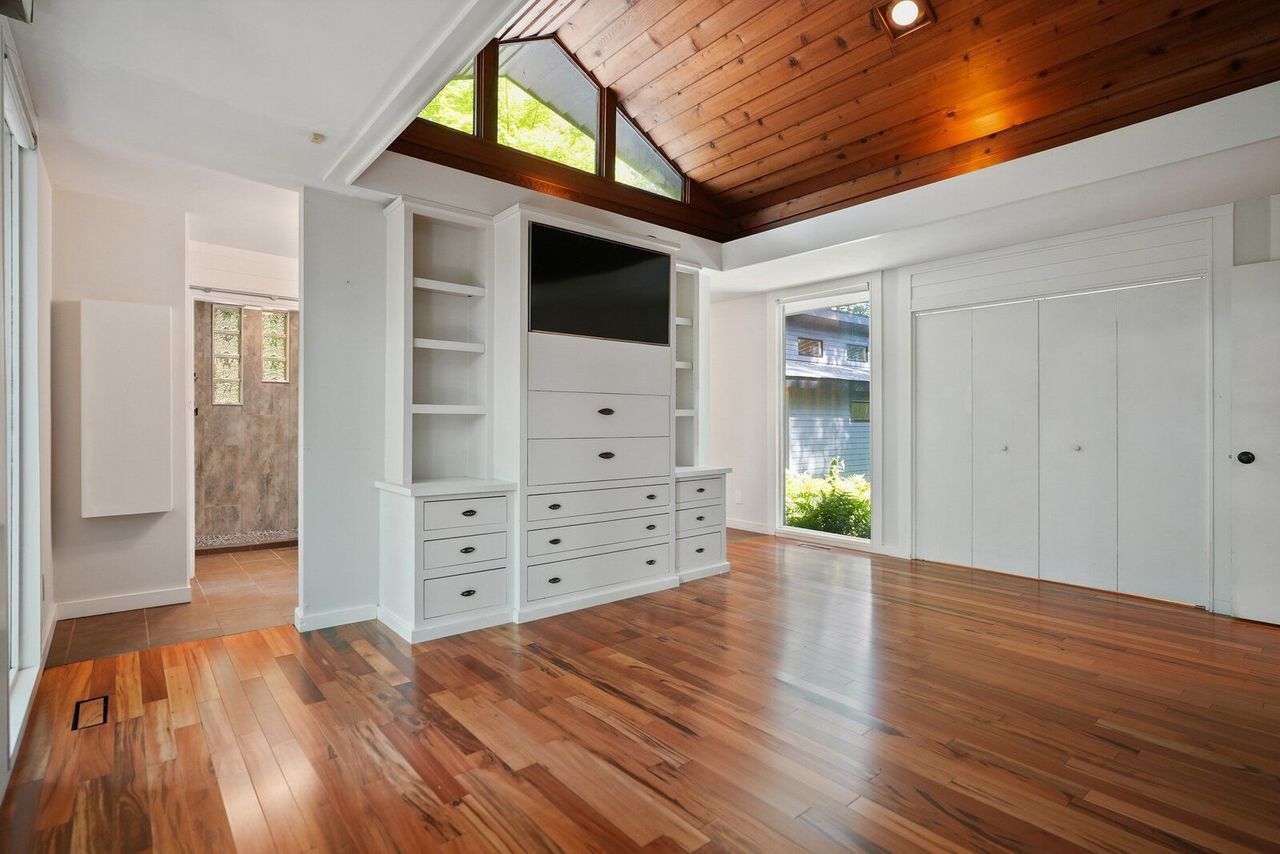 The primary bedroom presents a bright, airy retreat, complete with a custom-built shelving unit that divides the space from the ensuite bath. 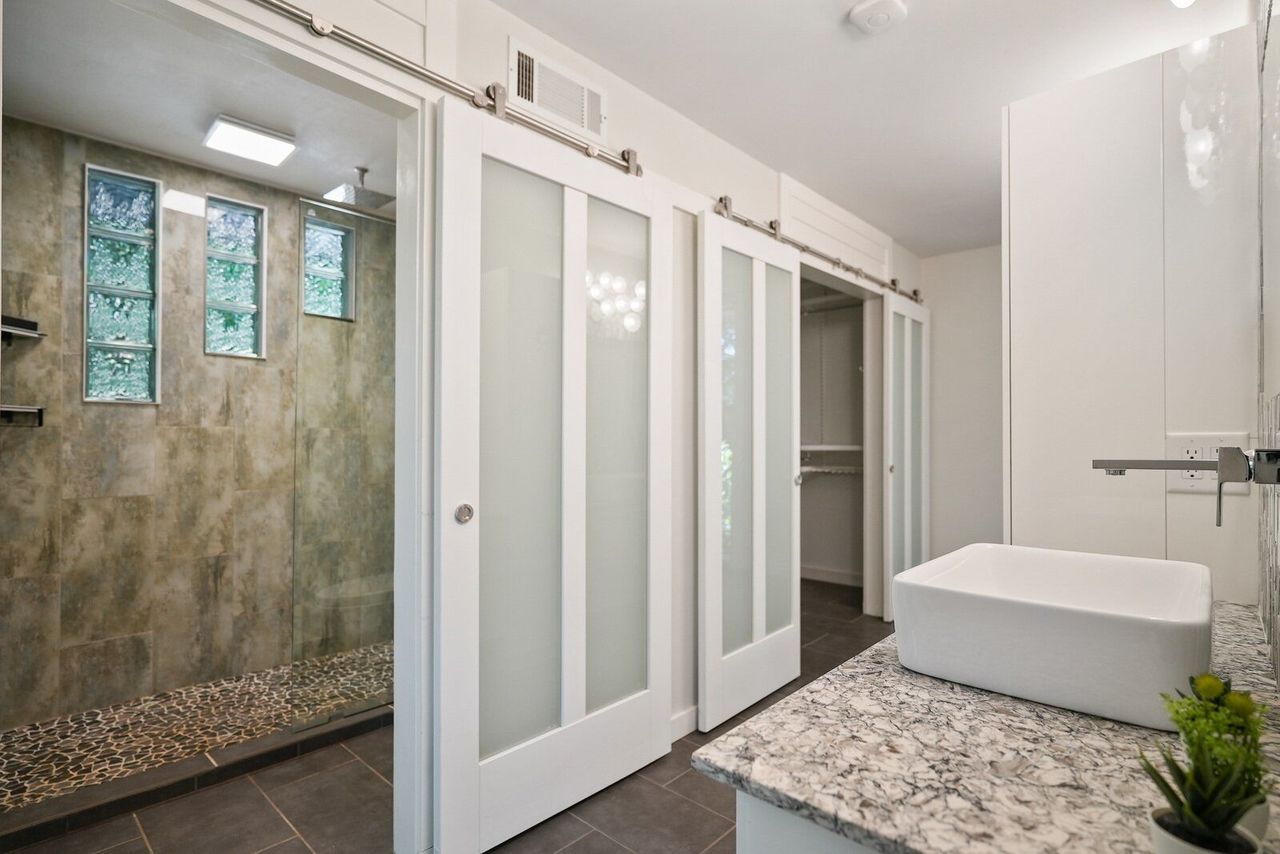 In the bathroom, two sets of sliding doors unveil an oversize shower and a walk-in closet. The home also includes a large bonus room, which can easily serve as an office, gym, or guest suite.