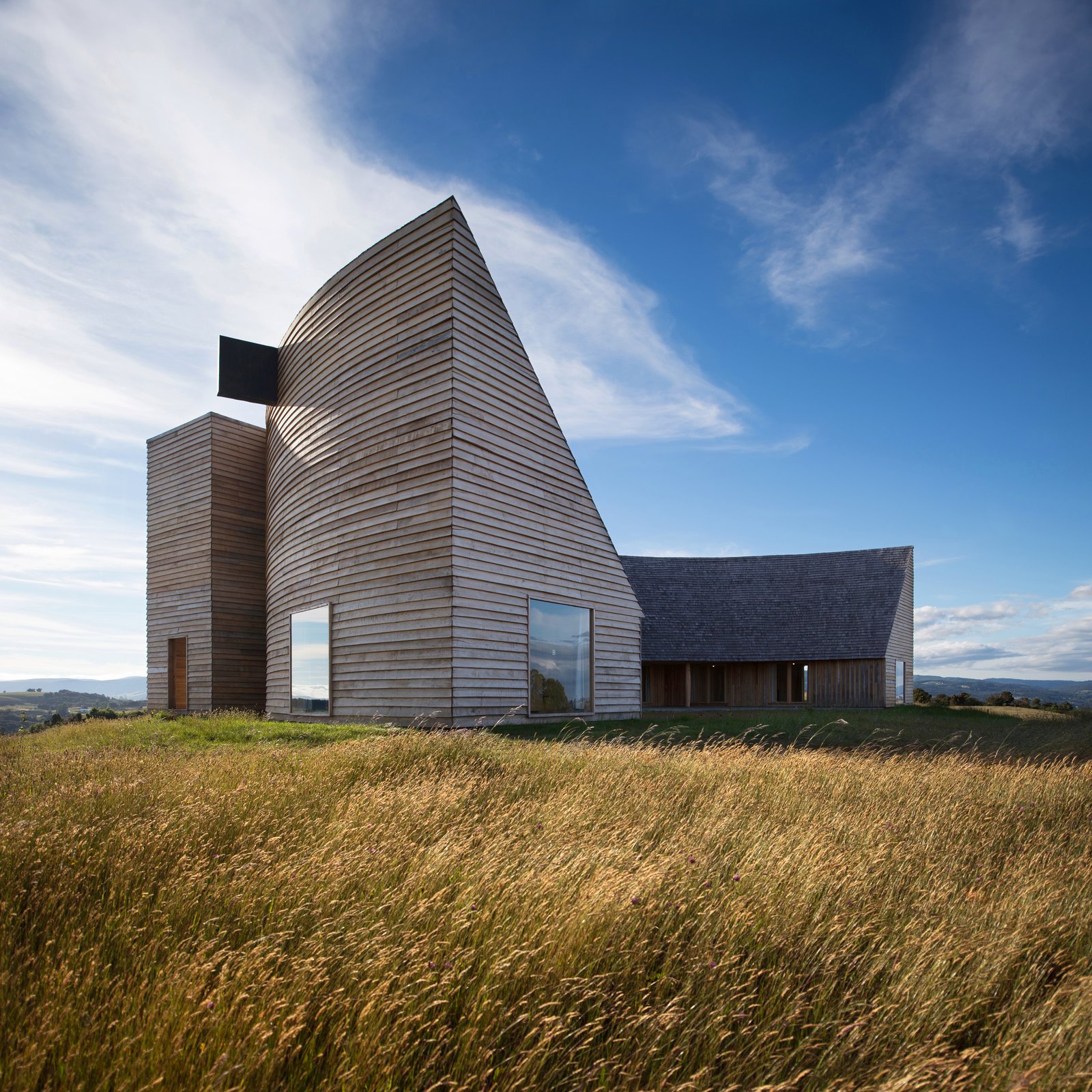 A Curvaceous Home in Chile Cuts a Dramatic Figure

The semicircular residence on Chiloé Island features a dramatic, sloping roof that extends over an interior courtyard.

Elevated on an expansive meadow and overlooking the sea, Rode House on Chile's Chiloé Island is designed by Mauricio Pezo and Sofia von Ellrichshausen of practice Pezo von Ellrichshausen -a Chilean firm known for their arresting, geometric architecture. In true form, the striking, semicircular residence boasts a roof that drops steeply to form two sharp peaks at either end. 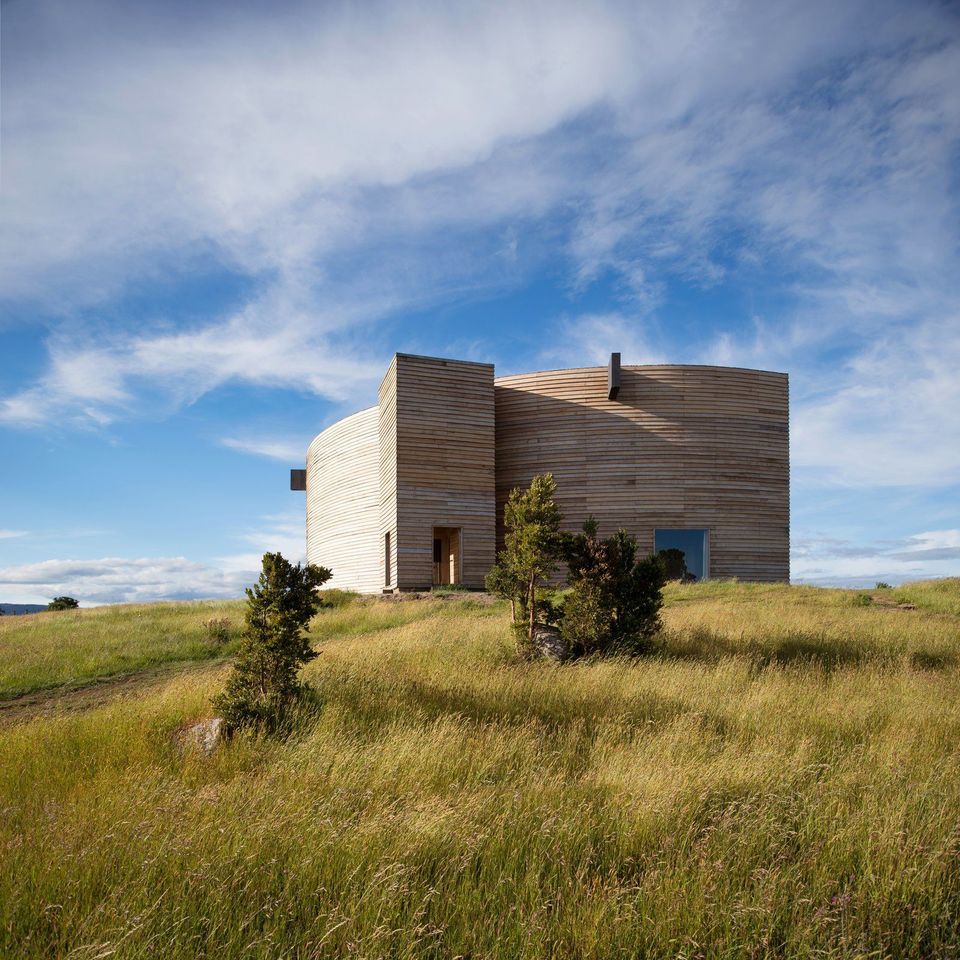 Built with 45 rigid frames of local timber set in a fan-shaped configuration, the 2,000-square-feet house has an enigmatic form that resembles a cylinder that has been cut in half along its diameter, then spliced with an inverted cone to create a sloping roof. The roof flares up in sharp, crescent-shaped peaks at either end.

The roof structure is clad in thin, wooden shingles while the exterior walls feature vertical timber boards that extend onto the soffit of the roof’s overhanging sections. The roof of Rode House falls precipitously down the inner curve of the semicircle.

The house is set within an expansive meadow.

"From one side, it stands as a massive and hermetic fortified refuge; from the other it appears as a large pitched roof almost without supporting walls," says Pezo. Though the home is asymmetrical, the dramatic variation in ceiling heights results in interior spaces with a calm, cavernous feel. In the middle section of the arc is a simple living and dining space.

Beneath the roof, the ends are squared off to create two triangulated bedroom wings that have the same dimensions, and that face each other across a garden. One of the bedrooms is oriented towards the north, and the other towards the south, so they frame different perspectives of the sun. 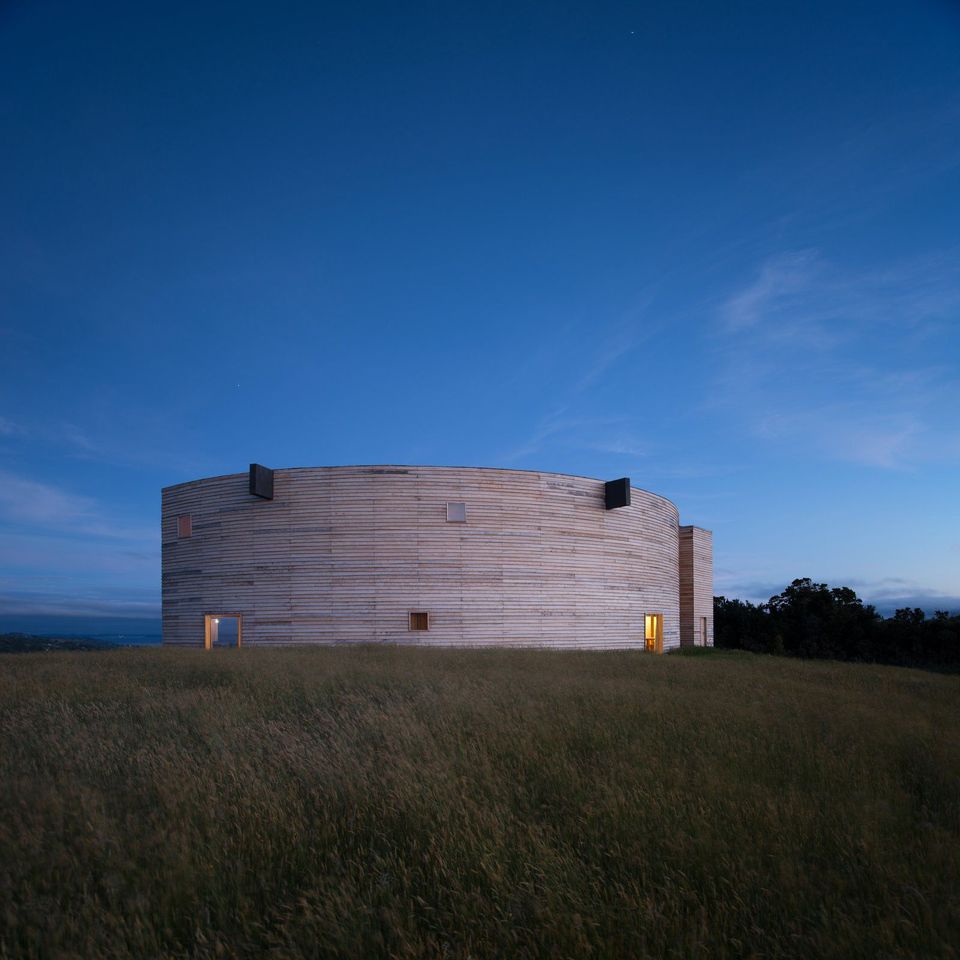 The 2,000-square-feet house has an enigmatic form that resembles a cylinder that's been cut in half along its diameter.

Between the two bedrooms, in the middle section of the arc, is a simple living and dining space that’s visually linked to the landscape by large doorways on both sides. Through a series of thresholds, the owners can access the garden and two courtyards located within the curve of the circle. 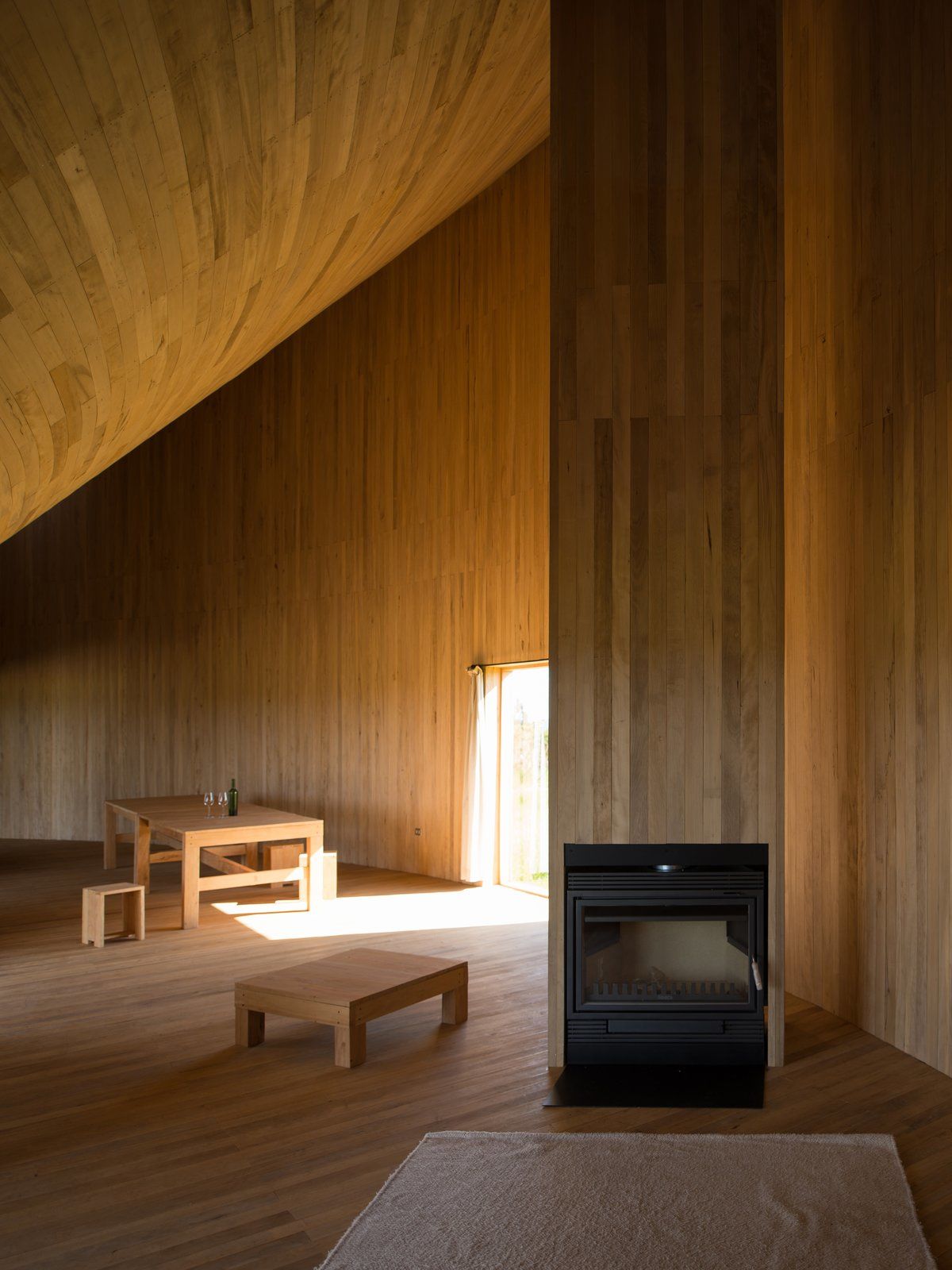 Through a series of thresholds, the owners can access the garden and two courtyards.

The combination of sloping roof and angled walls creates two sheltered corners within these courtyards, so the owners can relax outdoors and still be protected from the rain or strong winds. 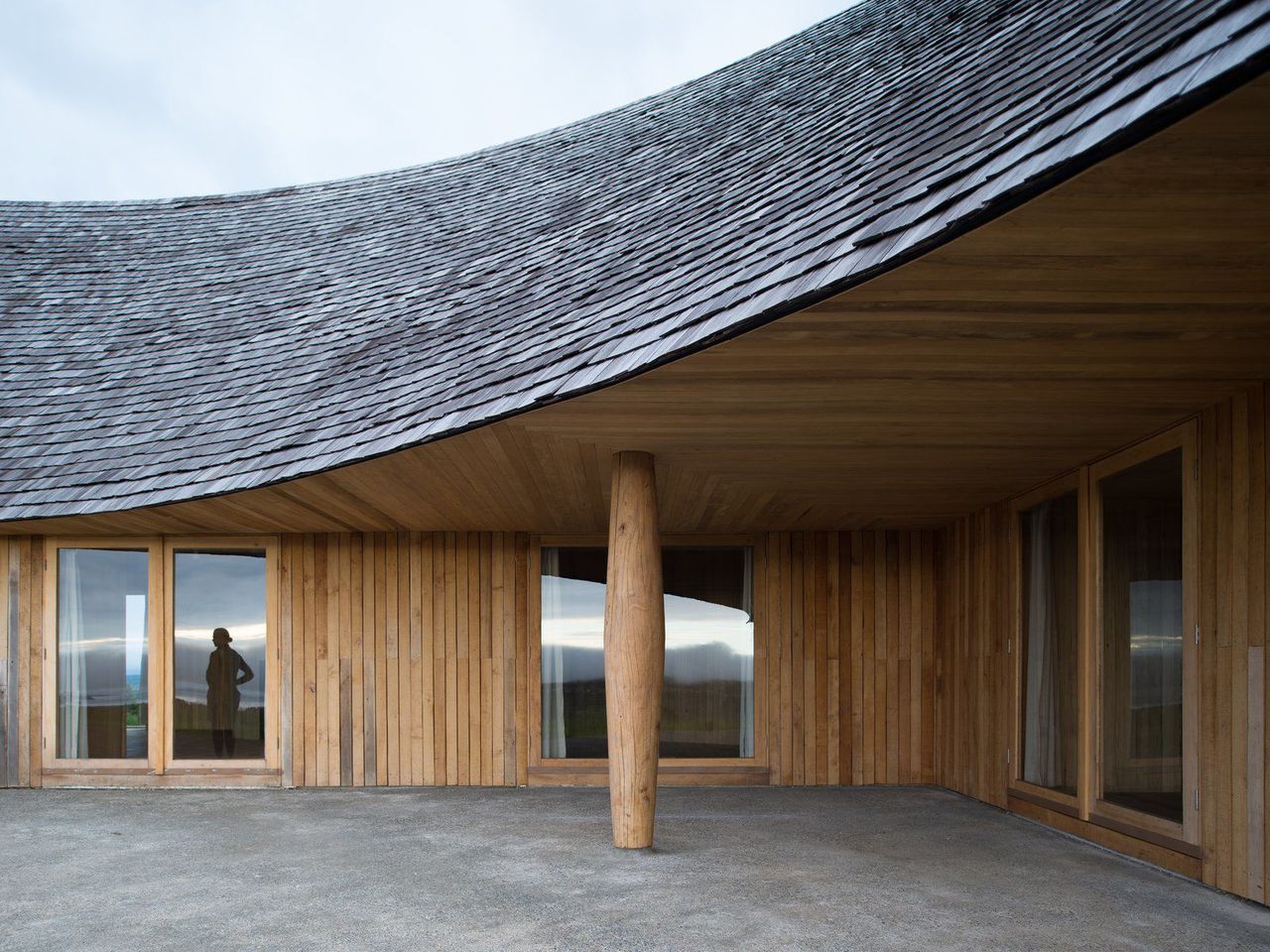 The sheltered corner of the courtyard provides an outdoor refuge.

Near the southern end of the house, two circular skylights perforate the curving ceiling to illuminate the living areas and one of the bedrooms. The interior floors, walls, and ceilings are also fitted with timber, which were installed by local carpenters from the area who are renowned for their boat-buildings skills. To maintain a minimalist aesthetic, all storage and appliances were incorporated into discreet units built along the interior walls.

A sweeping roof slopes steeply on one side. 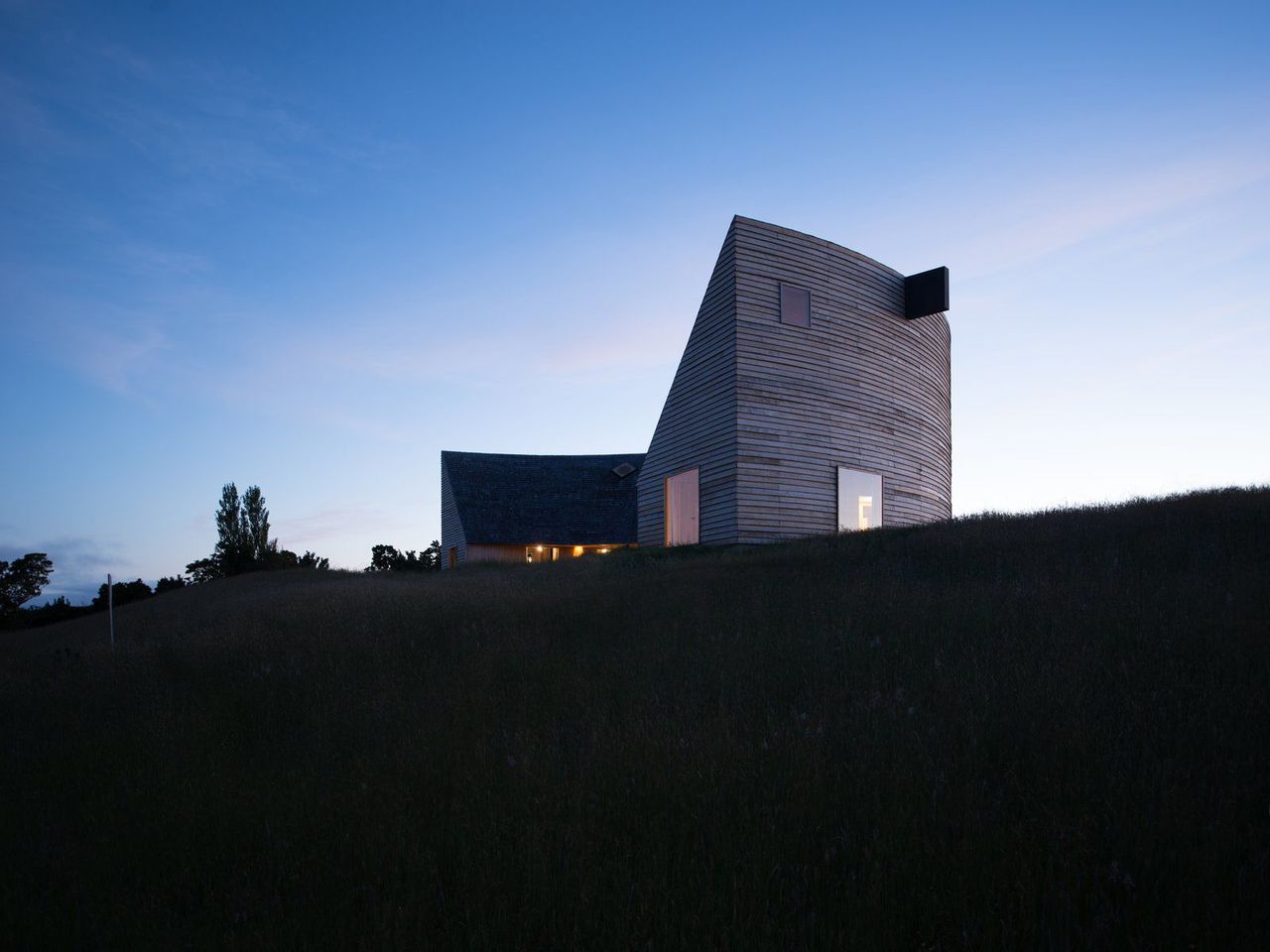 Rode House is located in the town Chonchi on the largest island in the Chiloé Archipelago. A model of Rode House by Pezo von Ellrichshausen Arquitectos