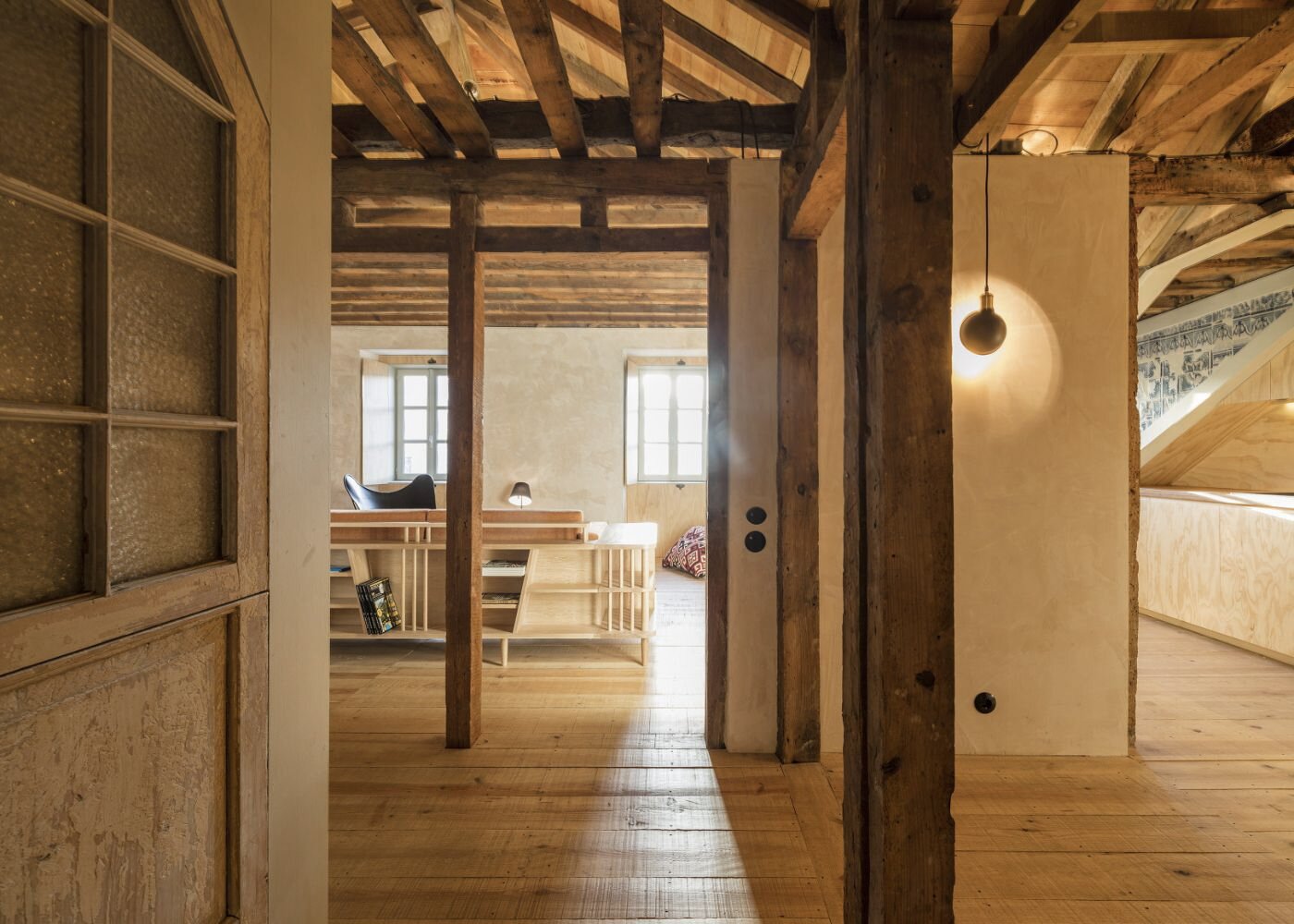 Perched on a steep hillside overlooking the port city, the wood-clad penthouse is steeped with period details and offers picturesque castle views.

A newly restored, three-bedroom home is now available in a historic pocket of Lisbon, Portugal. The bright and airy pied-à-terre sits on the top floor of a classic Pombaline-style building in the city’s downtown area, which was largely destroyed by a disastrous earthquake in 1755. 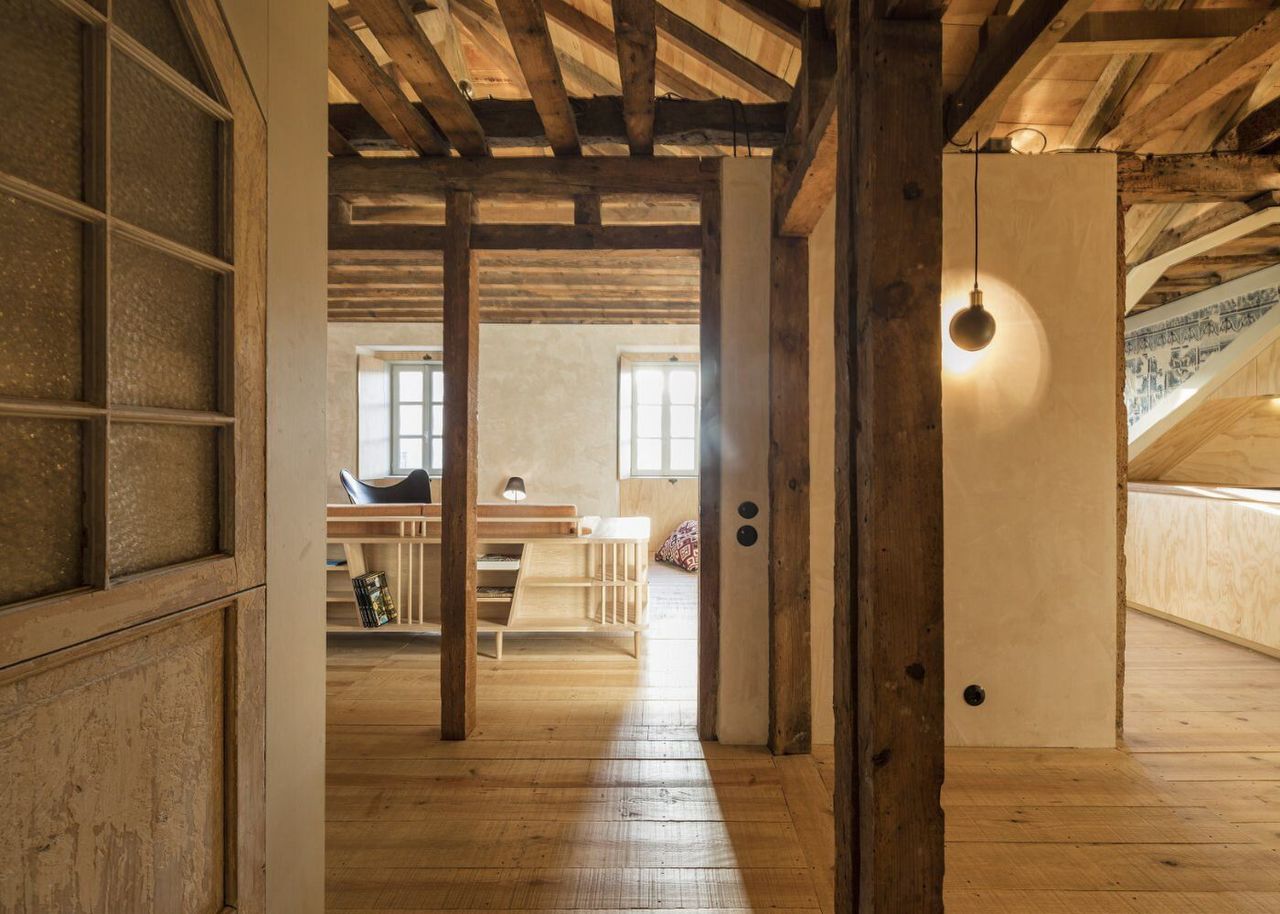 Tucked away on the top floor of a traditional Pombaline-style building, the 18th-century flat underwent a major restoration by CASCA, a Lisbon-based architecture firm.

After the city’s devastating earthquake, the 18th-century Marquis of Pombal ordered for Lisbon to be rebuilt with earthquake-resistant structures. These buildings pioneered the use of anti-seismic wooden beams and also offered a standardized, rapid construction process, which was used throughout Lisbon until 1920. Today, the Pombaline-style structures (also called Pombalino buildings) are considered to be lasting symbols of traditional Portuguese architectural style.

Lisbon-based architecture firm, CASCA, recently completed a careful remodel of a dilapidated dwelling within one of these buildings. The nearly 1,399-square-foot penthouse maintains much of the centuries-old detailing that defines Pombaline-style architecture. 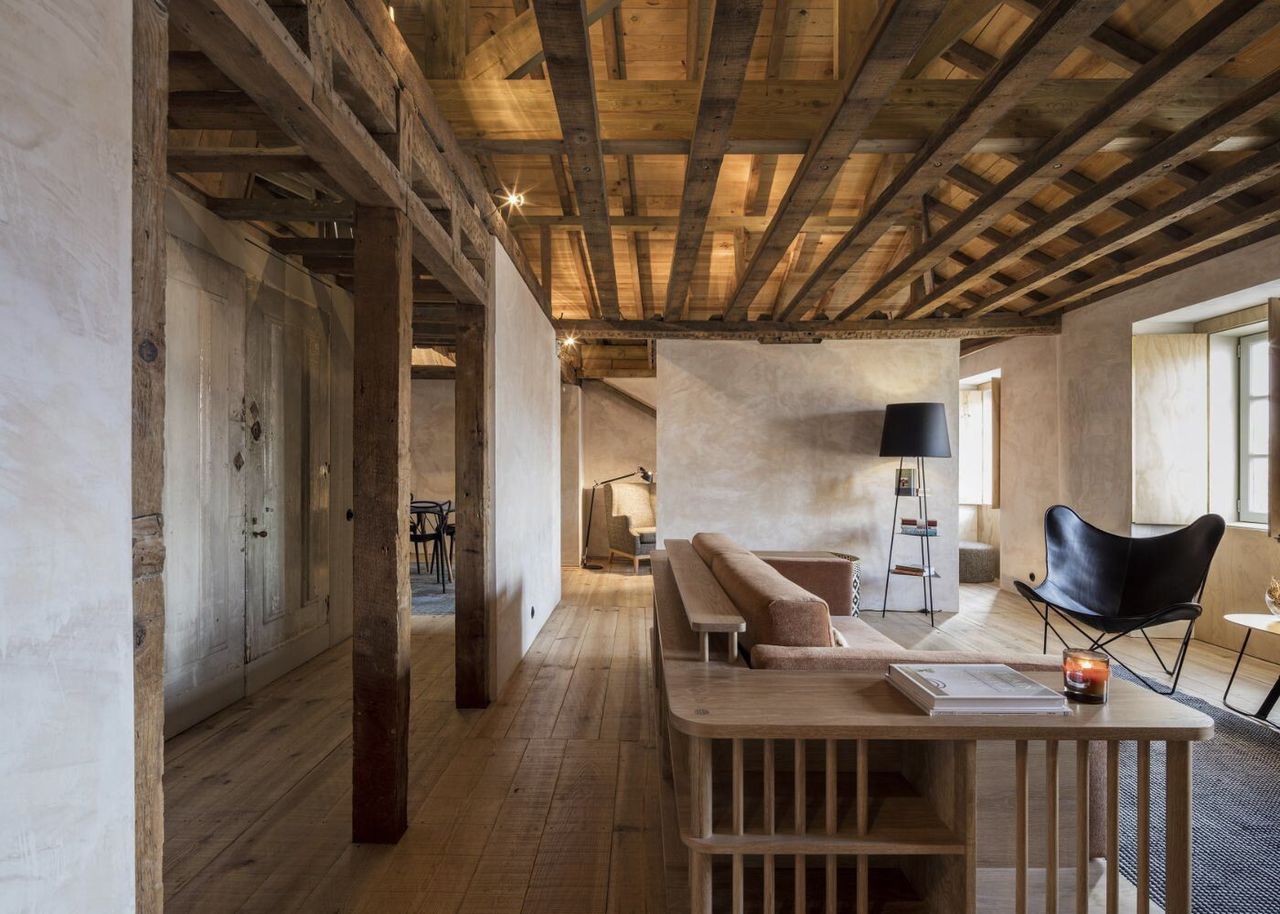 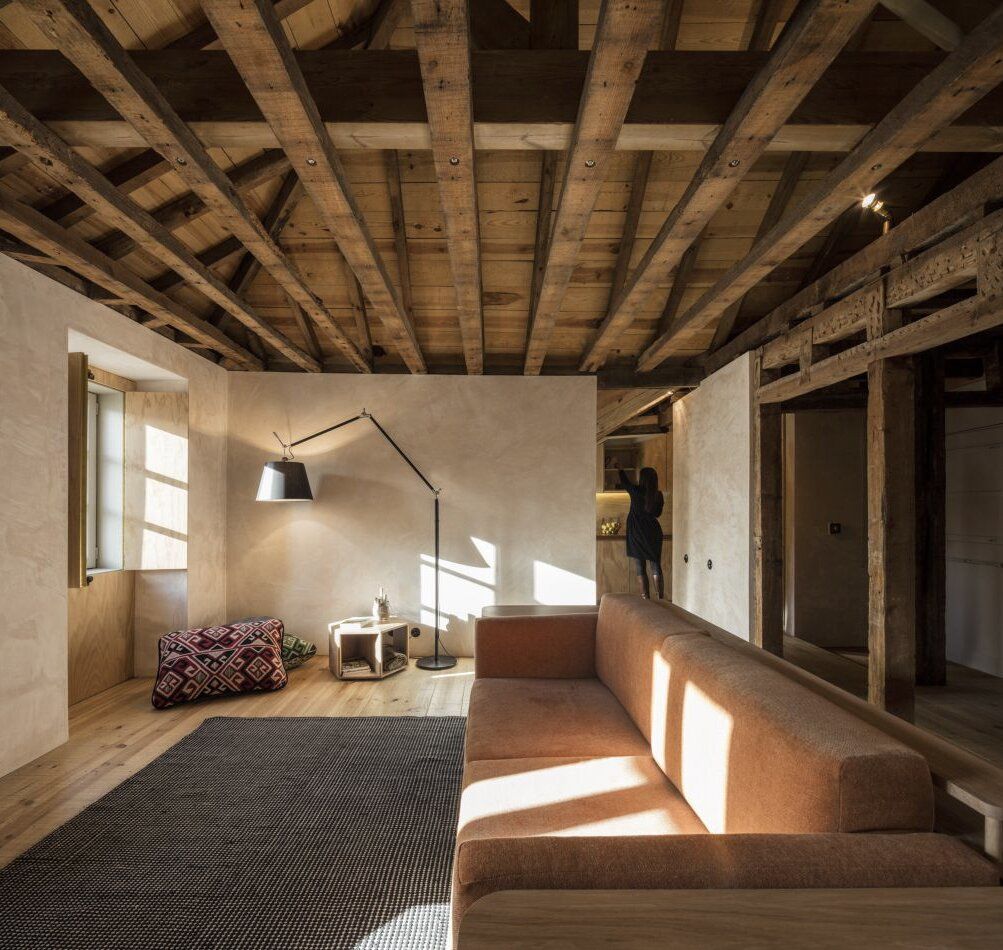 "We focused on what would be the least intrusive approach to support contemporary living," explains the firm. The architects removed a number of walls in the home to optimize the amount of light and space in the interior living areas.

Many of the home’s supporting wood beams had been poorly replaced or repaired, but the flat "preserved the original anti-seismic structure," notes the CASCA team. The architects were prepared for the renovation to be challenging, but quickly after they started the project, they encountered one of their biggest hurdles: figuring out how to redesign the layout without causing too much damage to the dwelling. 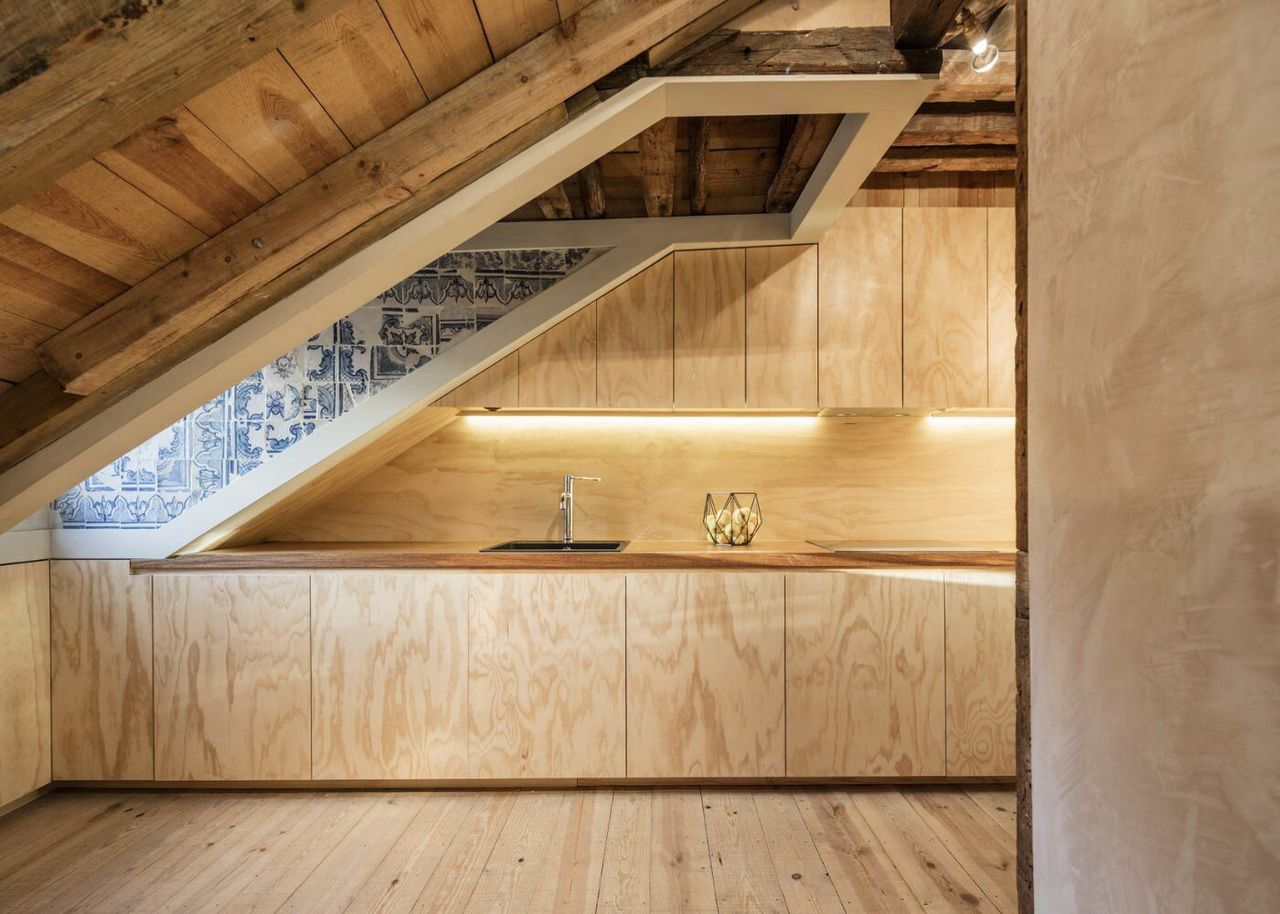 The updated kitchen features original Portuguese tiles that were collected from the original site. "Unique elements like these tiles are becoming rare. The few that remain carry the memory of a specific Lisbon era," says CASCA. 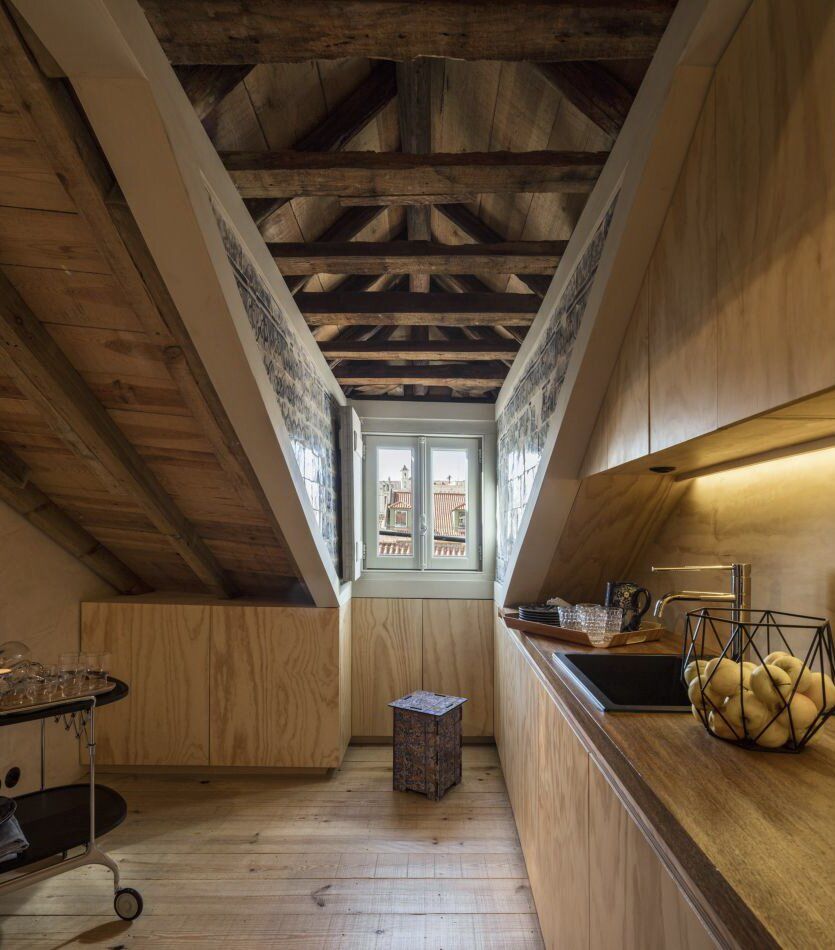 In the kitchen, patterned tiles from the original site surround a small window that frames views of Lisbon’s historic downtown district.

In addition to restoring the home’s structural details, the CASCA team also incorporated various period elements into the updated design. In the kitchen, the architects used a number of tiles that were found on the original site to decorate a small window that overlooks the city. "The Portuguese tiles were carefully collected, rearranged, and fit into the kitchen window, which was just the right size," the firm explains. "This window is the only space that features these tiles, which are among the most emblematic architectural features of the Pombaline style." 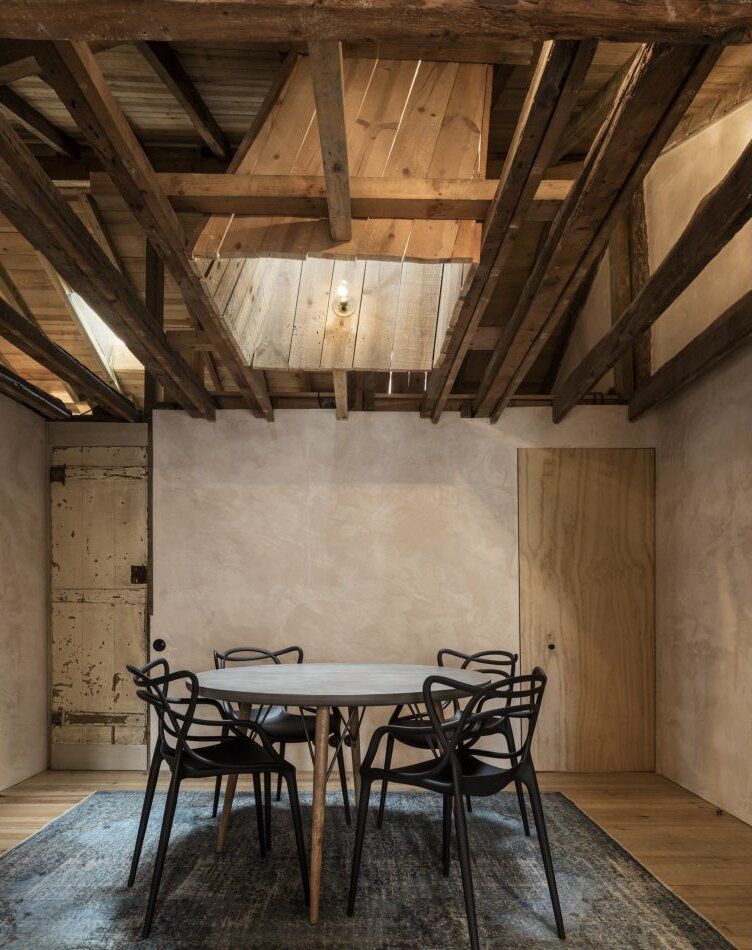 A skylight allows sunlight into the main dining area near the kitchen. The architects leveled the floors of the centuries-old residence-but as a result, the original doorways no longer fit. "Instead of cutting the doors to size, we relocated them to be used as cladding," the team states. These decorative doors now pay homage to the passing of time. 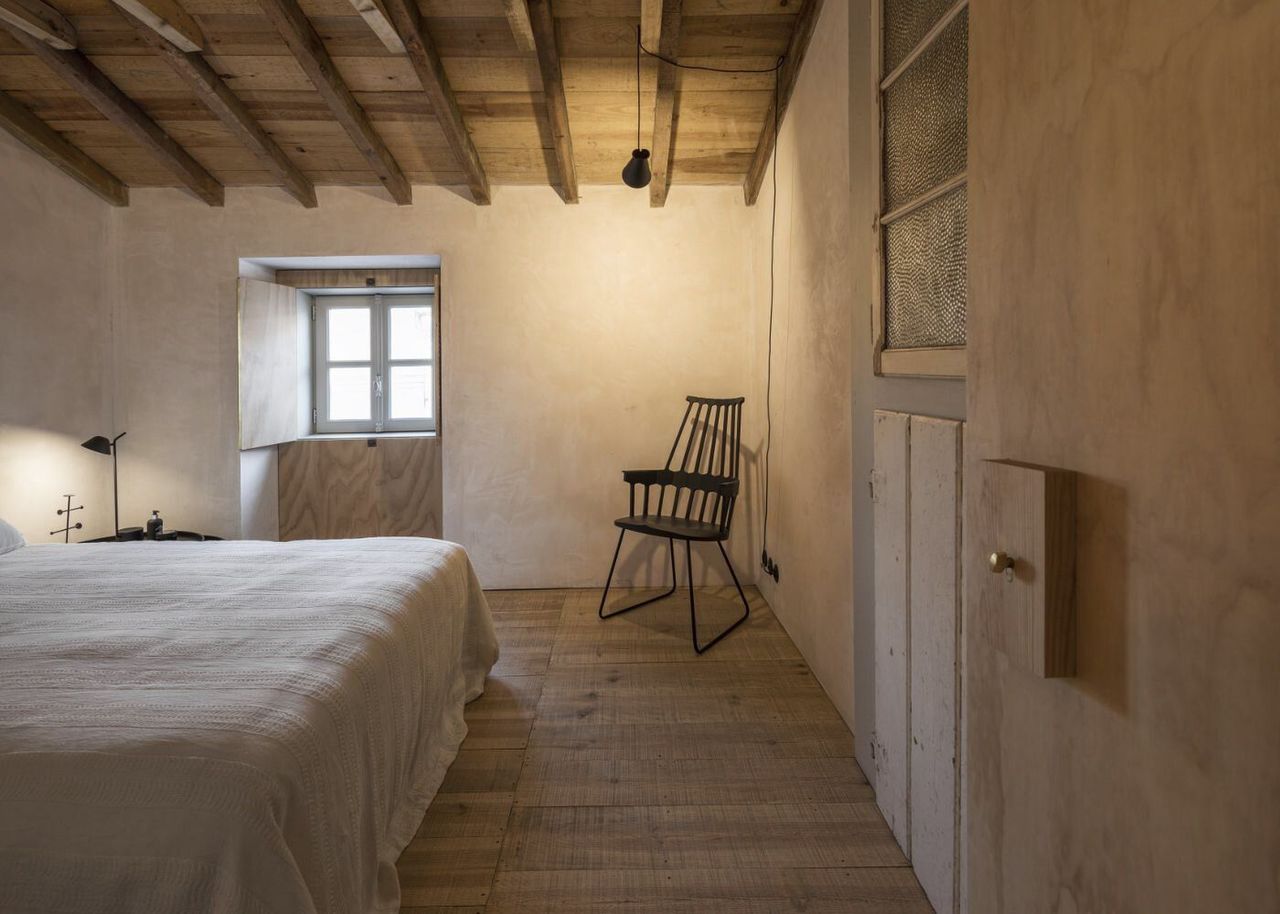 Each of the flat’s three bedrooms reflect a minimal aesthetic.

In total, the restored Lisbon flat offers three bedrooms and two bathrooms. There are also a number of spacious living areas, as well as a nearly 100-square-foot mezzanine. The home is located in Lisbon’s historic Baixa Pombalina area, just minutes from the Praça da Figueira (a central public square). Scroll ahead to see more of the renovated 18th-century penthouse. 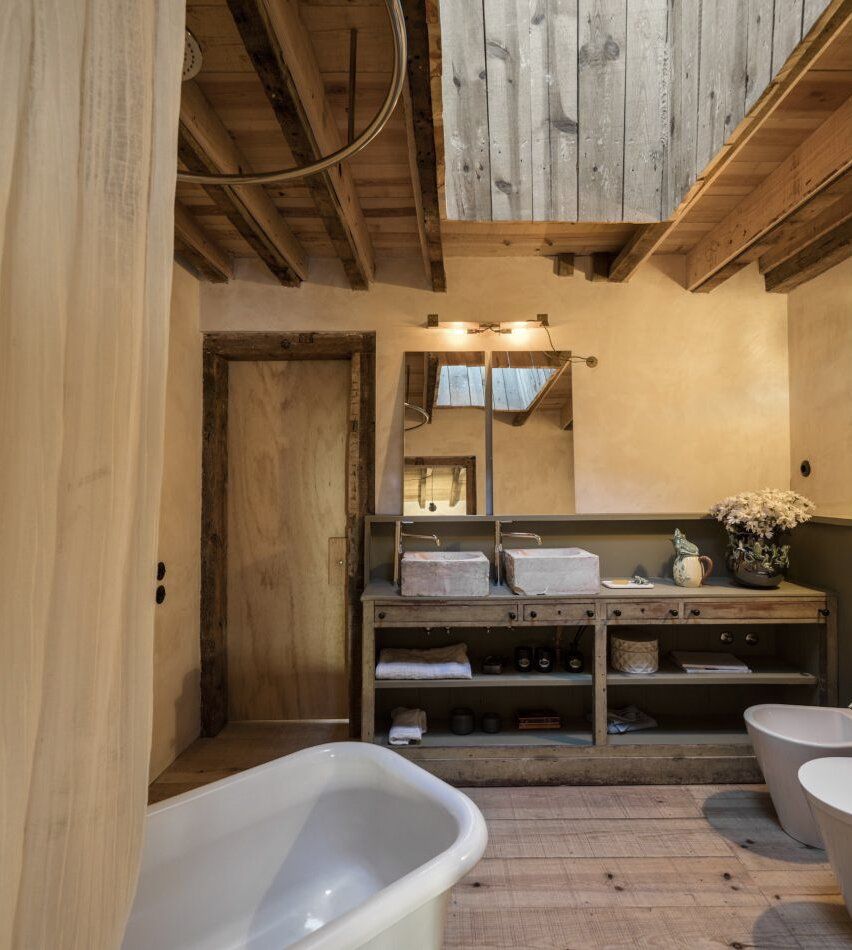 The principal bathroom offers a soaking tub and double vanity. 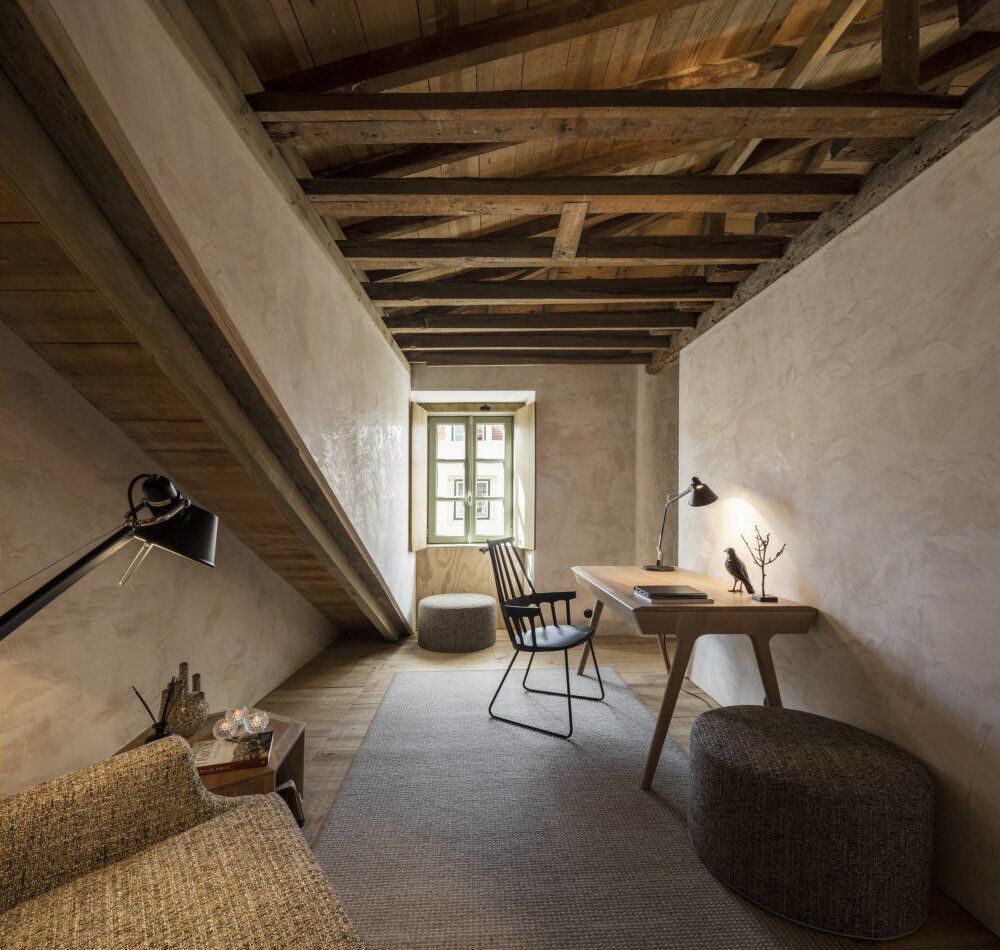 A quiet office with a reading area is located just off the main living room. 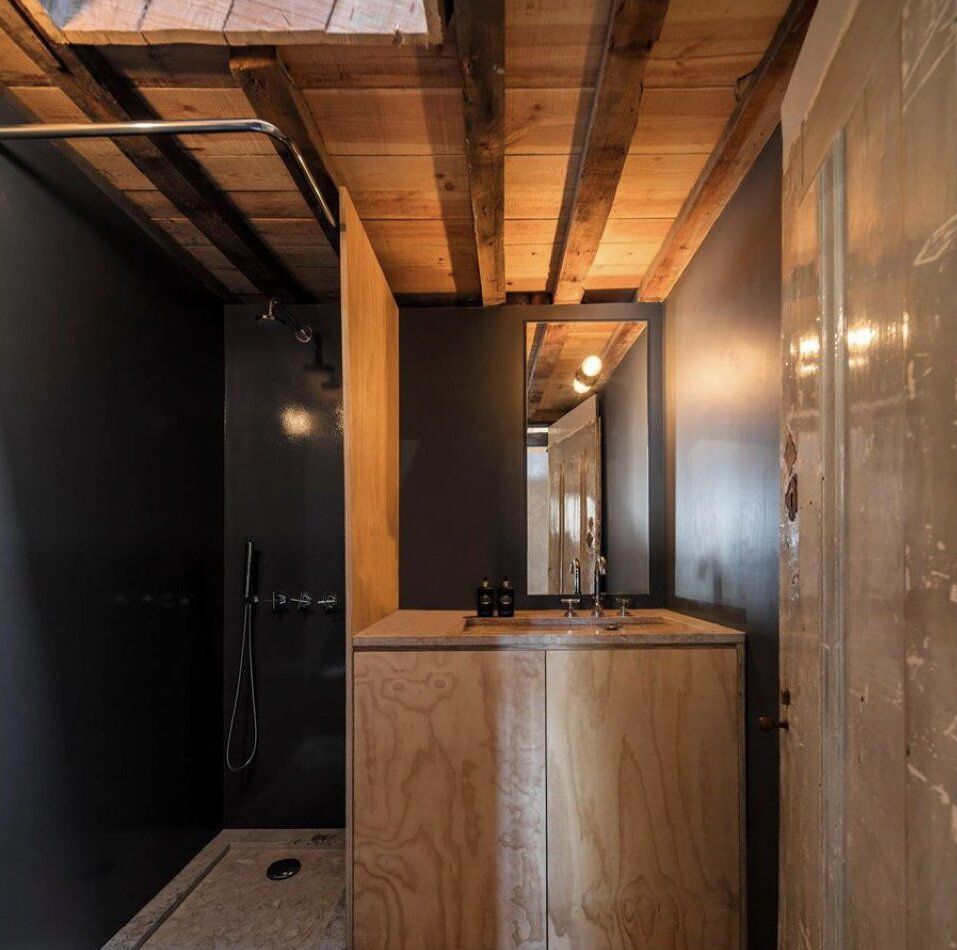 The second bathroom features an oversized shower and is connected to one of the bedrooms. 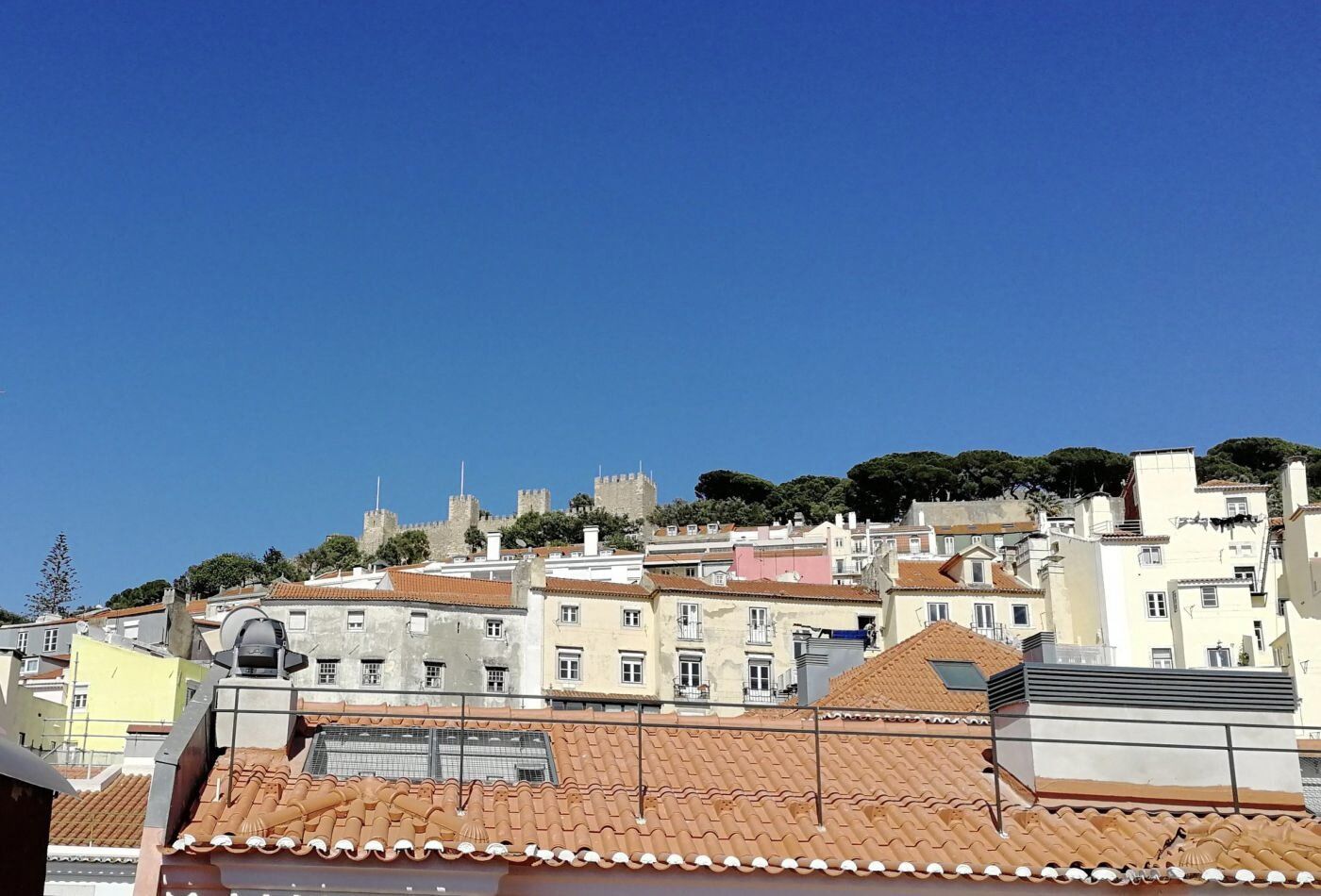