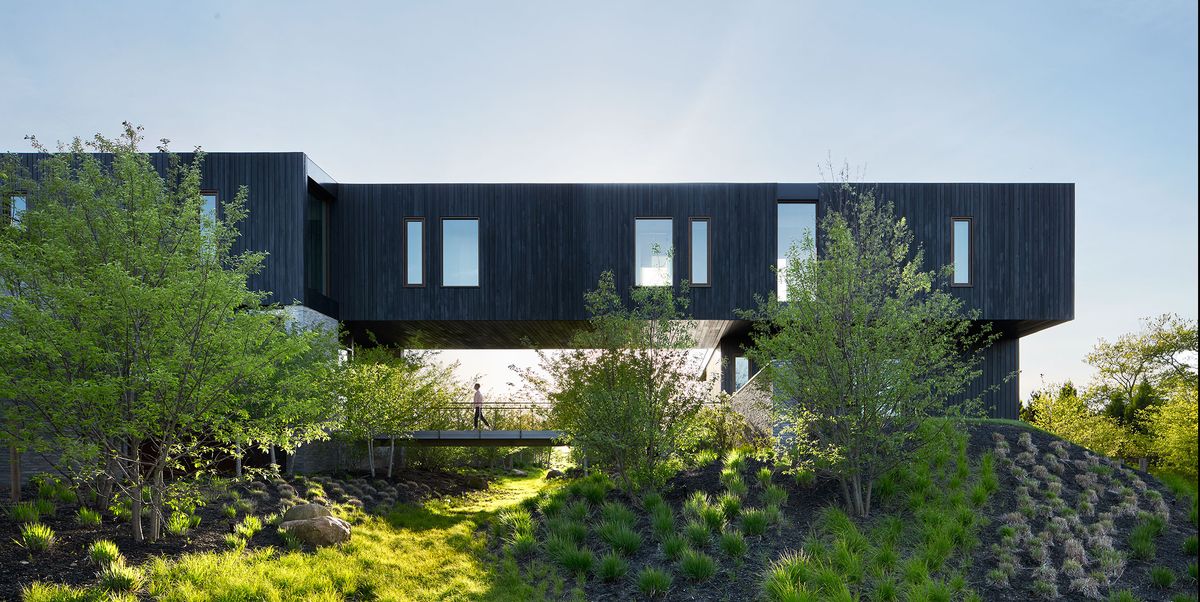 When Daryl Simon and her husband, Irwin, purchased a rare piece of land in Bridgehampton, New York, for a weekend and summer home, they were clear on one thing: They didn’t want a traditional Hamptons beach house. There would be no homage to the Shingle Style’s steeply peaked rooflines, no Colonial Revival for the 21st century, and no corporate swaths of glass. 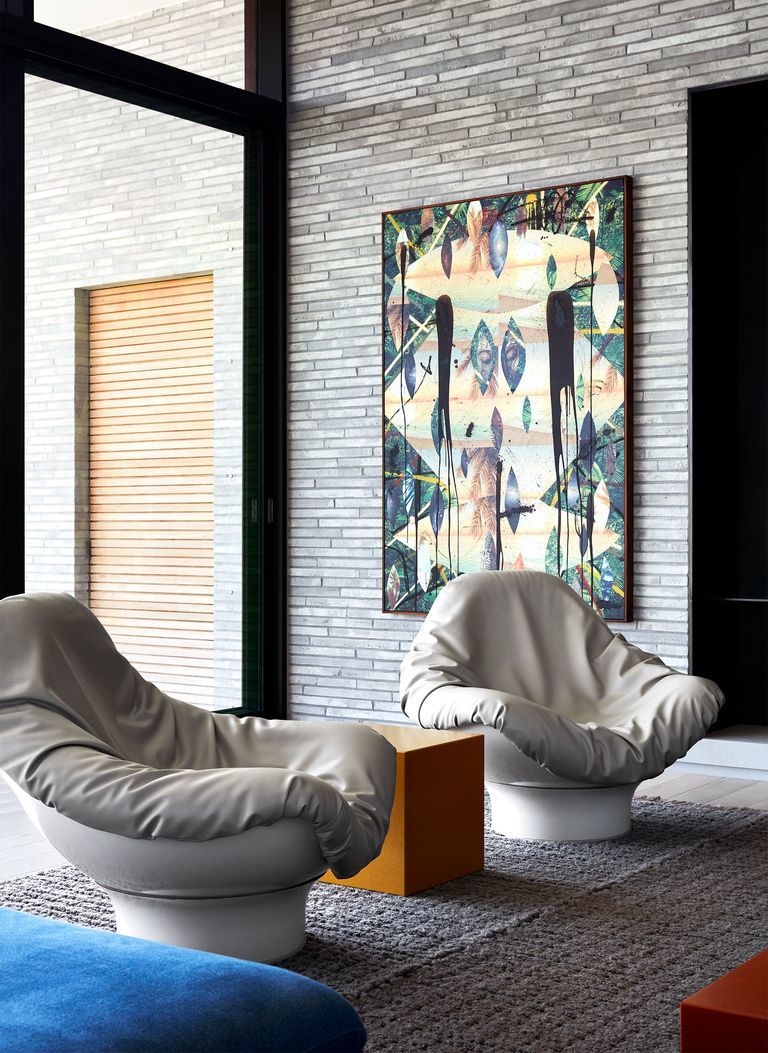 In the family room, the vintage Mario Brunu lounge chairs are covered in a Holly Hunt fabric, and the custom side table is by TUW Designs. The walls are made of Kolumba brick from Petersen Tegl, the custom rug is by Mourne Textiles, and the artwork is by Rashid Johnson.

Instead, for the 10 acres located between deeded farmland and Sagaponack Pond, the Simons recruited an unusual team: Architecture Plus Information (A+I), known for creating tech offices with a humanist touch, and designer Poonam Khanna, an architect by training whose ELLE DECOR A-List studio, Unionworks, has been quietly running on word-of-mouth commissions since its founding in 2007. Based in Brooklyn and Philadelphia, Khanna was born in Chandigarh, India; she began her career in the public sector and pivoted to designing luxury interiors for private residences, hospitality, retail brands, and offices. Her collaboration with A+I-and LaGuardia Design Group, who contributed landscaping-resulted in a house as surprising as its team. “Grey Gardens, it ain’t,” says Brad Zizmor, one of A+I’s two cofounders. 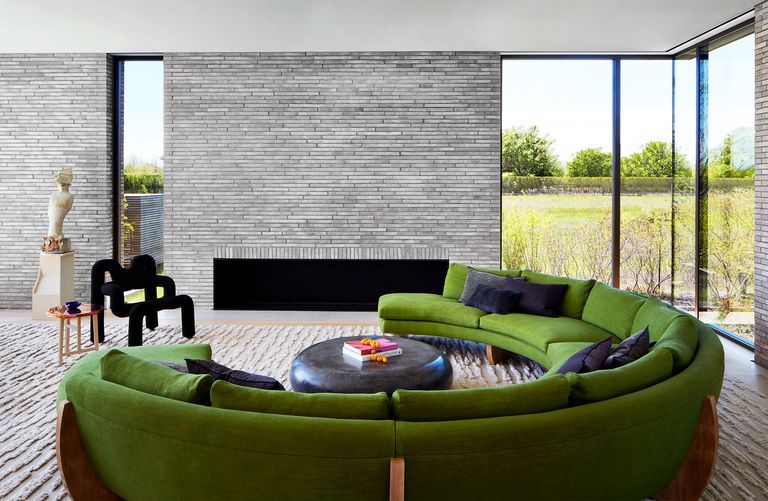 In the living room, the custom TUW Designs circular sofa is in a Pierre Frey linen, the vintage Terje Ekstrom chair is from Eclectic-20, the cocktail table is by McCollin Bryan, and the copper side table is by Neri & Hu. The sculpture is by Derek Weisberg, and the custom rug is by Vanderhurd.

The Simons had already tested A+I’s mold-breaking abilities when they hired the firm to design the Long Island headquarters for Hain Celestial, Irwin’s former food company. Given the Simons’ background in organic products and sustainability, it was key that this new project was deferential to the landscape. “You really see a change of seasons in the house,” says Daryl. “Poonam and A+I allowed a lot of ‘Oh, wow’ moments.”

With four children and a love of entertaining, the Simons also wanted a residence where nothing was too precious. Friends and kids would be tramping through for meals, playing basketball on the court adjacent to the entry, and trekking to and from the infinity pool. 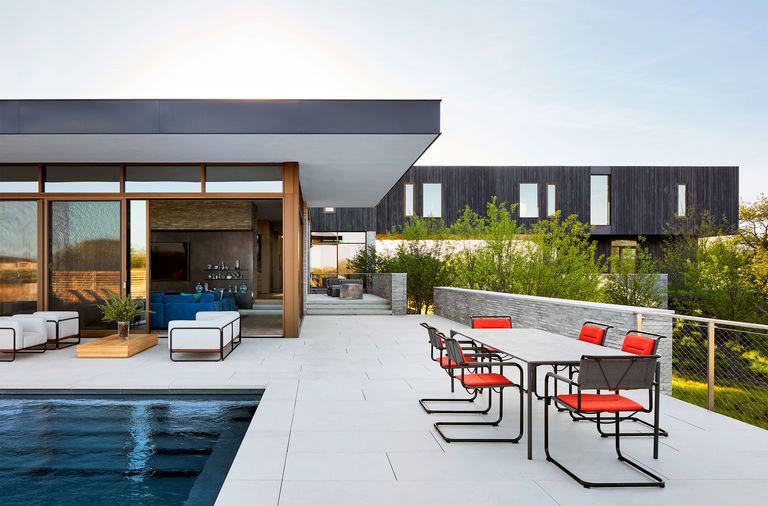 The patio table is from Paola Lenti.

A+I’s first bold choice was to clad the structure’s three rectangular volumes in charcoal-stained, quartersawn wood, and Khanna agreed. “I was really obsessed with this house being black so that it didn’t stand out in the landscape,” she said, though she admits that this sounds contradictory. “You don’t see the lower volumes, you just see the dark bar that floats across.”

Sandy-colored brick walls add warmth and richness to the dark exterior, bisecting the house, running perpendicular to the pond and farm; this materiality is carried through in the interiors, easing the transition between inside and out. And after a number of massing studies, A+I decided to separate the guest wing from the family’s main spaces, straddling the two volumes over a bioswale and connecting them with a bridging second story. A lower, exterior bridge connects the ground floors of the two structures and floats 12 feet above native grasses, Pennsylvania sedge, and small, multi-trunked trees. 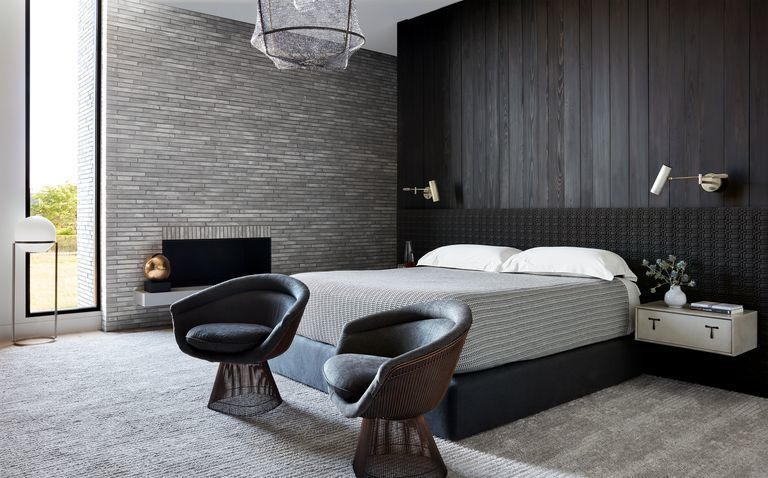 In the home’s primary bedroom, the custom bed is in a Pierre Frey fabric and dressed with sheets from Matteo and a blanket from Coyuchi. The floating nightstands are by BDDW, and the Warren Platner lounge chairs are vintage. The sconces are by Apparatus, the pendant light is from Ay Illuminate, the carpet is by Vanderhurd, and the gold sculpture is by Camille Henrot.

A simple promenade, with rooms that flow linearly, serves as a canvas for Khanna’s playful palette and design concept. This light touch also lets the Simons’ bold art collection shine. To complement it, Khanna anchored each room with sculptural furniture and kept the pieces to a minimum. Large, bright sectionals are the centerpieces of the main gathering spaces; for the family room, she chose a welcoming Zanotta Pianoalto sectional in cerulean by Ludovica + Roberto Palomba that gestures to the pond. In the more formal living room, a custom C-shaped grass-green sofa provides the only color, nodding to the farm views. 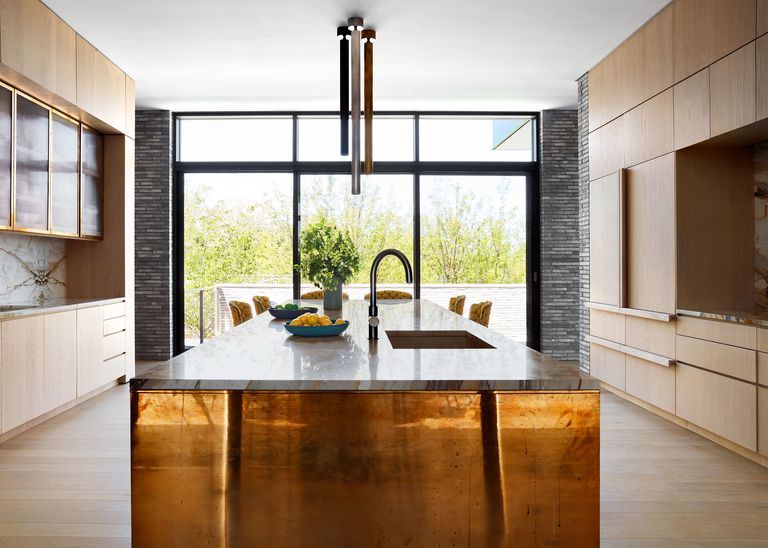 The kitchen’s custom island is clad in a brass finish that is left to patina over time and topped with a counter in Calacatta marble. The island fittings are by Grohe, and the pendants are by Apparatus.

Khanna’s sprightly choices extend to the dining room, which she designed around a large Thomas Struth photograph of a lush jungle. Bringing her clients back to earth, she upholstered the backs of the Formstelle dining chairs with a Memphis-like fabric that evokes a city skyline. And in another unexpected move, the main focus of the Simons’ kitchen is a monumental brass island with a copper finish meant to patina over time, fingerprints and all. Khanna has instructed the Simons not to polish it: Its variegated and smudged rosy glow serves as a symbol of the house itself-adored and used by many. 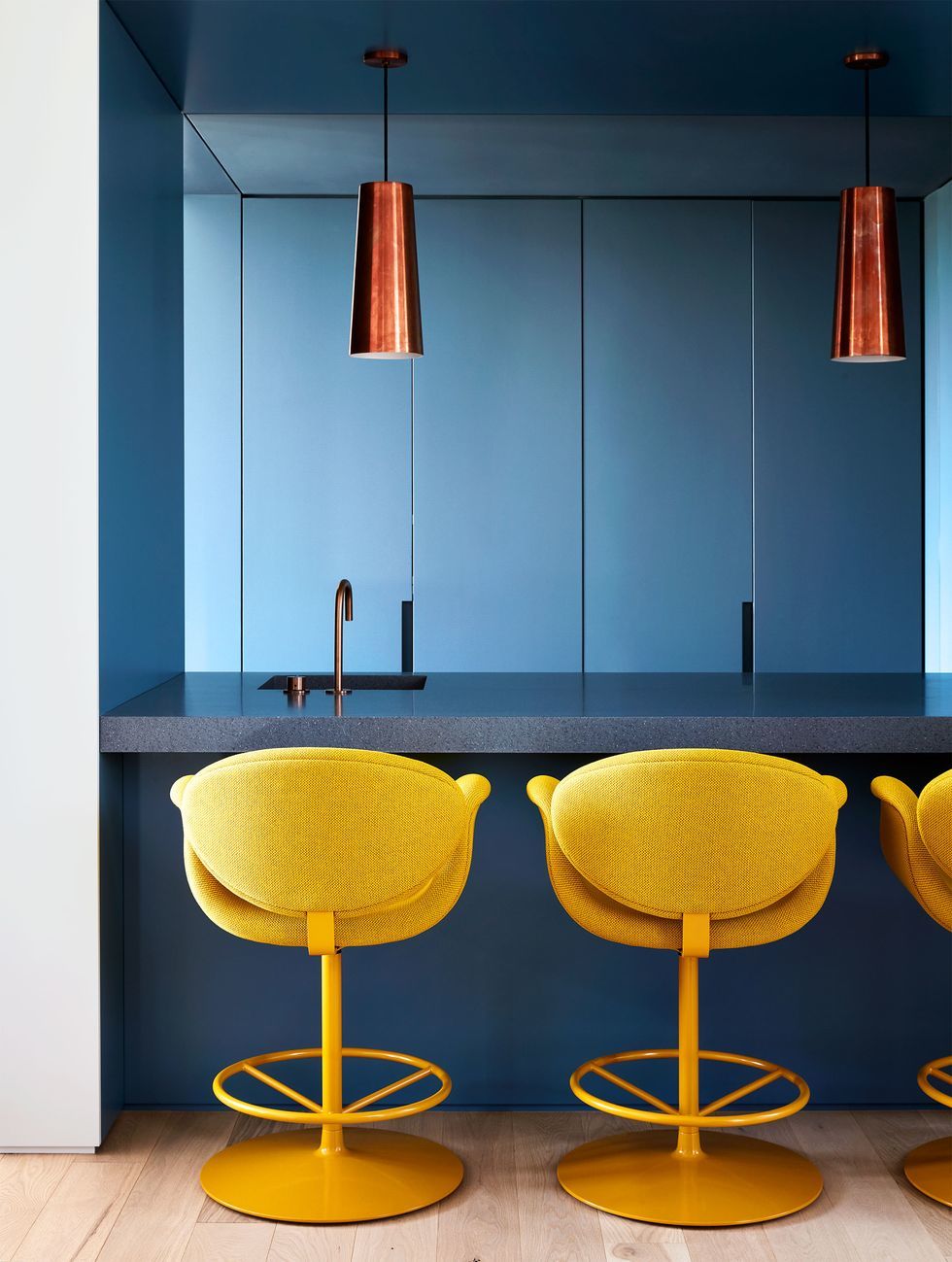 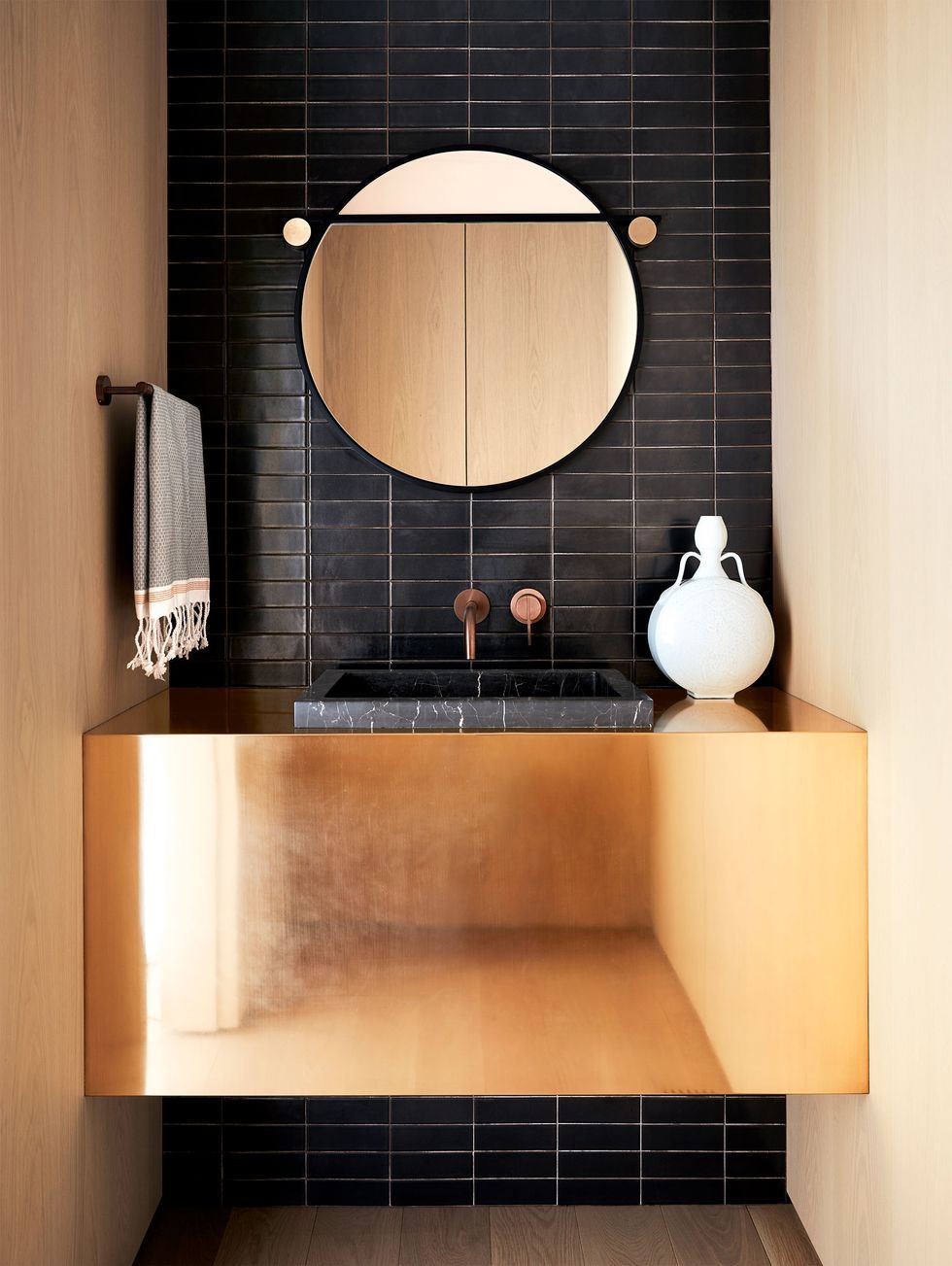