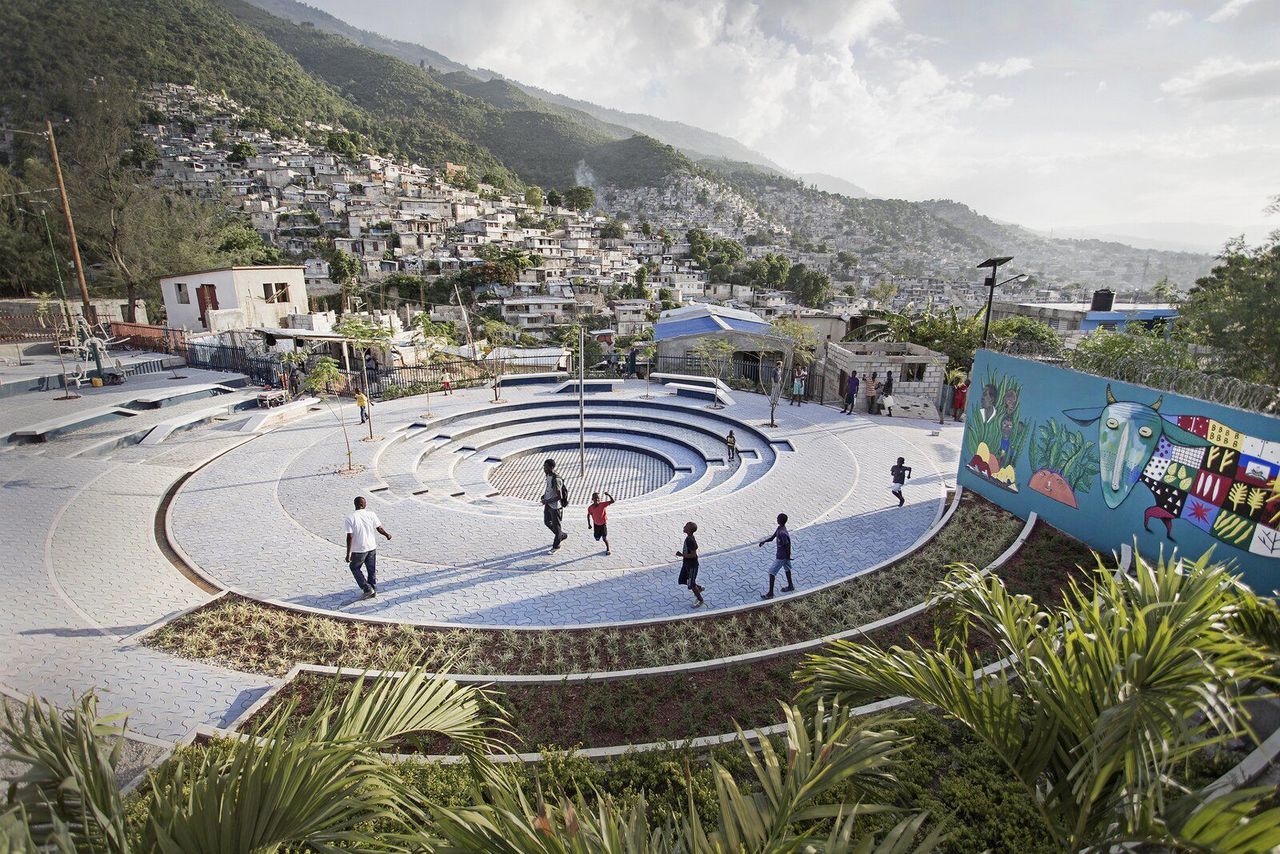 Presented in “The Ideal City,” a new book by IKEA’s design lab, these ideas by leading architects give us the blueprint for better living.

The perfect city doesn’t exist. The hypothetical apex is even hard to imagine. But The Ideal City, a new book by IKEA’s design and research lab, SPACE10, and published by Gestalten, scours the world to outline its core attributes: a city that is resourceful, accessible, shared, safe, and desirable. By providing examples ranging from affordable and sustainable starter homes in New Orleans, to a community library built of responsibly sourced in Indonesia, to a waste-to-energy power plant in Denmark, The Ideal City shows us how small-scale solutions can have universal effects. Read on for a look at just a few of the projects from the book, available to preorder and to be released March 10.

A Park That Acts as a Sponge in Northern China 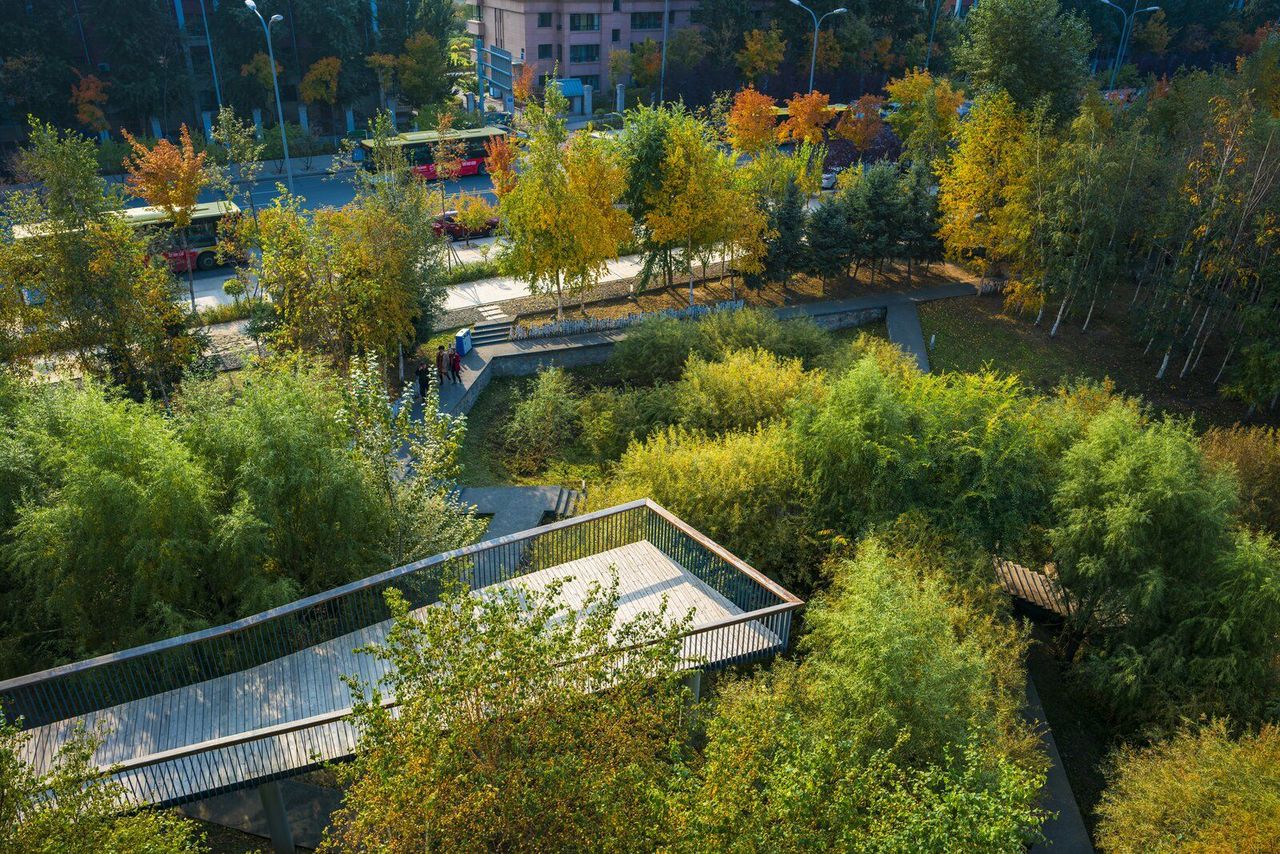 When architecture firm Turenscape was approached to help revive a failing wetland at the center of Qunli, a new urban district in northern China, the firm’s response was to use the project to solve another of the city’s problems—namely, its inability to cope with the stormwater that frequently caused flooding and waterlogging in the summer months. The urban development surrounding the area had cut off the wetland from its water sources, causing the ecosystems to disappear. Turenscape devised a solution to both problems by surrounding the wetland area with an outer ring of mounds and ponds, which act as a filtration and cleansing zone for stormwater collected from the urban area. The water can then be stored and released into the wetland as necessary. Taking the Qunli Stormwater Park one step further, the architects introduced new ways to bring local residents closer to nature, including building a network of paths that wind around the ring of ponds and a skywalk that provides stunning views across the open landscape. 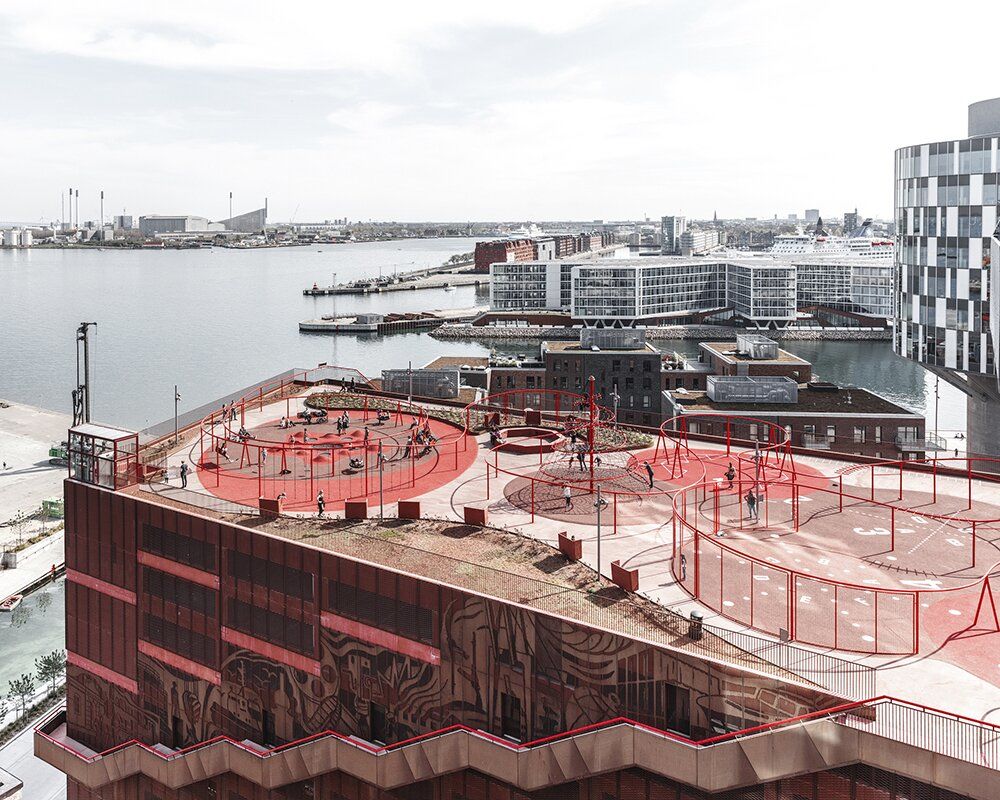 This playful design explores the ways in which the parking garage-a staple of every urban environment-can take on additional characteristics and functions in order to make it an attractive and beneficial place to spend time. For this parking garage in Nordhaven-a port area in Copenhagen earmarked for rejuvenation-JAJA Architects devise a scheme that hinged almost entirely on a handrail dubbed the "red thread." This guiding rail starts at street level, continues along a staircase of the building, and leads to the most fantastic playground on the roof. Here, the red thread loops into spirals and twirls across the roof, framing swing sets, monkey bards, and jungle gyms in its path, before descending back to street level via a second staircase on the opposite side of the building. The plant boxes, situated in a grid-like rhythm, enliven the facade with greenery. Although the design is unconventional, the structure is red in recognition of the historic red brick harbor buildings in the area. Also dubbed the Park 'n' Play, this project proves that even the most mundane infrastructure can add practical whimsy to our cities.

A Regional Market Built of Recycled Materials in Niger 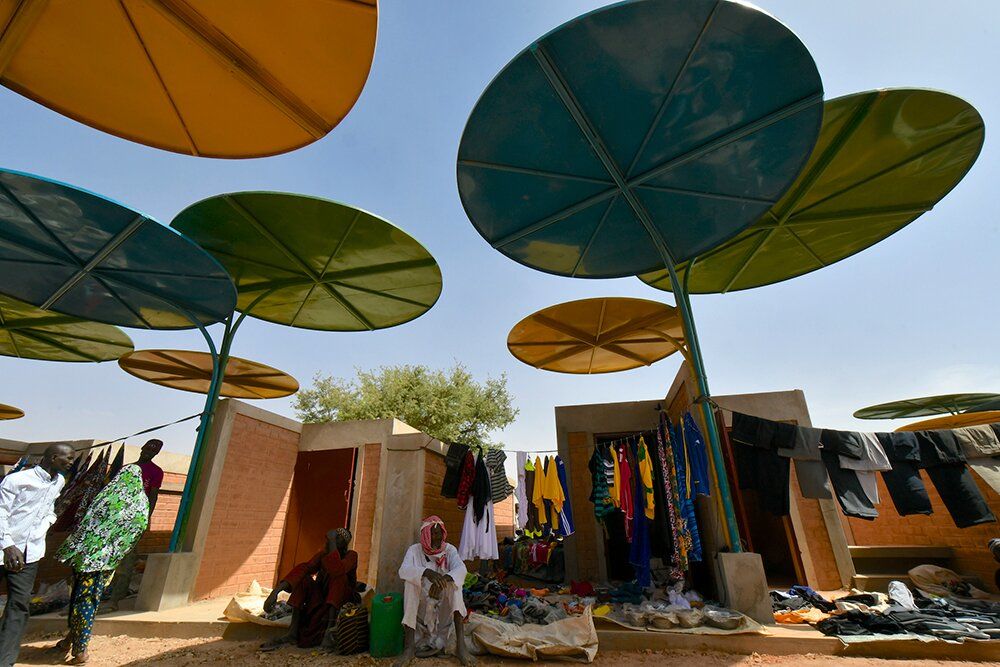 While much of rural African life revolves around weekly trading gatherings, the economy of individual villages can barely survive. Atelier Masomi hopes to change this with a design that could, if emulated across the region, give communities in an arid landscape short on natural resources a much-needed economic boost and a sense of pride. The architecture firm built a permanent regional market in the village of Dandji with canopies made of cheap and recycled materials that now operates daily instead of weekly. Adapting the regions’s traditional market typology of adobe posts and reed roofs, the design uses compressed earth bricks and metal in a durable, quirky, and visually striking manner. It is also incredibly practical. Colorful, recycled metal disks provide shade usually cast by trees in less severe climates, while arranging them at different levels ensures good ventilation. The compressed earth bricks used for the stalls have similar cooling advantages of the more traditional adobe, but at a fraction of the cost. Bringing this dramatic upgrade to the village infrastructure full circle, the site is centered around an ancestral tree with landscaping that encourages newcomers to gather and sit with the local villagers, increasing interaction socially as well as economically.

A Waste-to-Energy Plant and Green Space in Copenhagen 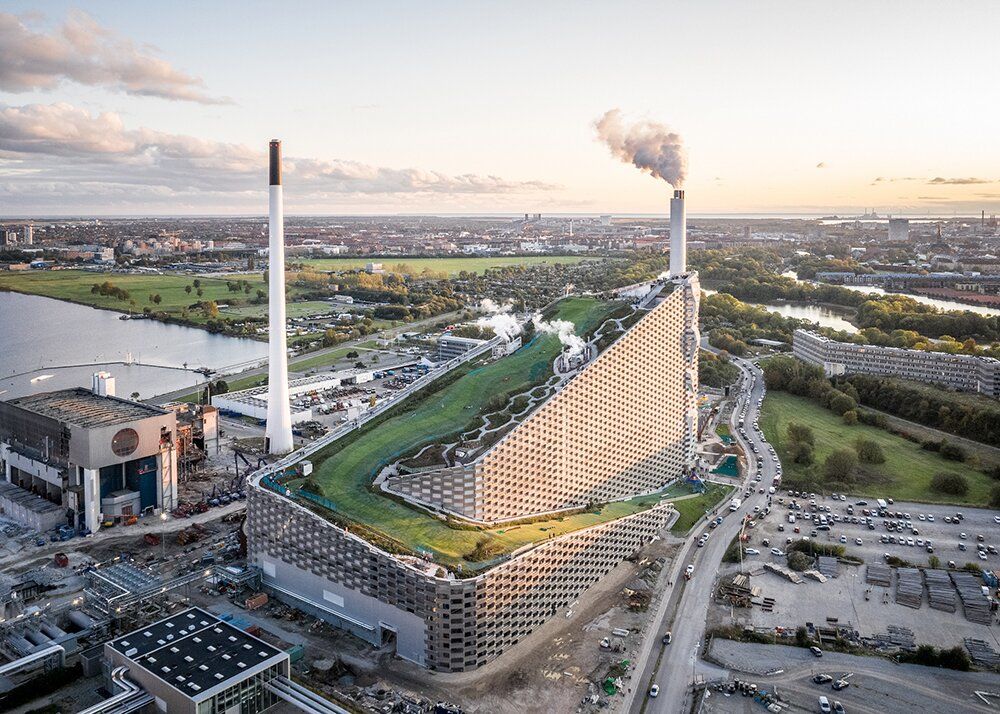 Topped by hiking paths and an artificial ski slope, the Amager Resource Center-also knowns as CopenHill-cuts a mountainous shape out of Copenhagen’s flat landscape. "It's a cogeneration plant that produces district heating and electricity, and it’s essentially the cleanest waste-to-energy power plant in the world," says architect Bjarke Ingels. "We turned the building mass of this gigantic facility into a man-made mountain, complete with climbing walls and ski slopes. It’s social infrastructure-literally, it’s a piece of infrastructure-that is made so that it also has positive social side effects. Because we can see that when a power plant gets decommissioned, it can become the Tate Modern in London, or when train tracks get decommissioned, they can become the Highline in New York." 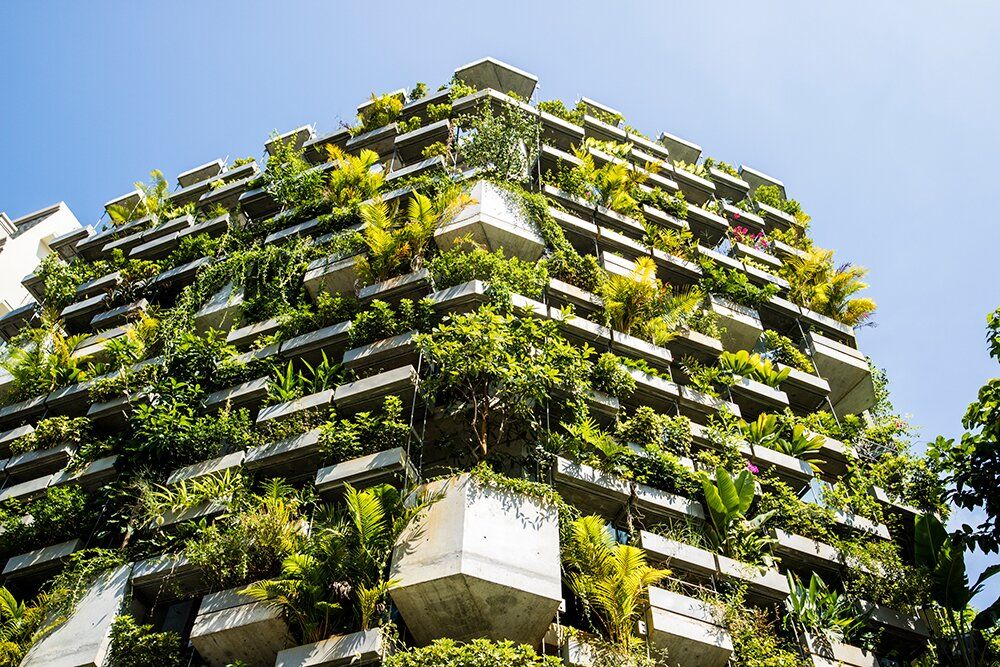 Increasingly, architects are turning to planting schemes to reintroduce greenery to the urban landscape. This is particularly the case in cities that have undergone rapid urbanization, where a lack of green space has resulted in pollution, heat-island effects, and a loss of connection with nature for residents. In Ho Chi Minh City, VTN Architects wanted to redress the balance with its Urban Farming Office, essentially an office building clad in hanging planter boxes filled with local vegetation. Acting as a vertical farm, not only does it provide safe food and a green outlook, it also creates a micro-climate throughout the building. Irrigated with stored rainwater, the vegetation filters direct sunlight entering the building and purifies the air. Meanwhile, evaporation cools the air and small openings in the facade enhance cross ventilation. This green approach provides a comfortable environment with minimum energy consumption, thus contributing to the sustainable future of the city. 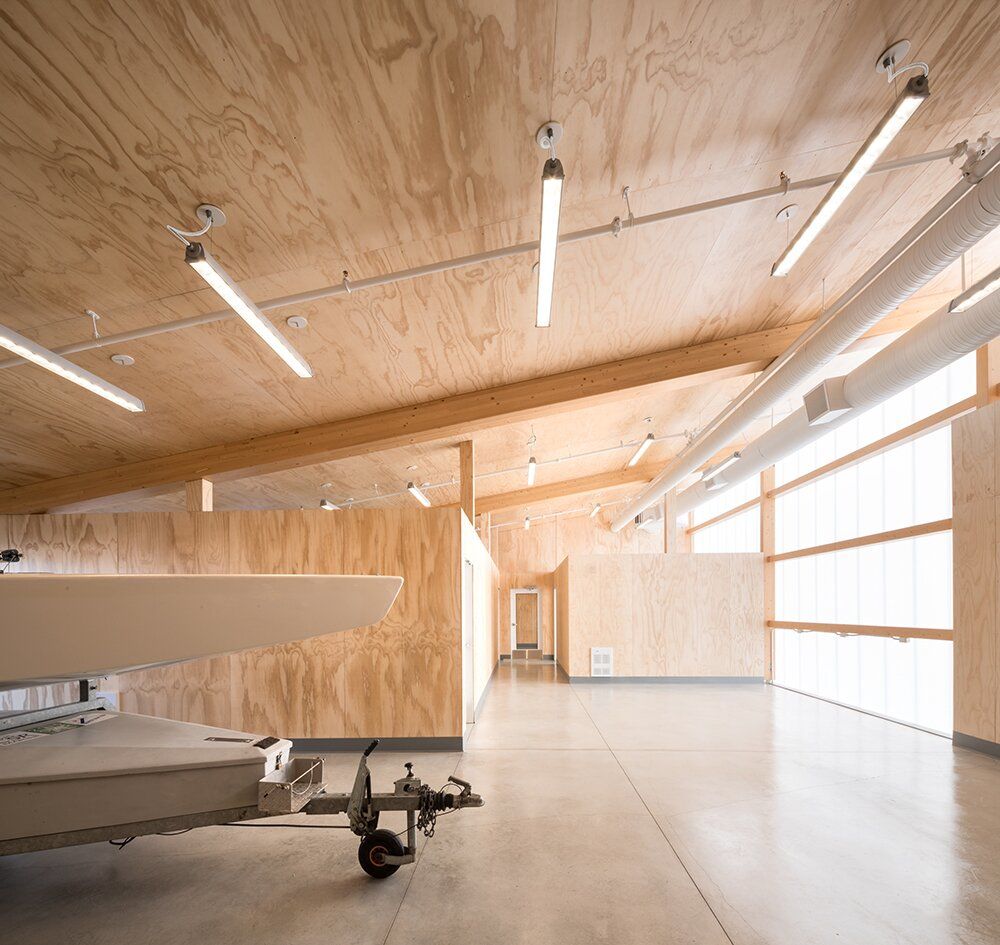 A boat barn by architect and mass timber proponent Michael Green implements construction-grade plywood to create a strong structural foundation. It stands as just one example of Green’s belief in wood as the answer to building a more sustainable future. "Cities will become healthier places when we choose to work in natural materials such as wood," explains Green, who lectures internationally on the subject. Green is a world leader in the design of mass timber structures, and perhaps one of the most humble architects in the business.

A Community Park in Port-au-Prince 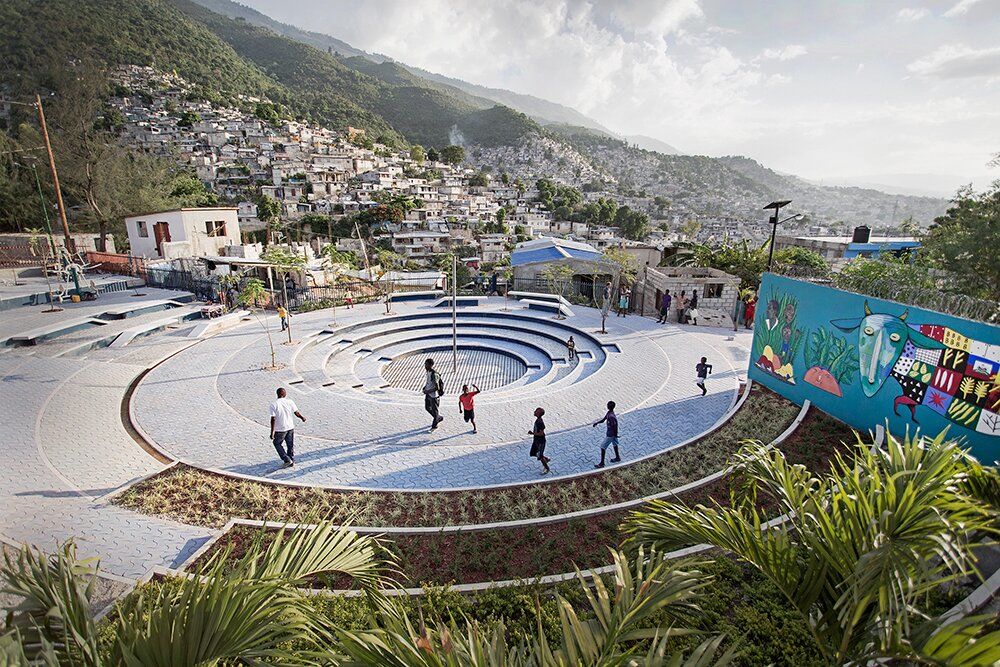 Perched on top of a hill in Port-au-Prince’s Carrefour-Feuilles neighborhood, Tapis Rouge is one of several public spaces built under the LAMIKA program, funded by the American Red Cross and implemented by the non-profit Global Communities. The acronym LAMIKA stands for "a better life in my neighborhood" in Haitian Creole, and one of the program’s aims is to create safer and cleaner environments. With community engagement at the core of the design process, EVA Studio created an amphitheater for community gatherings. Seating, exercise equipment, and terraces of indigenous plants occupy additional concentric rings, while palm trees conceal water storage tanks for a well, located 300 feet below ground. All the revenue generated from the water sales is reinvested into maintaining the space. The wall that runs along the perimeter of the site is painted with colorful murals by local artists and community members, while solar lights allow children, women, and the elderly to move through the settlement safely. Life is precarious in Carrefour-Feuilles, which suffered extensive damage in the 2010 earthquake. The settlement still has discontinuous access to electricity and running water, and people’s homes remain vulnerable. And yet this simple public space provides something tangible for the community to share and nurture.