We’re often saying that small cabins are super nice and cozy and that’s due to not only their size but also the fact that cabins are usually surrounded by beautiful nature and made out of wood. But how small is too small when it comes to a cabin.

There’s no real limit and there’s a bunch of cool projects that push the limits and inspire us to come up with original designs of our own. The following cabins are small and intriguing and we’re going to have a closer look at their unique designs in just a moment. This small cabin from Beijing, China sits in a wooded area at the foot of Mount Wuling. It’s been designed by Wee Studio and completed in 2016. What’s interesting about it is that it’s not just a single structure but two separate ones for a total of 8 square meters.

One section serves as a bathroom and the other is a multifunctional space that serves as a tearoom during the day and a bedroom at night. It has a nice view of the forest and the cliffs which can be admired through the large window. There’s also a skylight on the sloping ceiling which brings additional natural light inside and makes this small space feel larger and brighter. The main structure of the two cabin sections has a steel frame with a layer of thermal insulation which ensures that this is a warm and cozy space throughout the year including during winter.

The facades are built out of recycled wood panels and that helps the cabin as a whole blend into the surroundings and coordinate seamlessly with nature and the landscape around it. Given the remote location and a variety of other factors, this was all prefabricated in a factory and then transported and assembled on site. {Photographs: Dai Haifei}. 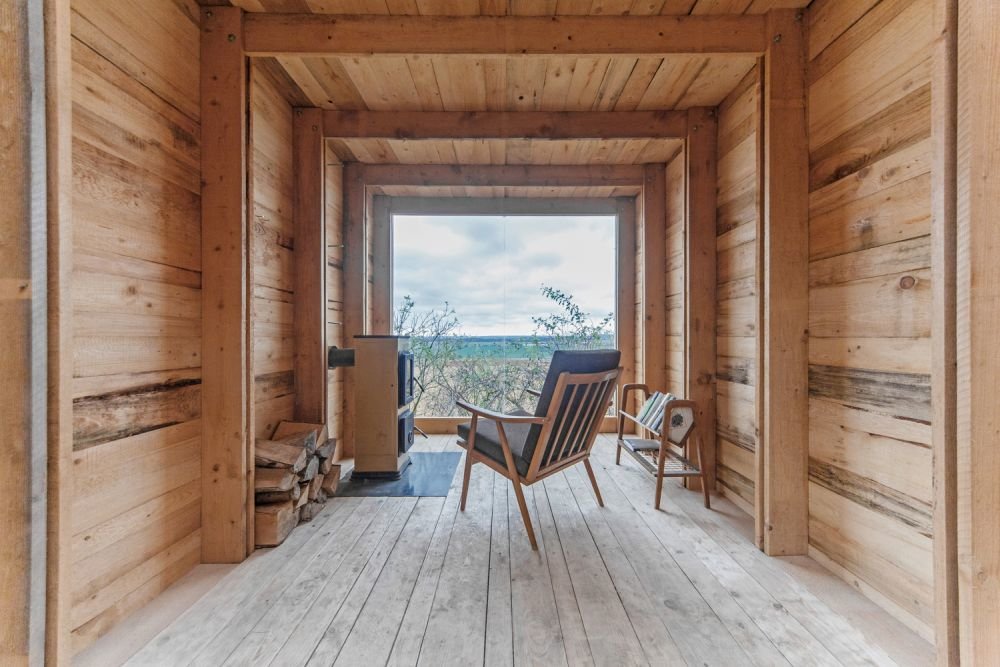 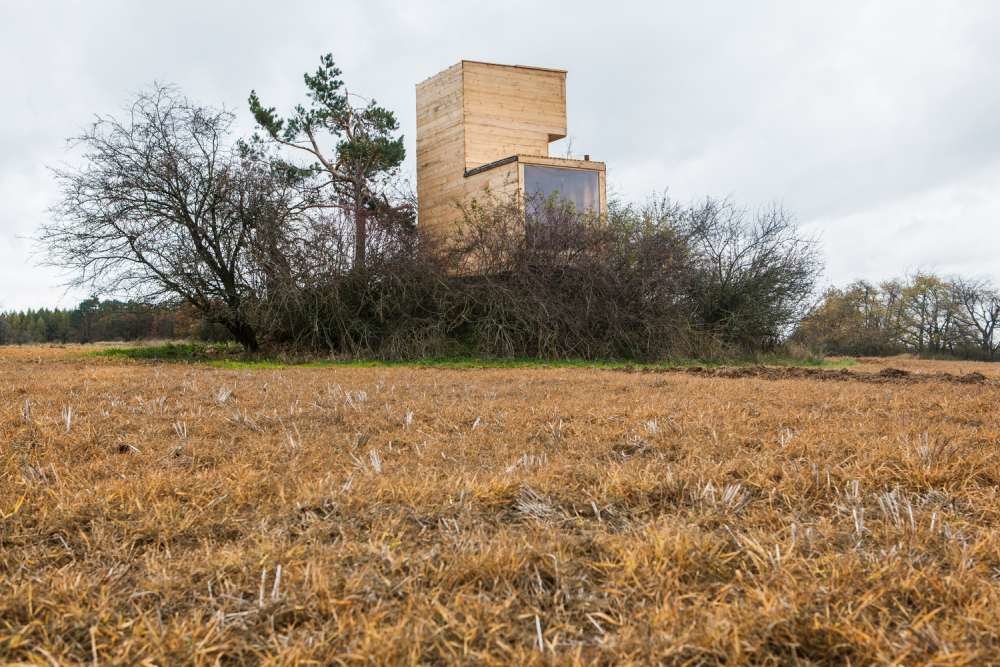 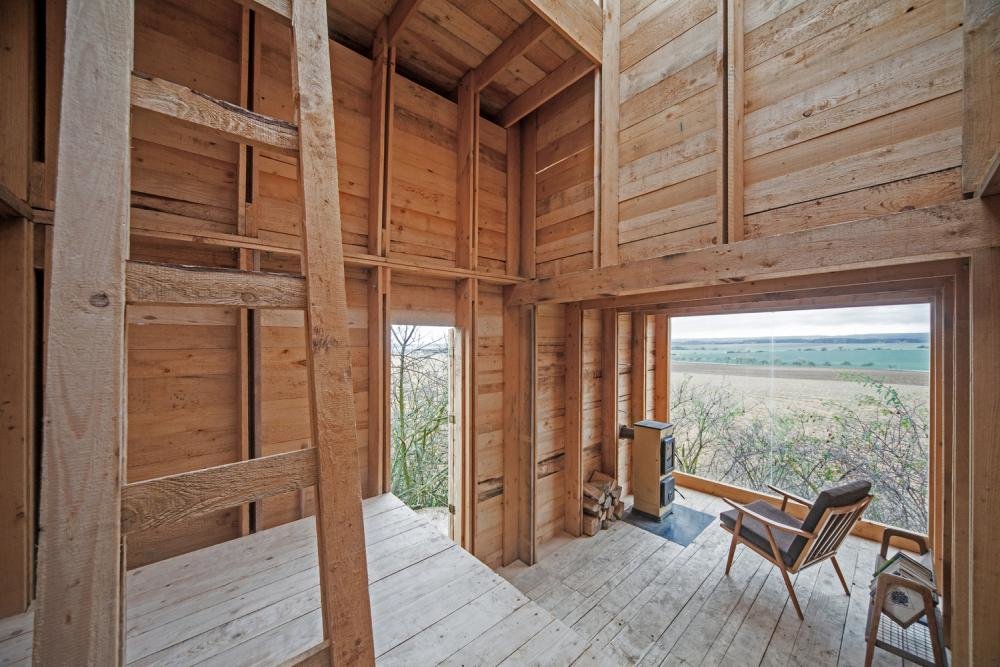 You don’t usually see cabins that rise above the landscape in the way this one does. This is something designed by Jan Tyrpekl, a small cabin built on top of a former concrete bunker. It’s located in the Czech Republic and the bunker has been there since before WWII but never used.

This wooden cabin takes advantage of it and uses it as a base structure. It’s only a 12 square meter structure but it’s quite tall and dominates the landscape around it. It has two large windows that overlook the border with Austria and a church as well as a skylight that brings in an abundance of natural light. 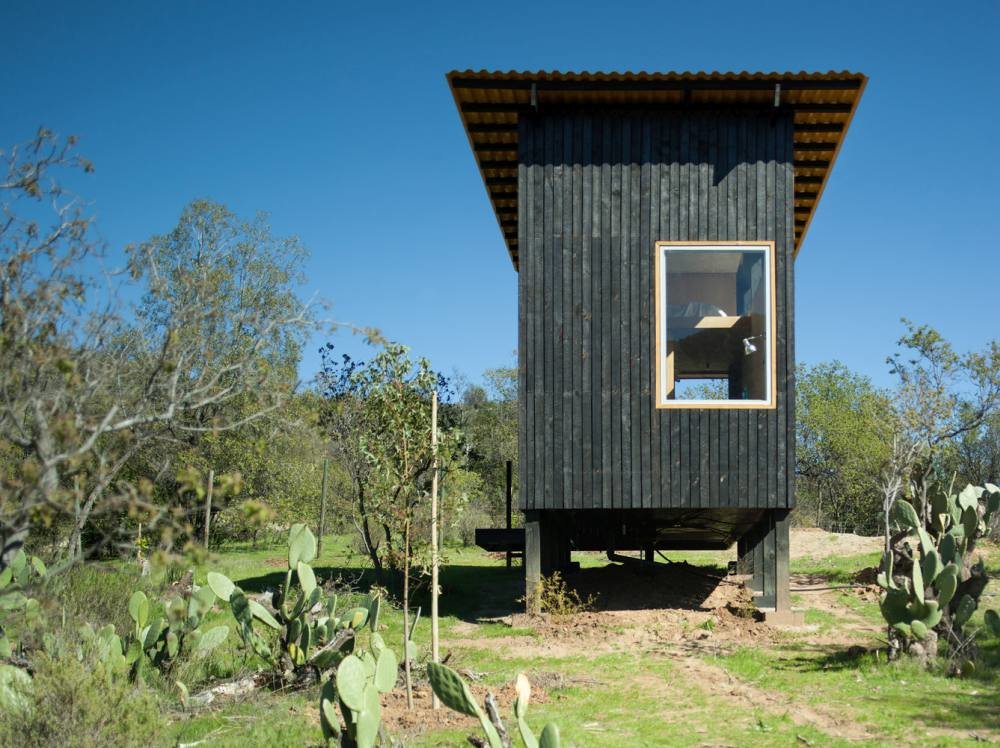 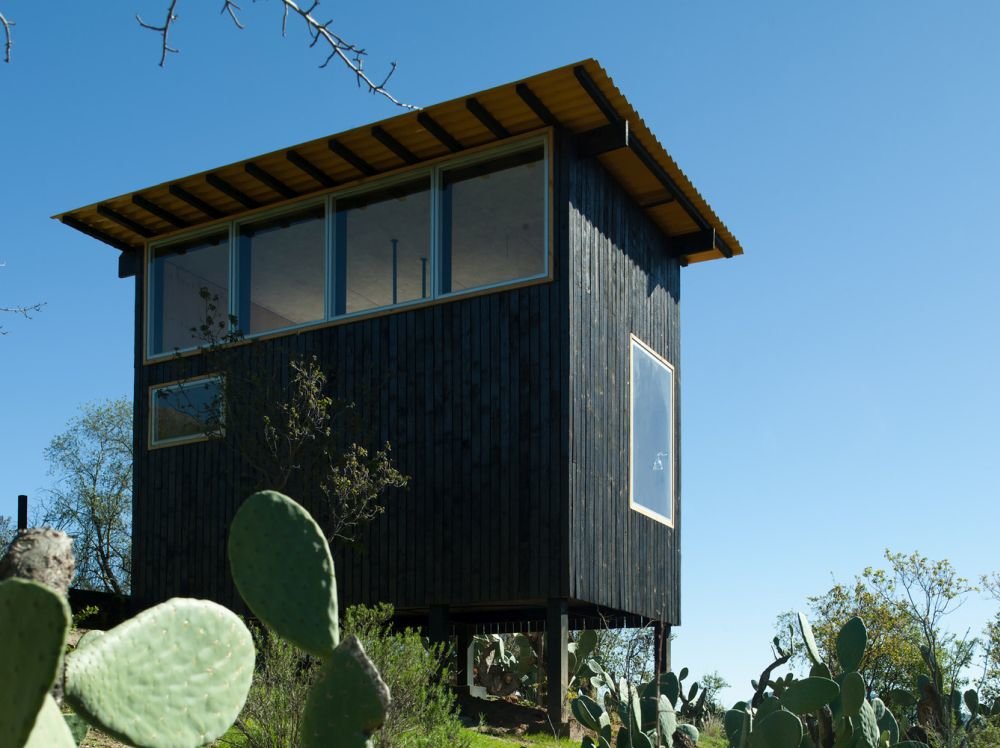 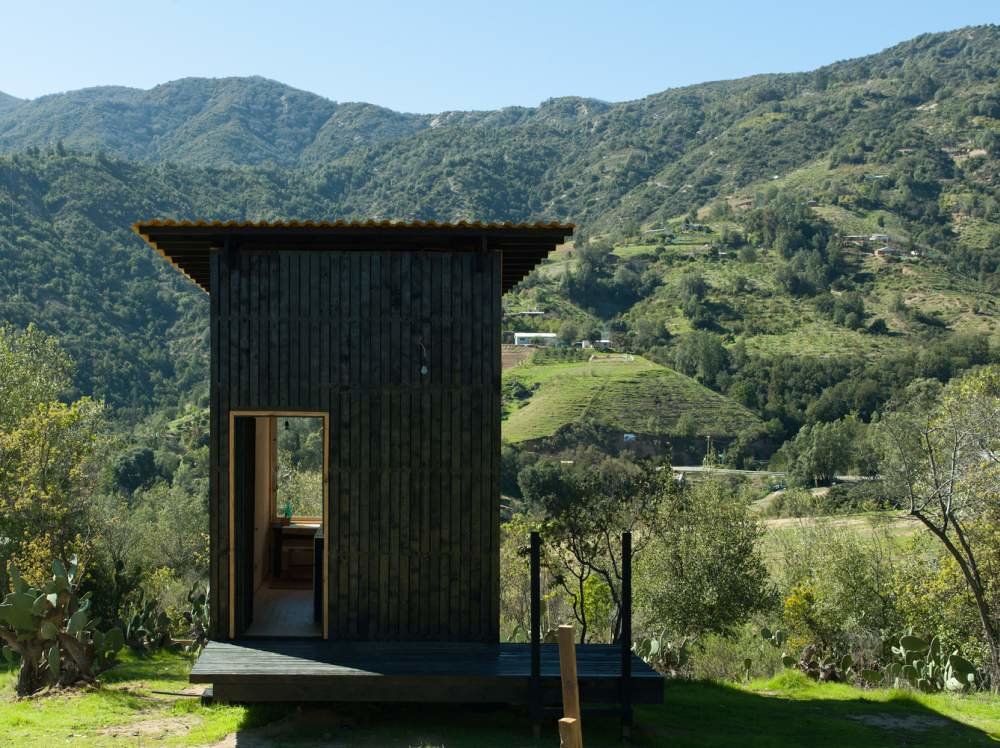 Another beautiful and also very small cabin was designed and built by studio DRAA. It’s situated in Olmue, Chile and it gets to take advantage of a lovely area with wonderful views of the mountains. Its design is simple and since this project had a small budget no unnecessary features were included.

Inside there’a s small space for cooking and eating as well as a bathroom and in the middle of the floor plan there’s a vertical steel ladder that gives access to a loft area for sleeping. Up here the windows stretch the entire length of a wall and offer a really nice view of the surroundings. 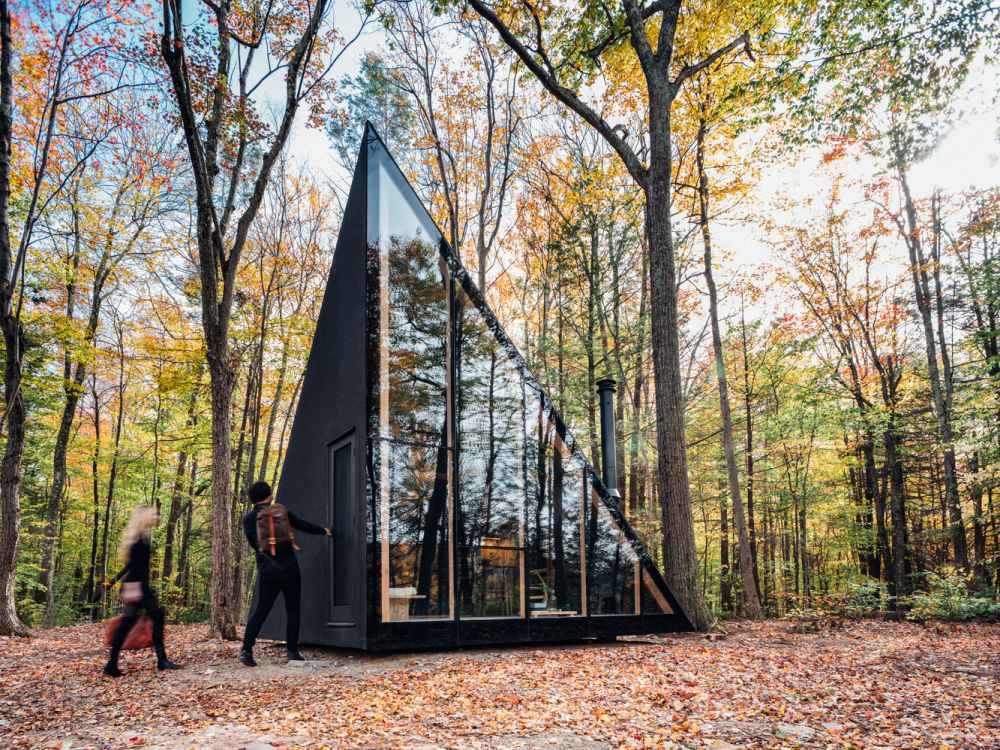 One of the most iconic small cabins is the A45 designed by Bjarke Ingels Group. It’s situated in Shandaken, U.S. and it’s only a 17 square meter structure. What helps it stand out however is its nonconformist shape and intriguing geometry.

This is the first prototype designed by the studio meant to serve as a multifunctional and highly versatile structure. From an aesthetic perspective, this is a reinterpretation of the classic A-frame cabin but with a more sculptural and contemporary feel. 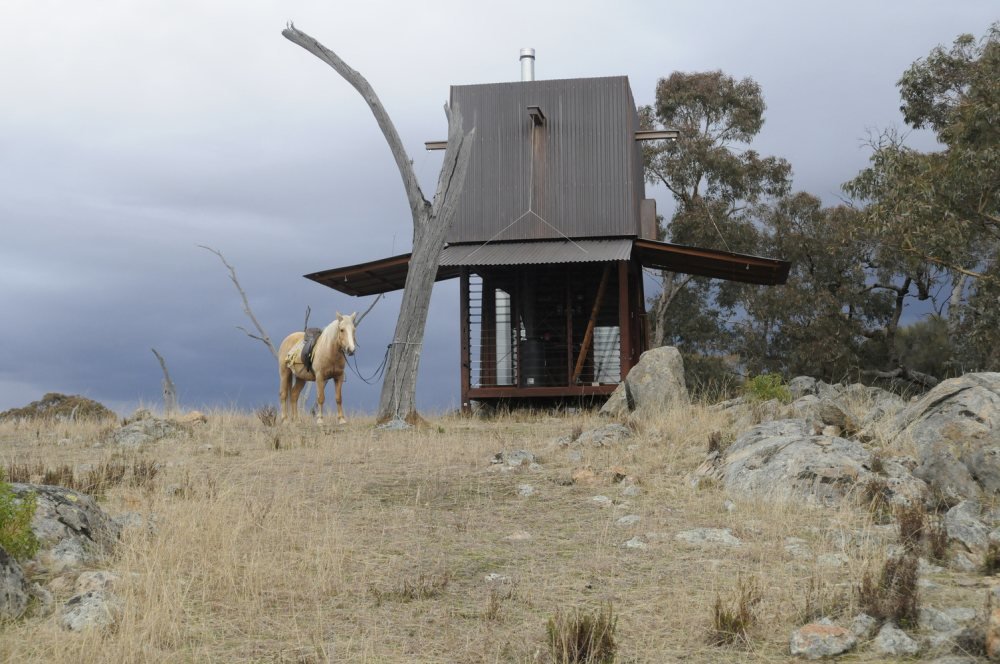 This cabin has quite a dominant presence even though it’s a very small structure. It was built in Glenroy, Australia by studio Casey Brown Architecture. The location is remote with no neighboring structures insight and that gives the cabin magnificent views in all directions.

The cabin itself is small. It has a 3m x 3m footprint and an 18 square meter interior distributed on two floors. It has this cool-looking copper-clad exterior that sets it apart from other small cabins and in addition, it features a couple of veranda roofs that can be closed down when the cabin is not used in order to completely enclose the interior.