Add a little intimacy to every meal.

Banquette seating is the surest way to add polish and comfort to a dining room, eat-in kitchen, studio, breakfast nook, game room, or really any place with a table that could use a little perch.

So what differentiates a banquette from just a normal bench or built-in? A banquette is a bench meant to provide extra table-adjacent seating, and it's usually upholstered.

If you're someone who has always preferred the intimacy and comfort of a restaurant booth instead of sitting in regular old chairs, then it's high-time you treat yourself to a banquette at home. Ahead, discover fifteen banquette seating ideas in designer spaces of all styles and spaces for cozier days ahead.

Designed by Tiffany Brooks for the House Beautiful 202o Whole home concept, this nook carves out a place for guests to eat in their very own little apartment within the larger home. Pink upholstery on the banquette ties in nicely with the window treatments and accents throughout, like the chair cushions. 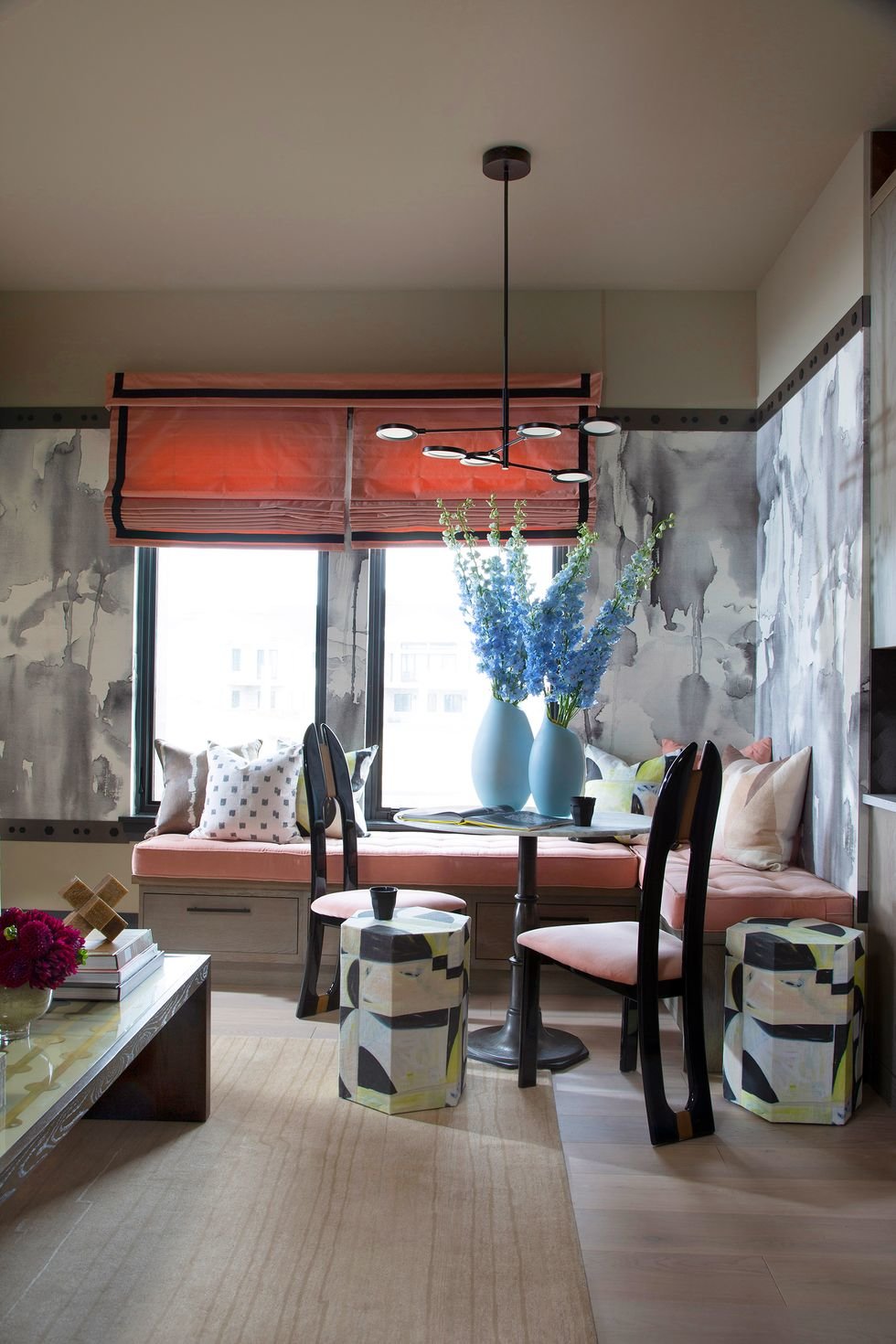 Work Around the Existing Architecture

"What I really wanted was a kitchen that felt like a library,” says designer Brittany Bromley of this space. The dark wood stain create and inky black banquette a moody English countryside feel. The windows allow for plenty of light though, so it doesn't end up feeling dark and damp. Pro tip: If you want to build a banquette by a window, work around the existing frame instead of blocking light or messing too much with the bones of the space. 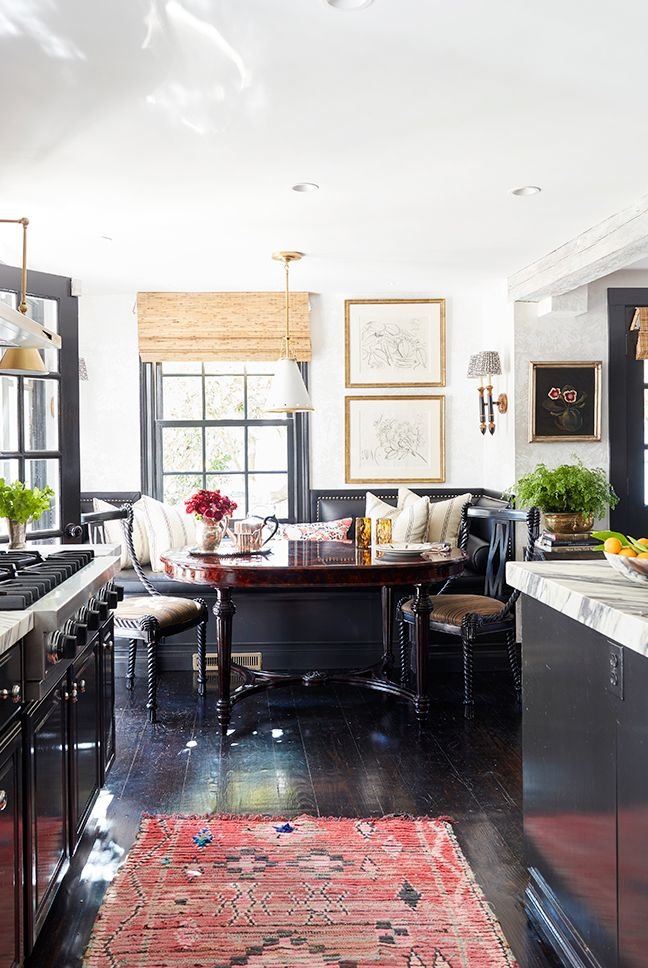 Take note from this dining nook by Emily Henderson and design with your furry friends in mind. This custom banquette features a little doorway for the occupants cats. Though it was initially going to contain extra storage space, they decided a "kitty cave" was a lot more fun. The top folds up when you remove the cushion just in case the cats need help finding another exit. How could you possibly not have a good morning in this sun-drenched breakfast nook? Designer and occupant Fitz Pullins removed the French doors connecting the kitchen to this bonus space, enhancing flow and sunlight the bright yet neutral and calming colors along with the laidback materials that reflects the his own own warmth as well as the Florida landscape. And the best part? No building necessary—the banquette seating here is just the right-sized sofa. 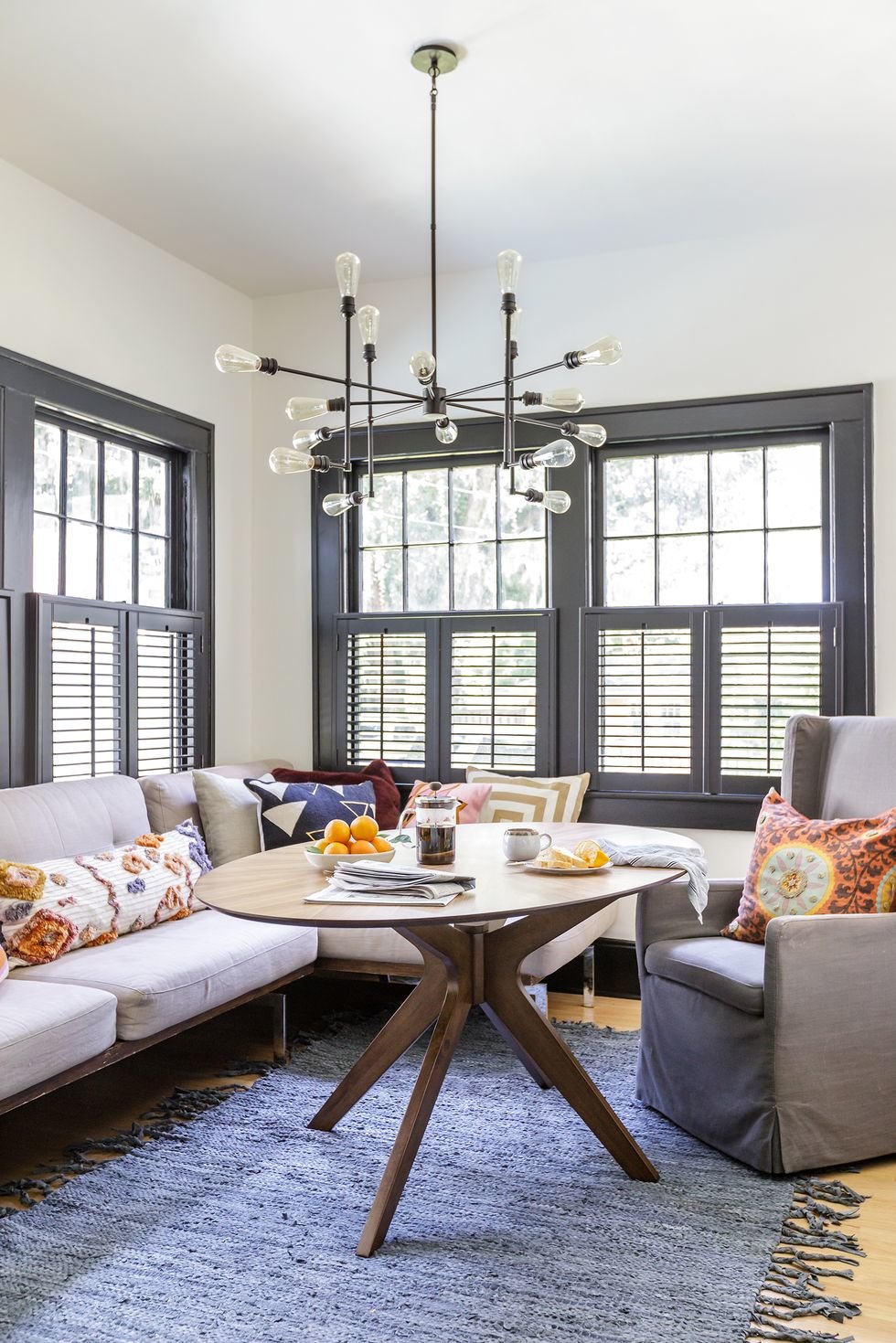 Extend It From Your Kitchen Island

Dallas-based designer Jean Liu had to strike a balance between a formal dining room and a casual kitchen since they shared the same space. So, she opted for super sleek cabinets with understated hardware complements the pendants over the dining table perfectly. The caramel leather banquette cushion is both polished and approachable and adds just enough contrast with the black dining chairs and attached gray island. 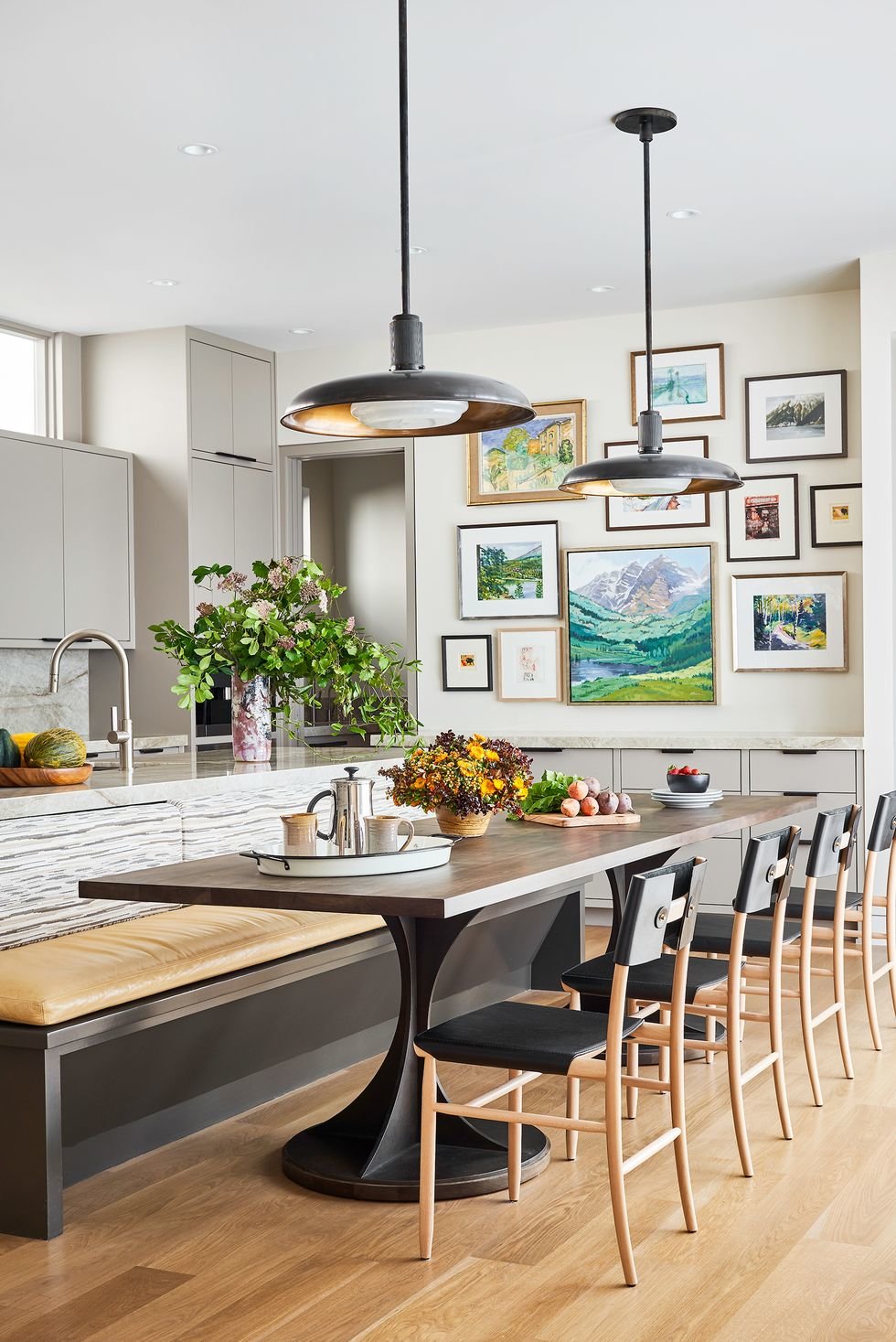 Channel the whimsy of a circus tent with fabric that features thick, bold red and white stripes. And instead of upholstering the wall behind your banquette the classic way (mimicking the back of a sofa), recreate this bolster-inspired take designed by Tamsin Johnson. Paired with moody and provocative framed photographs, casual rattan table, and modern dove gray walls, the playful banquette takes on a unique and versatile persona. 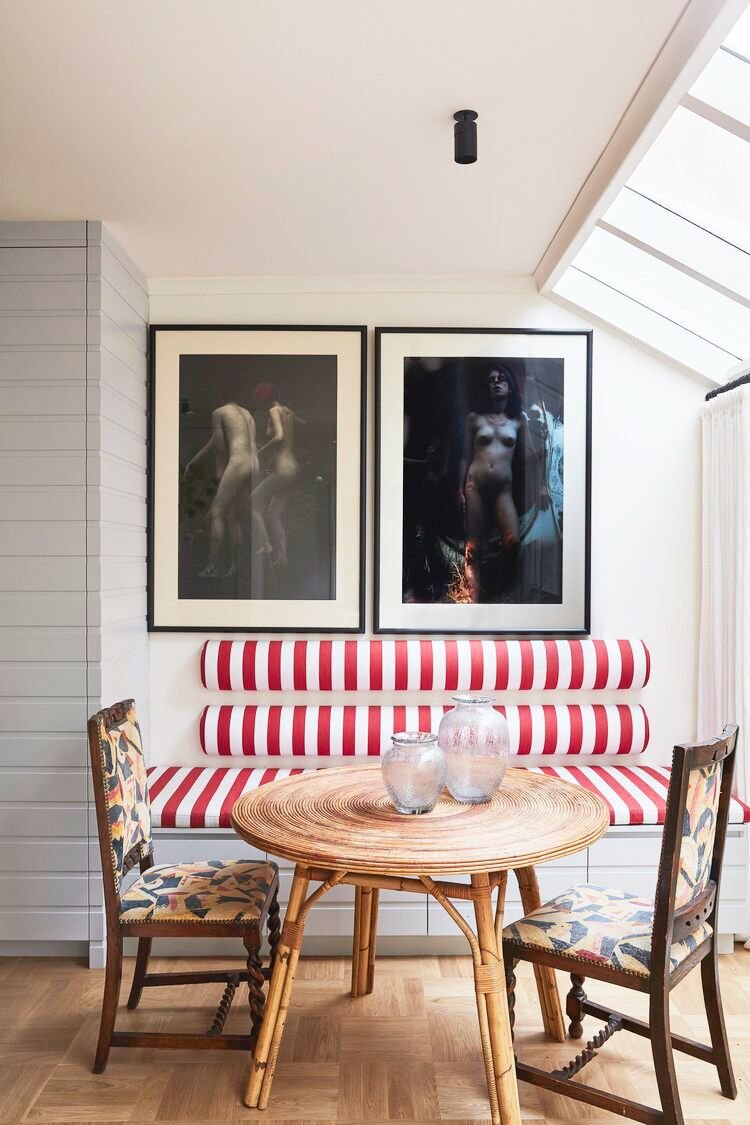 Designed by Corey Jenkins, this little nook is another great example of a small but impactful banquette that can play a few different roles, from breakfast perch to shoe-lacing spot, reading nook and beyond. 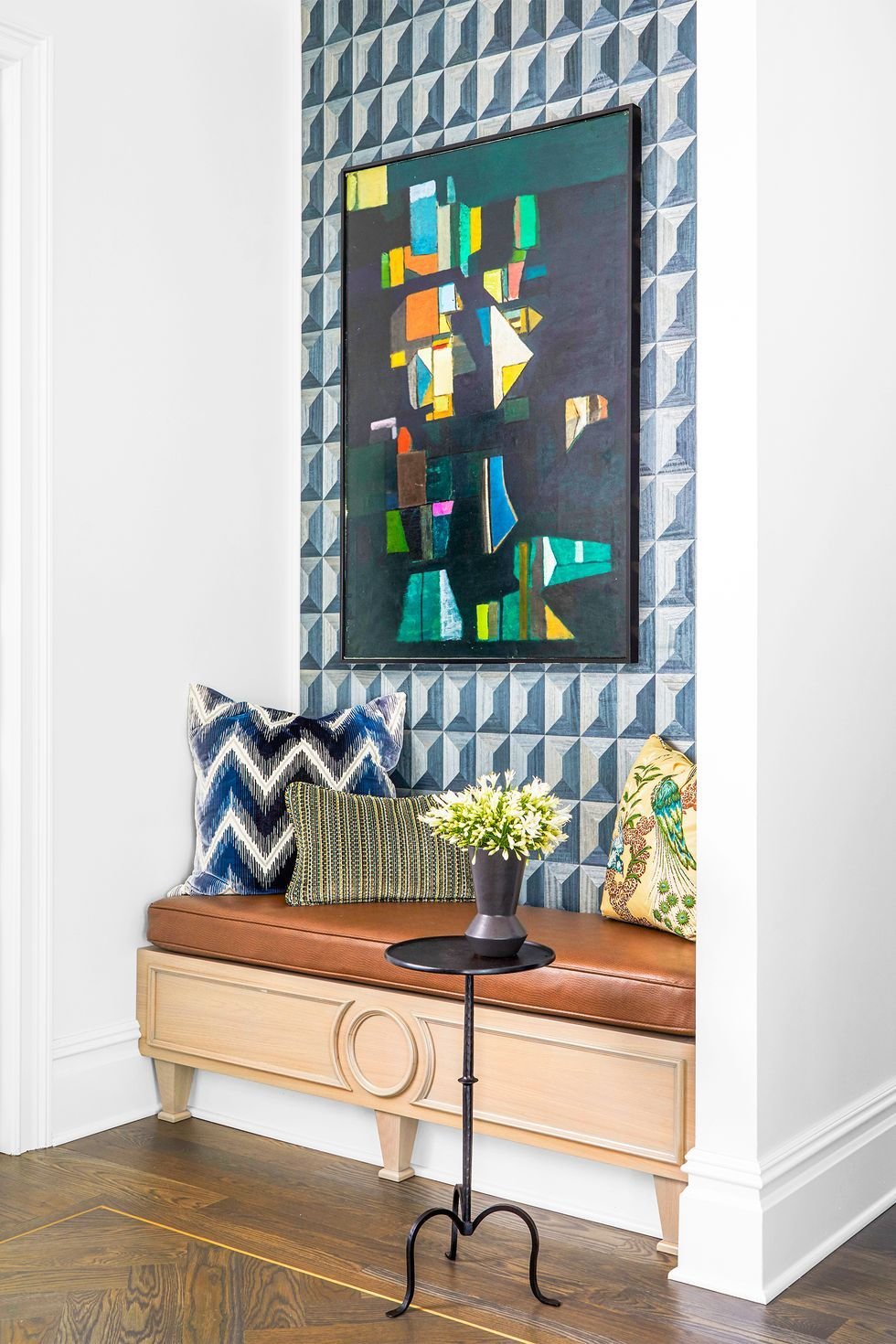 The only thing cozier than a breakfast nook is an enclosed breakfast nook. Designed by Kaemingk Design, this one is a masterclass in pared-down Scandinavian style. The warm wood materials and enclosed setting make it feel inviting and intimate and you can always swap out different cushions as the seasons change. 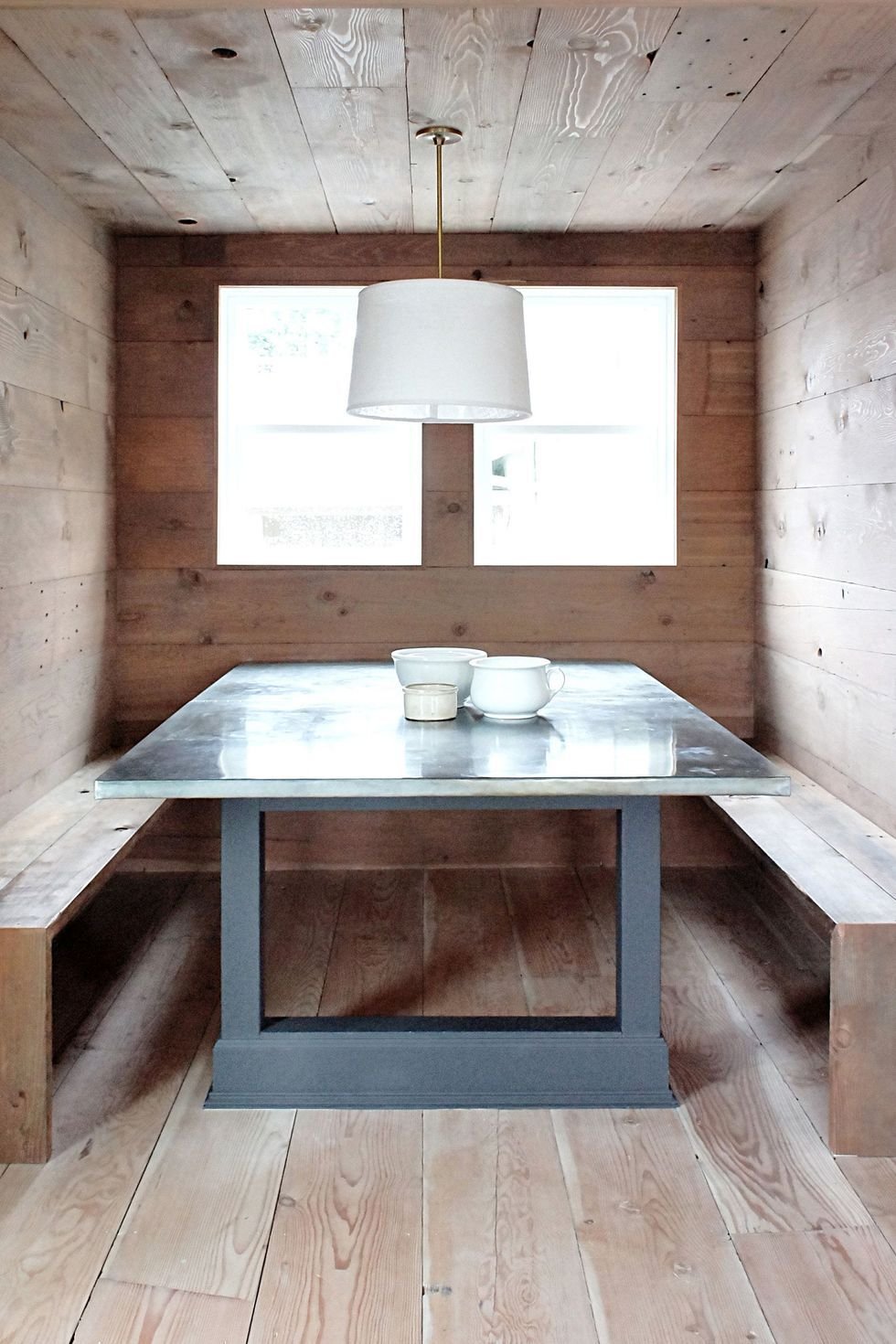 Use an Oversized Armchair

Crosby Studios used glass interiors to frame a tinny breakfast nook off a gallery kitchen. It makes the eat-in kitchen feel a little larger and distinct since it separates the cooking and dining areas—but the transparent arch ensures that the two spaces can still share the light. If you're in a super small space you don't want to or a rental that you can't alter, slide in a settee or oversized armchair. It will feel more like a banquette while still accommodating your needs. Fill It With Pillows

Interior designer Erin Shakoor doubled the seating in this dining nook with a banquette. "A banquette allows you to sit longer, more comfortably—is and with more people," she tells us. Adding pillows helps set the move even further. 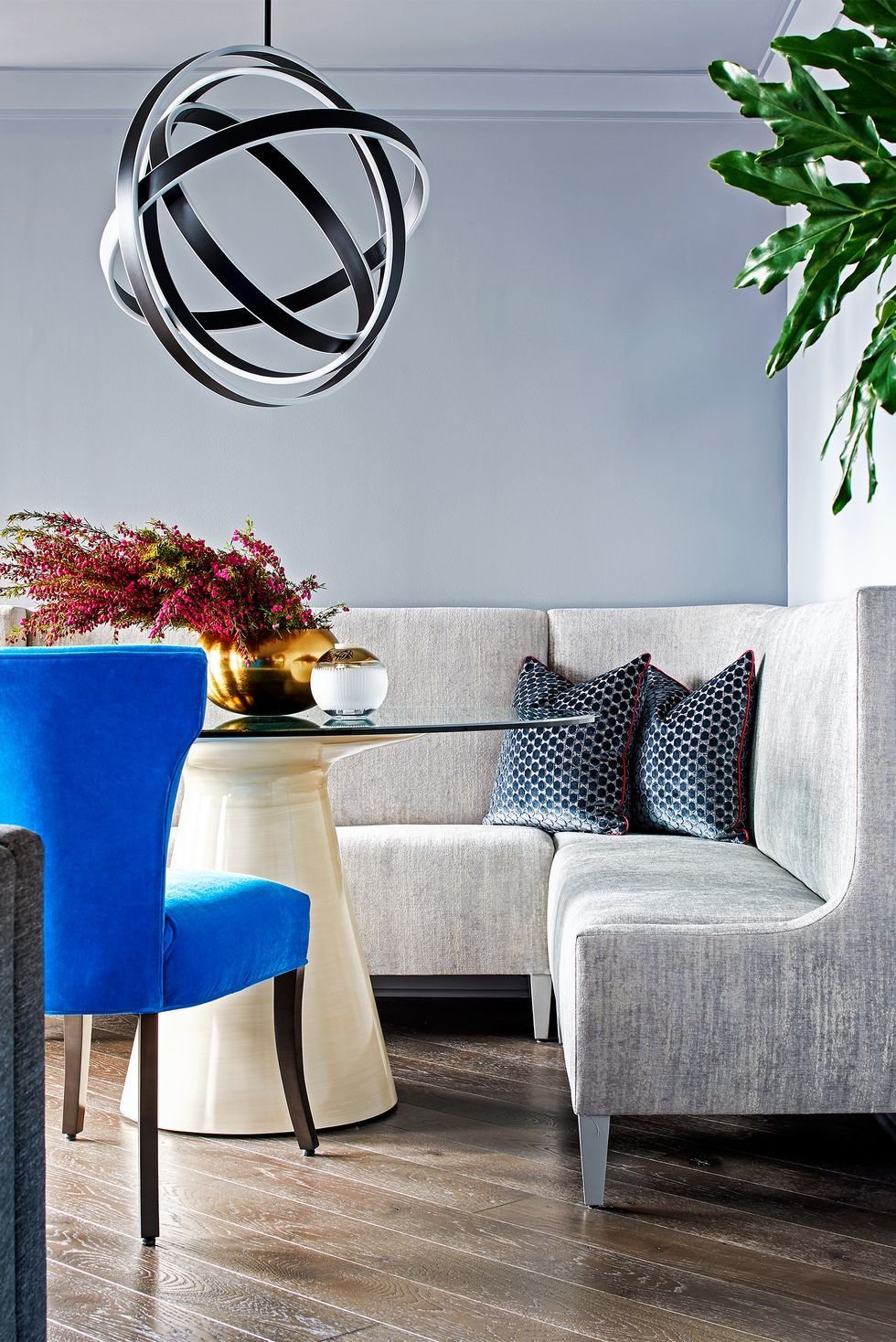 These single-seat banquettes and built-in metal table in a kitchen by GRT Architects are reminiscent of a classic midcentury diner right off the highway-perfect for this inky and sophisticated kitchen in a midcentury modern home New York's Hudson Valley. No space? No problem. A tiny window seat is the perfect spot to sip your morning coffee. This one almost makes you feel like you're traveling on luxe train. Hang the Back Cushions

Who needs high ceilings when low ones are so much cozier? Not us, especially when said low ceilings are blessed with exposed beams like these. This breakfast nook in a North Carolina home by Jane Hawkins Hoke is bursting with character and warmth. Instead of attaching the cushions to the walls permanently, Hoke hung them from hooks, making it easier to swap them out and contributing to the casual nature of country kitchen design. Designed by ETC.etera in the Firehouse Hotel, this multi-purpose nook is so immaculate. Just looking at it transports us to the Bloomsbury parlor we've always dreamed of—the one that's somehow both from the past and the future and invites you to curl up with a cup of tea and a good book no matter what era you're in. 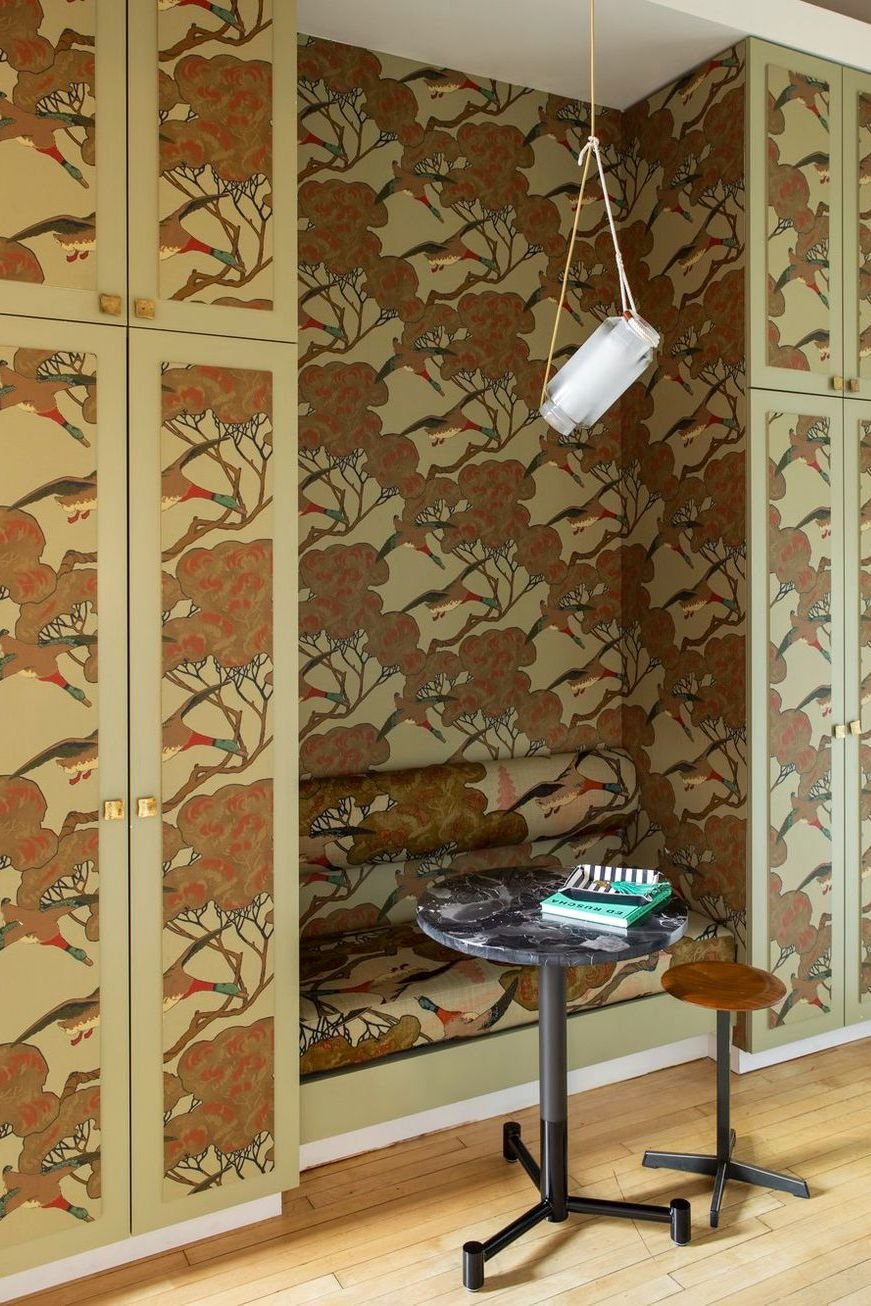 Instead of going the linear route, introduce some curvature. Here, Doherty Design Studio created a built-in banquette that plays up the rounded custom pedestal table as well as the stools, and matching tiled table base, and banquette base. Plus, it encourages better conversation. 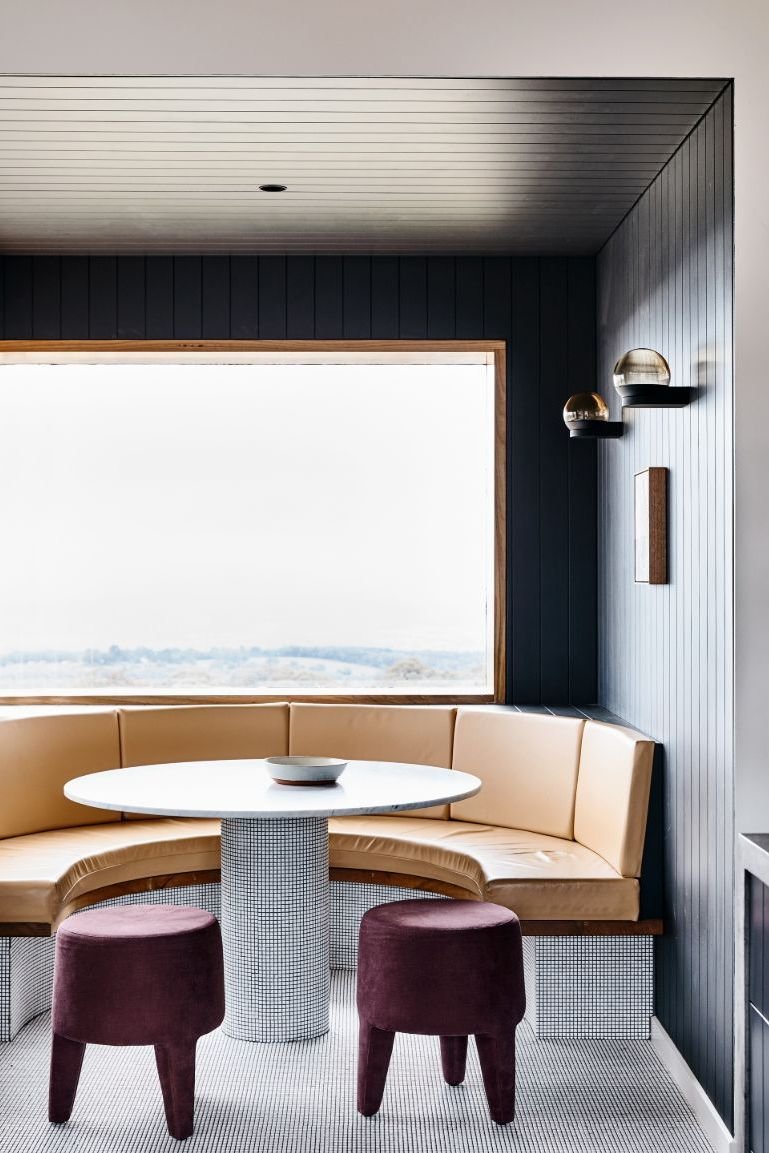